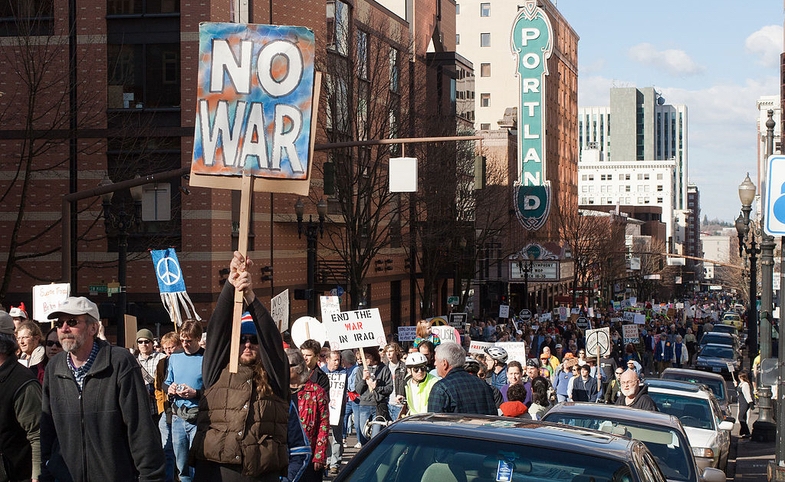 Can Social Media Reduce the Risk of War?

Recent weeks have seen growing concern over President’s Donald Trump’s use of Twitter to threaten North Korea with war. In a host of tweets, Trump promised that the United States would use excessive force, alongside “fire and fury,” if required to defend itself against North Korean aggression.

The tweets below demonstrate Trump’s open threats toward North Korea, his policy of nuclear armament and his lack of faith in a diplomatic resolution to the Korean conundrum.

I told Rex Tillerson, our wonderful Secretary of State, that he is wasting his time trying to negotiate with Little Rocket Man...

My first order as President was to renovate and modernize our nuclear arsenal. It is now far stronger and more powerful than ever before....

President Trump vows America will respond to North Korean threats with "fire & fury" in a warning to the rogue nation pic.twitter.com/UaE2rPkZ6f

The escalating tone between Washington and Pyongyang—alongside Trump’s use of Twitter to issue public threats—have caused many to wonder if social media can actually lead to war between two countries. Those who believe that social media escalates diplomatic crises offer three convincing arguments:

The first argument states that social media has increased the speed in which news travels the globe. In the 1990s, communications scholars noted a similar effect brought about by cable news channels. Known as the “CNN effect,” scholars argued that cable news channels created a 24-hour news cycle which required that diplomats continuously monitor events throughout the world and comment on these events in a timely manner. Additionally, CNN’s non-stop coverage of certain events influenced their prominence in public opinion. By reporting on the famine in Somalia, CNN placed this issue at the forefront of American public opinion forcing the administration to respond in words and actions to this crisis.

If CNN hastened the practice of diplomacy, social media has expedited it to the extent that diplomats currently practice “real-time diplomacy,” a term coined by Philip Seib. The hastening of diplomacy is especially problematic in the context of diplomatic crises which are, by nature, rapidly evolving events characterized by a lack of reliable information, stress and the need to choose between imperfect options.

The second argument states that social media can escalate tensions between states given the spread of disinformation and misinformation. Indeed rumors, exaggerations and even lies can make their way into the decision making room via social media impeding decision makers’ ability to resolve a crisis peacefully. In addition, social media bots can flood the Twittersphere with false information creating a false sense of reality among decision makers. It is terrifying to imagine what would occur if automated bots flooded Twitter with descriptions of North Korean troop movements or begun reporting on civilian casualties in Guam following a Korean strike. Even more terrifying is the thought of hackers hijacking Trump’s Twitter account and declaring war on North Korea.

For most people, Trump’s threats against North Korea appear before a video of cats playing the piano and after a friend’s engagement announcement.

The third argument states that social media can now be used by leaders to raise the political capital necessary to go to war. All national leaders require substantial political capital to declare war as these are costly in terms of lives and resources and are always unpredictable. Yet through social media, leaders such as Trump can demonize an enemy, demonstrate an opponent’s malicious intentions, frame a war as justified or necessary and assure the public of their nation’s military superiority. However, once the political capital has been raised, it is hard to walk back from the precipice of war – things that have been put in motion cannot easily be undone. Reckless leaders may thus use social media to inadvertently create the conditions necessary for war.

But one can also argue the opposite, that social media actually reduces the risk of war. Here again there are three convincing arguments:

First, as Craig Hayden has stated, recent years have witnessed the dispersal of publics across numerous websites, social media sites and forums. Some social media users get their information from Twitter, others use Facebook while still others rely on Reddit. Older internet users may prefer established new sites while younger ones may follow influential bloggers. This leads to a segmented public square in which no single medium or channel enjoys complete dominance. In other words, gone are the days in which an entire country got its information from one news channel or one newspaper. In a segmented public square, the news stories that dominate public opinion are more diverse and, consequently, the ability to focus on one single issue or crisis is reduced.

Second, social media users are erratic at best. One day the Twittersphere is buzzing with anticipation of war, the next day it is consumed by white supremacist marching in Charlottesville while on the third it is focused on Harvey Weinstein. And where social media leads, traditional media channels follow. Thus, social media may actually lessen policy makers’ need to react to crises in real time as online publics are easily distracted. Twitter may have therefore had a “reverse CNN effect” in which one news story can no longer dominate the news cycle for long periods of time.

An interesting question is can governments deliberately sway social media attention from a crisis in order to gain much needed time and gather information in a more reliable way. This would be a very sophisticated way of using social media to resolve a crisis or at the very least improve crisis management.

Lastly, it is important to remember that on social media Trump’s threat of war is but one more item in a never ending feed of tweets and posts. For most people, Trump’s threats against North Korea appear before a video of cats playing the piano and after a friend’s engagement announcement. This could suggest that the threat of war is actually reduced on social media as it becomes one more item in an endless list of occurrences. Consider the difference between the headlines of British newspapers last month, shown below, and a Twitter feed in which Korea is one more issue.

Finally, it is important to note that wars are not so easily started, even today. Consensus among elites needs to be acquired, citizens need to prepared, troops have to be deployed, allies need to be notified and targets need to be acquired.

The road to war remains a long one.