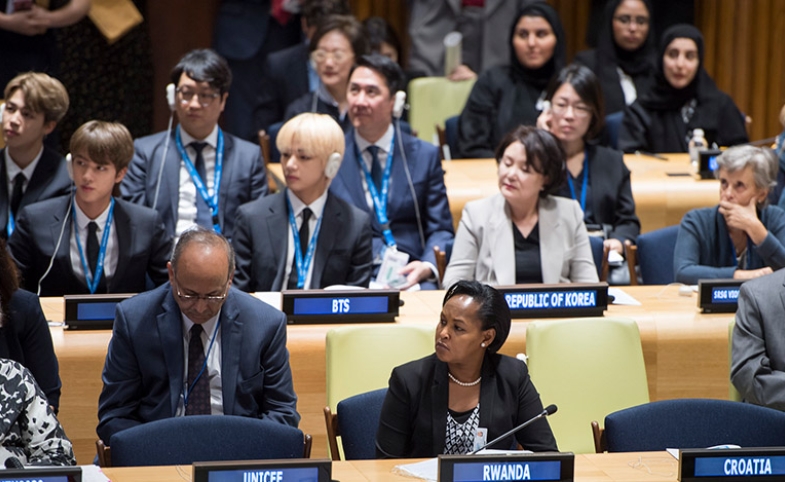 Celebrity diplomacy is an interesting topic that has received academic attention. It refers to celebrities, such as singers or actors who act for political entities such as the United Nations (UN) and governments.

The UN has long included celebrity ambassadors in various fields, such as peace (e.g., Leonardo DiCaprio as UN Messenger of Peace) and refugee protection (e.g., UNHCR Special Envoy Angelina Jolie). These celebrities do not just come from the U.S. but from other countries such as China (e.g., Chinese singer Wang Yuan as UNICEF Special Advocate for Education). Currently, about 30 Chinese celebrities act as UN goodwill ambassadors.

Raising public awareness is the primary goal of those mandates, but they do not specifically aim toward youth. Yet, targeting youth via celebrity diplomacy has become a rising trend for South Korea. Youth diplomacy emphasizes youth engagement and empowerment in the policy arena, and this has implications to be explored below.

The South Korean boy band BTS appeared at the UN as diplomatic envoys in New York on September 20, 2021. This was not their first time at the UN. They have previously excited global youth about UN causes, which notably include its Sustainable Development Goals, vaccination and youth empowerment. BTS is a group of young superstars who wield unprecedented influence, holding a number of Guinness World Records for their global popularity such as the fastest time to reach 40 million fans on TikTok. They have the power to reach their fan base of 90 million people around the world—a strong fandom network capable of exponentially spreading information both in the digital and physical worlds.

There are many others—for example, the super-influential South Korean girl group BLACKPINK was appointed in 2021 as the UN’s Sustainable Development Goals (SDG) Advocates. In the same year, they were also appointed as advocates for the UN Climate Change Conference (COP26), promoting the importance of climate action to global youth.

Contrary to traditional diplomacy that often occurs behind closed doors, scholar Andrew Cooper explains that celebrity diplomacy is a diplomatic means that utilizes star power for change. Cooper further notes that it has been used in areas such as humanitarian actions and peacekeeping missions.

Celebrity diplomacy has many benefits, such as more effectively raising awareness of global issues. With their huge fan base mainly consisting of youth, these celebrities can act as powerful leaders and closely engage with younger generations. Scholars Saskia Postema and Jan Melissen noted that “celebrities’ visibility and influence have provided the UN with a convenient, even necessary, bridge through which the UN can enhance its presence” among the public. Youth activism and engagement in a number of policy fields, such as environmental protection, are top priorities for the UN. Notably, former South Korean President Moon Jae-in pointed out that BTS’ diplomacy “was much more effective than the UN Secretary General or myself delivering hundreds of speeches.”

However, celebrity diplomacy is not without its criticisms, such as issues regarding the celebrities’ independence and representativeness. In terms of independence, a celebrity diplomat acting on an international issue may have national interests to safeguard, or feel the moral need to align the issue with their national interests. For example, Postema and Melissen noted that the Chinese government “has an overriding interest in using Chinese stars and role models to promote nationalist narratives, and offers little scope and tolerance for deviant messaging in China's infosphere.” In terms of representativeness, only celebrities from a very limited number of countries, such as the U.S. and South Korea, have made it into the diplomatic arena—leaving many regions unrepresented.

This piece will not reiterate the considerations of celebrity diplomacy and the effectiveness of BTS’ public diplomacy, which have already been explored. Instead, it will discuss the potential implications of this recent development, where celebrity diplomacy is specifically targeting youth audiences.

Instead of merely raising youth awareness of policy issues, youth diplomacy cultivates individual activism at both local and global policy levels. The political implications are more controversial in some jurisdictions. For example, there are reportedly some governments that prefer youth to be politically apathetic on certain matters like environmental policies. Supporting UN causes at the national level does not necessarily mean that the government would support local youth activism on the very same causes.

Naturally, after listening to powerful messages from UN youth diplomats, impassioned youths would expect their local governments to take action to implement UN causes. However, the superstar marketing of UN targets could easily divert the focus away from the local practicality and priority.

Policy implementation requires tremendous expertise and long-term commitment, not just passion. If the UN’s calls cannot be achieved locally (e.g., due to structural or economic reasons in some developing countries)—especially when youth have been stirred up with high expectations and excitement—this could cause backfire and cause frustration over the UN’s goals. Youth populations may also blame their governments for their inability to deliver.

Besides, BTS are accorded the political status status of South Korean diplomats and envoys. This transcends the boundary of cultural influence. From a political standpoint, some governments may find it problematic if local youth—who become ardent followers—incline toward foreign ideals and policies. For example, China has allegedly limited the overwhelming external influence of “Korean wave” (otherwise known as “Hallyu”). This was done by way of a ban on South Korean entertainment content (otherwise known as “Xianhanling,” though the Chinese government denies its existence). There are concerns that some citizens may become overzealous about South Korean culture, thereby undermining local values.

Ultimately, the promotion of youth activism does not sit well with the cultures of some societies. It may be subject to stigmatization, partly because activists are culturally seen as neglecting their studies, work and personal development contrary to social norms.

South Korean celebrity youth diplomacy has an unprecedented, overwhelming reach of transnational influence—both culturally and politically. With the target audience being youth—who generally have high proficiency with effective communication means such as social media—the impact of diplomatic and political messages can easily multiply and directly affect local policy discussions and developments. In light of such, this developing trend and its implications deserve further attention. For example, interesting questions would include how this positively and/or negatively influences other countries, and how governments respond to the hype of youth activism.

In conclusion, this strategy of influencing local policy spheres, which leverages South Korean superstars’ influence unique to youth audiences, marks a new direction for not just celebrity diplomacy but also for youth activism.