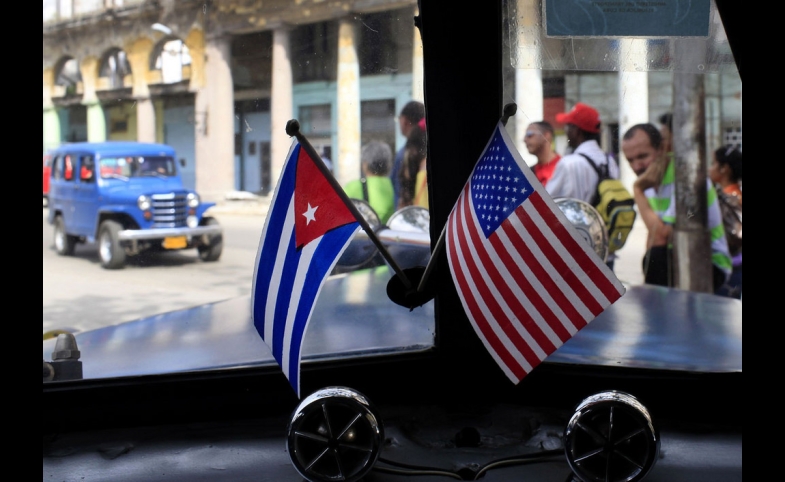 After more than 5 decades of estrangement, the United States and Cuba are set to restore full diplomatic relations with the reopening of their respective embassies this coming week. The move is historic -- and instructive in the dual lessons of why isolation does not work and why engagement does -- especially in an era of globalization.

When President Obama announced the U.S. policy shift this past December he said, “These 50 years have shown that isolation has not worked. It’s time for a new approach.” Sanctions and isolation have long been powerful economic and political tools used to influence other governments. Noteworthy, these powerful tools are often initiated and imposed by stronger nations on weaker ones.

This often over-looked power imbalance may explain why sanctions and isolation rarely produce the desired results. While the intent may be to harm the government, more often it’s the people who suffer most. And, while the hope is that the people will turn against the government, the reality is that externally imposed punishment can generate a shared sense of injustice, resolve and unity between the beleaguer public and government.

While U.S. policy has been trying to politically isolate Cuba, Cuba has steadily expanded its global engagement though its medical diplomacy. Over the past five decades, Cuba has built an international reputation as a leader in global medical assistance, sending some 135,000 health workers for emergency response or to underserved communities around the world. A New York Times editorial cited Cuba’s international medical work in its call to restore diplomatic relations.

Cuba began its emergency medical mission in 1960 by sending a medical contingent after an earthquake in Chile. In the decades since, Cuba has been among the first and most effective responders. The New York Times editorial highlighted Cuba’s role in the deadly Ebola outbreak last year in West Africa: “While other countries sent funds, Cuba sent what was needed most: medical personnel.” Despite the risks of exposure, Cuban doctors and nurses worked alongside their counterparts in Sierra Leone, Liberia, and Guinea.

This kind of direct person-to-person, life-saving assistance is why “medical diplomacy” can carry more powerful and sustained impact than cultural, sports, or arts diplomacy for the people -- and for governments.

While U.S. policy has been trying to politically isolate Cuba, Cuba has steadily expanded its global engagement though its medical diplomacy.

Several relational features of Cuba’s medical diplomacy are particularly noteworthy. Cuba’s “community-based” approach provides medical services within the community, including homes, schools, and workplaces. Taking medicine to the people can have an impact not only on individuals, but also on the health and stability of the society. The behavior of Cuban media personnel, who will often go where other physicians won’t, is also a significant factor. During the Pakistani earthquake relief efforts, Cuban earned “the enduring respect of common Pakistani citizens because they stayed in working-class neighborhoods or tents and spend modest sums of money,” according to Bustamante and Sweig, who wrote on Cuban public diplomacy.

Consistency has also added to Cuba’s credibility and reputation. In addition to emergency medical relief, Cuba has provided medical assistance programs and training. It started offering extended medical assistance programs in 1963 at the request of the Algerian government. Nearly 100 countries have since requested and received such assistance. In 1999, the Cuban government established the Latin American School of Medicine (ELAM) to train medical, dental, nursing students, and technicians. Over the years, it has provided scholarships to help train more than 12,000 physicians from Africa, Asia, and the Americas.

Notably, the growth of Cuba’s medical programs occurred during the 1990s, after the fall of the Soviet Union. An example of one its major initiatives was the Caribbean region-wide ophthalmological surgery program called Operation Miracle. Through this program, doctors performed 750,000 eye operations, helping to preserve the gift of sight for the region’s poor. As former British diplomat Sir Ronald Sanders noted, “The important thing about the Cuban programme of medical assistance is that it is consistent.”

Finally, and perhaps ironically, the sanctions that have impoverished Cuba have only added to the symbolic value of the country’s medical assistance. Cuba is often described as a tiny island nation. Yet Cuba has more medical professionals abroad than the World Health Organization, and consistently sends emergency teams to disaster zones, according to Julie M. Feinsilver, author of Healing the Masses: Cuban Health Politics at Home and Abroad. Cuba’s relatively limited economic means as a small developing country, she says, means that its medical diplomacy carries great symbolism both for recipient countries and their publics.

In an age of increased interconnections, pursuing engagement rather than isolation not only makes sense but also appears more fruitful.

The Dodgers Go To Cuba

Dodger players Yasiel Puig and Chase Utley, along with other Major League professionals, visited Cuba this month on the first MLB goodwill mission in 16 years, inspiring hope that Cuban-American relations are headed for...