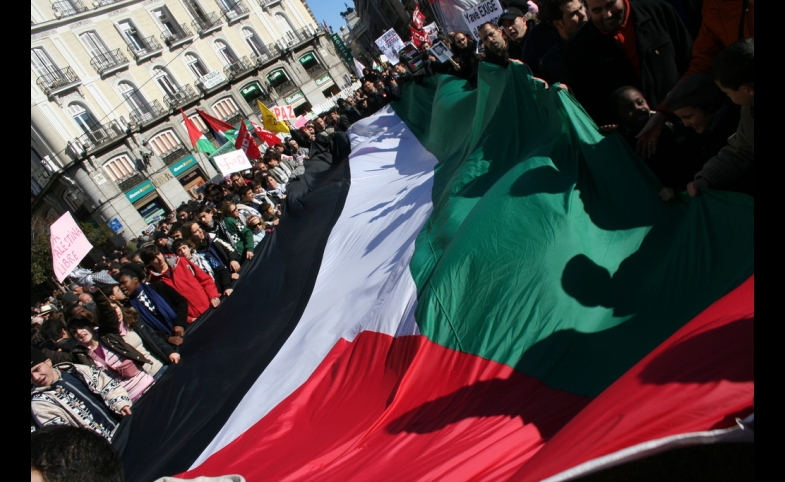 From a diplomatic perspective, Palestine represents a puzzling case study. On the one hand, Palestine has been recognized as an independent state by the UN General Assembly. On the other hand, it is not a full member state of the UN. Additionally, in some countries one may find a Palestinian embassy while in others one may only find a Palestinian Office of Interests. The level of representation differs as some countries recognize Palestine as an independent state while others regard it a semi-autonomous entity. As such, Palestine exists in a state of diplomatic limbo.

The issue of Palestinians' diplomatic representation is also complex, as Palestinian diplomats do not necessarily represent Palestinian citizens. For instance, Palestine is represented in the U.S. by a Palestine Liberation Organization mission. Yet the PLO does no govern the lives of Palestinians living under the rule of Hamas in the Gaza strip. Since Hamas and the PLO do not fully recognize one another's sovereignty, Palestine exists in a state of internal limbo as well.

The Presentation of Palestine Online

The complexities of Palestine's diplomatic standing have not prevented its diplomats from migrating online. Like most foreign ministries, the Palestinian ministry operates a plethora of social media accounts at both the embassy and national level. An evaluation of content published by these accounts suggests that the Palestinian digital diplomacy strategy focuses on three aspects: demonstrating international recognition of Palestinian sovereignty, seeking digital recognition and presenting Palestine as a "state in the making".

Many Palestinian embassies focus their efforts on demonstrating international recognition of Palestinian sovereignty. For instance, in the tweet below the PLO delegation to the U.S. informs followers that Algerian geography school books have been recalled, as they failed to label Palestine on maps. As such, the mission informs followers that Palestine does indeed exist as a sovereign state with internationally-recognized borders. 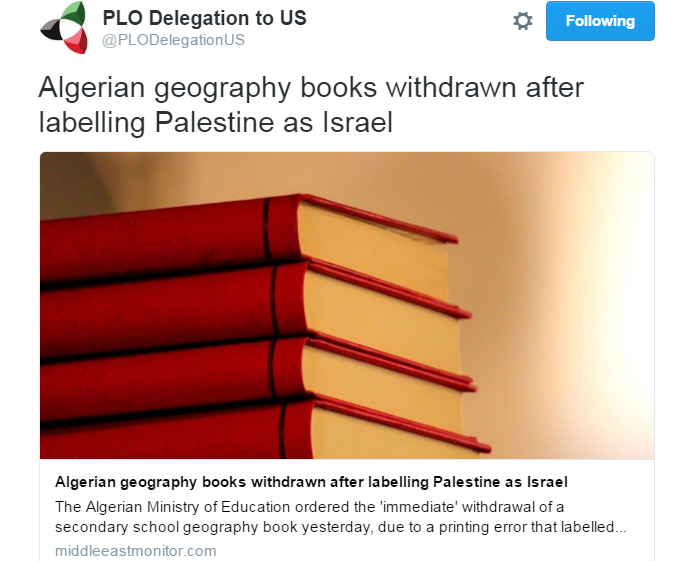 The Facebook post below, published by the Palestinian Embassy in Zimbabwe, also portrays Palestinian sovereignty by informing followers that the Palestinian flag shall soon be raised at the UN headquarters in New York. This again attests to the international recognition of Palestine as an independent state. 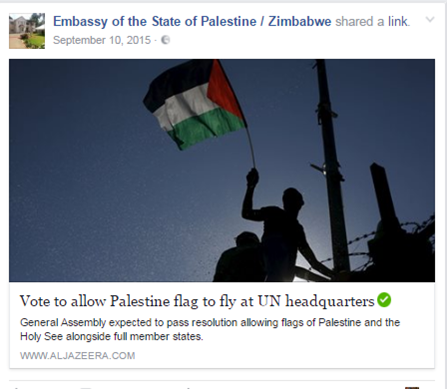 Additional content published online seems to portray Palestine as a state like any other. For instance, the tweet below includes a message of condolence from Palestine to the people of France following the terror attacks in Nice. Notably, the image included in the tweet begins with the words "State of Palestine". This tweet may be seen as an attempt to portray Palestine as an integral part of the international community, a state like any other that stands shoulder to shoulder with other countries in times of tragedy. 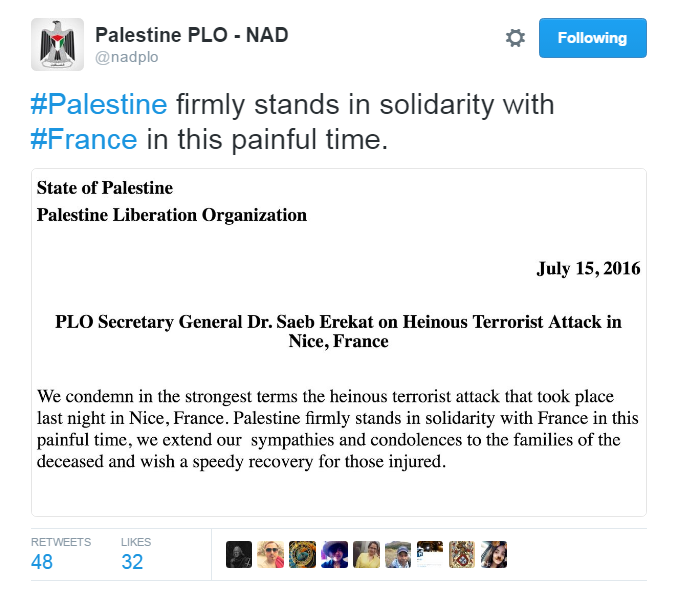 Lastly, Palestinian embassies also emphasize the fact that global powers now acknowledge Palestine's standing as an independent state. The tweet below, published by the PLO's negotiations bureau, suggests that France recognizes that Palestine has the same rights, and responsibilities, as Israel. Thus, this tweet portrays Palestine as Israel's equal rather than a quasi-state. 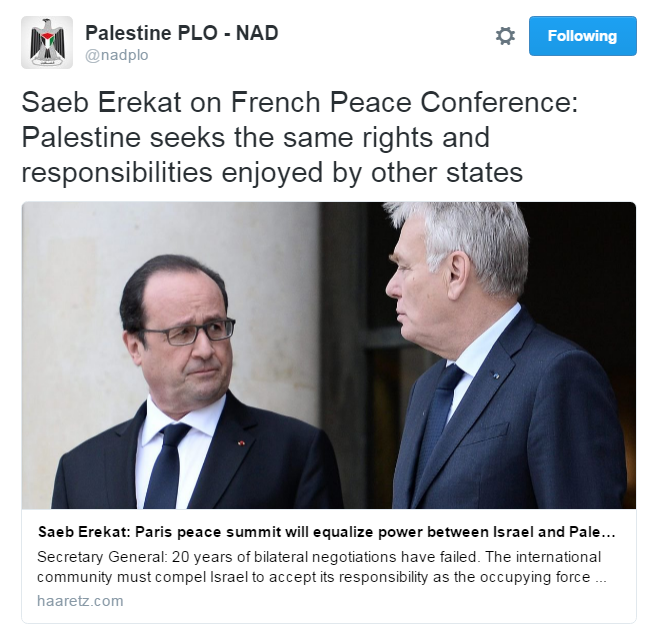 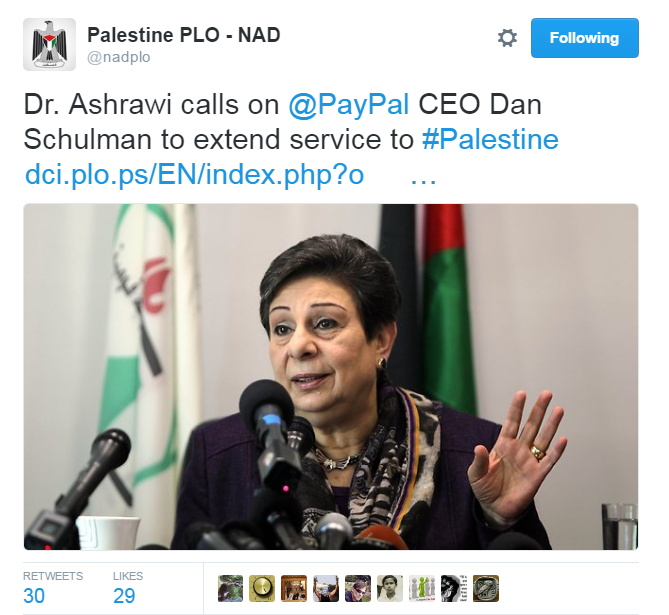 Similarly, in the tweet below the PLO mission to the U.S. called on its followers to sign a petition demanding that Palestine be clearly labeled on Google Maps. At the moment, Google Maps only marks the borders of the West Bank and the Gaza Strip without labeling them under the name Palestine. 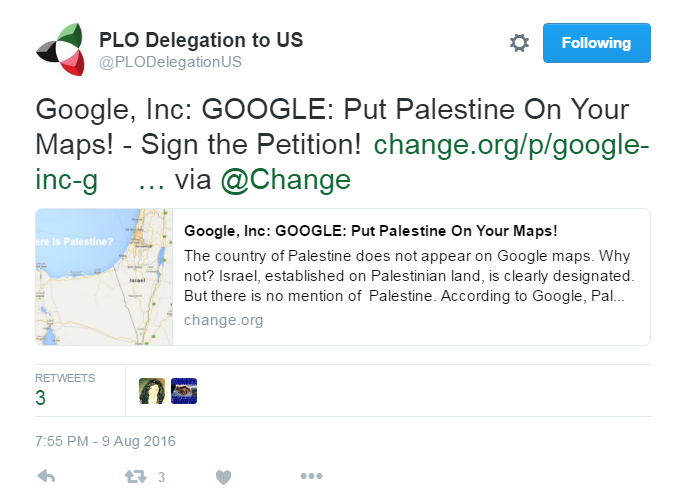 Palestine's embassy to Japan also took to Facebook to encourage followers to sign a petition demanding digital recognition of Palestine in Google Maps. The post (seen below) also includes an image taken from Google Maps that clearly labels Israel but not Palestine. 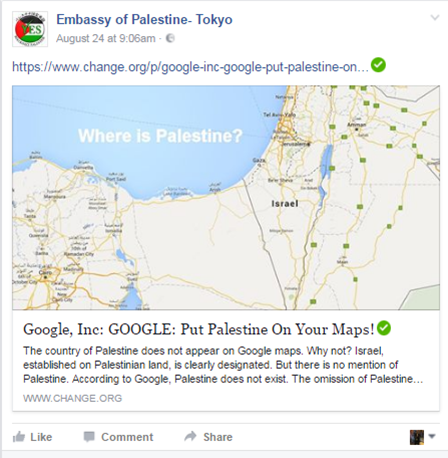 The Palestinian Embassy in Copenhagen took a different approach, by publishing a video containing historical maps that all recognized Palestine prior to the establishment of Israel. This video, seen below, asserts that Palestine has always been recognized offline and must now also be recognized online. 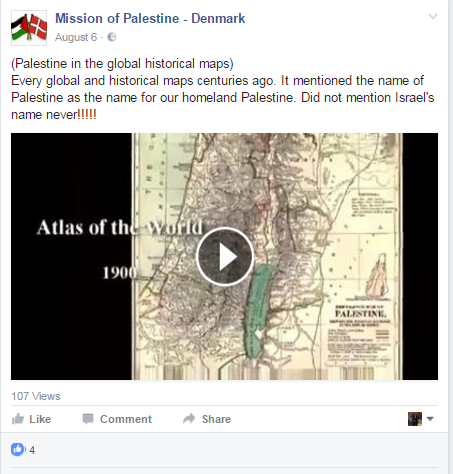 A State in the Making

The third aspect of Palestine's digital diplomacy strategy focuses on portraying Palestine as a state in the making, one that has created the institutions necessary for statehood. For instance, the Palestinian Embassy in Japan recently published a Facebook post informing followers of investment opportunities in Palestine. The information in the post was authored by the Palestinian Investment Promotion Agency, a national institution tasked with laying the financial foundations of the Palestinian state. 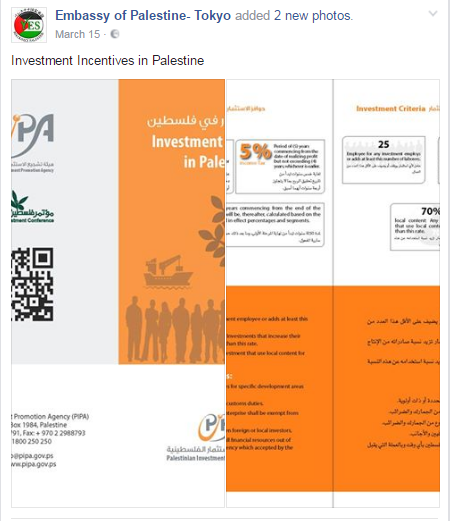 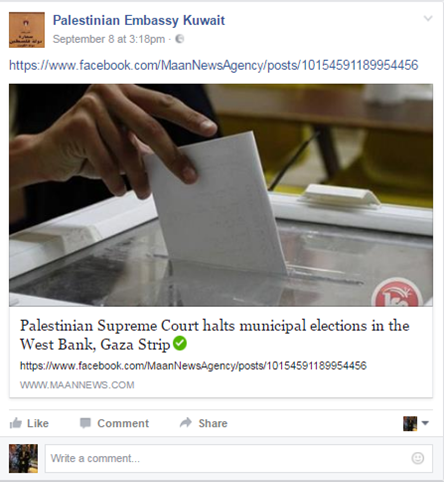 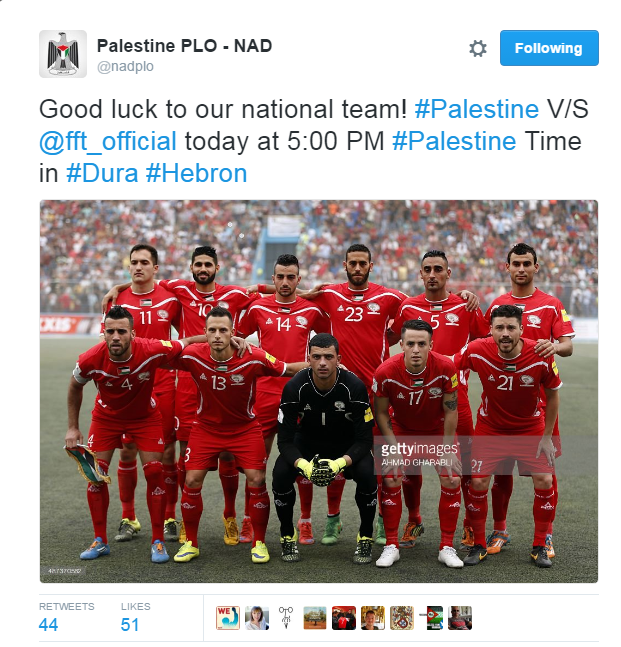 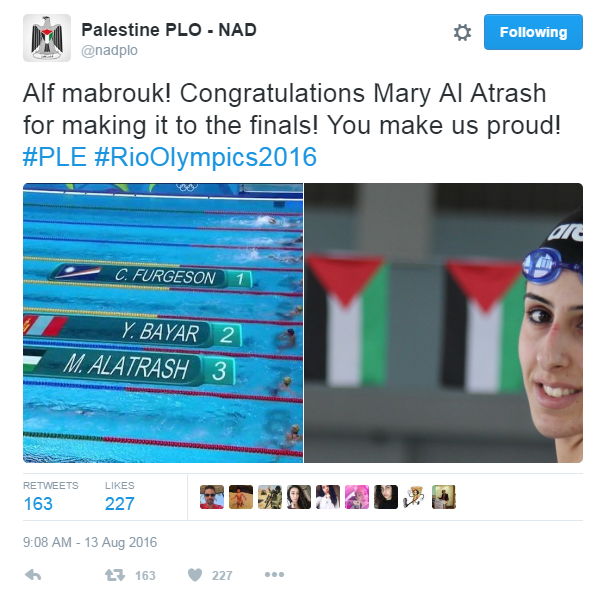 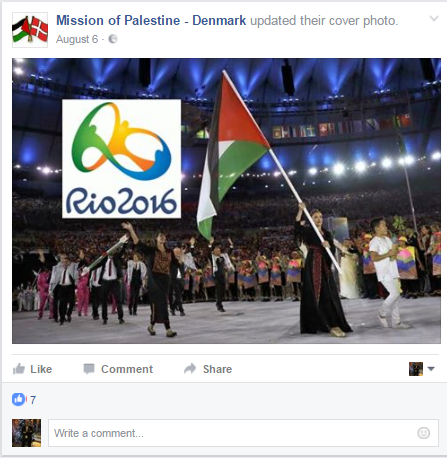 Photo by Carlos Capote I CC 2.0