Home|Pakistan: Neither Friend Nor Foe… Yet

Pakistan: Neither Friend Nor Foe… Yet

Each year, Google hosts a conference called “Zeitgeist,” organizing presentations and discussions surrounding the most popular search queries of the past year. Much is learned about the zeitgeist through Google searches.

Try this one. You'll see that, "with friends like this, who needs enemies" is a particularly popular phrase regarding Americans' view of Pakistan.

The latest issue of the Atlantic Monthly devotes a major cover story to Pakistan. Neither the article nor the cover (a photo of a grubby jihadist) capture Pakistan's most flattering side, and the title, "The Ally From Hell" does not appear to do so either. 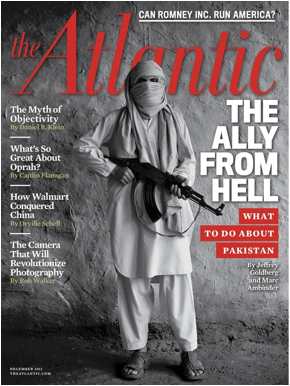 These are fascinating discussions, yet foreign policy circles kid themselves when they ask whether Pakistan is a friend or an enemy of the United States.

It is a nation that has descended into a de facto civil war. Figuring out whether Pakistan is an enemy of the United States, at this moment, would be akin to asking the U.S. in 1862 if it was pro-slavery.

The best answer, of course, is, "Can we get back to you on that?"

The Atlantic article, by Jeffrey Goldberg and Marc Ambinder, is thorough and disturbing, yet it says nothing new.  Yes, we know that elements of the Pakistan military and intelligence units are secretly funding America's enemies even while receiving American funding. (In a related vein, google "Pakistan" and "double game" to catch another example of the Western foreign policy zeitgeist.)

Goldberg and Ambinder spend thousands upon thousands of words burying Pakistan before concluding that they need to dig it back up, thanks in part to the balanced perspective of a regional scholar such as Stephen Cohen:

To Stephen P. Cohen, the Pakistan analyst at Brookings, the administration’s singular focus on al-Qaeda means that American policy makers are not focused on larger issues. The rationale for continued, even heightened, engagement with Pakistan, he said, is that the country is 'too nuclear to fail.' The arguments made by the administration about the importance of focusing on al-Qaeda at the expense of focusing on Pakistan per se remind Cohen of arguments from the Cold War. 'It’s the same line I heard 20 years ago in the State Department,' he says. 'The program was to get the Soviets out of Afghanistan. We privileged one goal over another. In Pakistan we have several goals, but we are ignoring the Pakistani nuclear-weapons program, ignoring India-Pakistan relations, ignoring the country’s growing societal degradation. We have to have a better policy than keeping our fingers crossed.'


Cohen is right. But ideally, the U.S. needs to go past an obsession with narrow strategic interests and seek to build a genuine relationship with the people of Pakistan. Those people are convinced—with good reason—that U.S. policy-makers see India as a valuable long-term strategic partner and Pakistan as a nuisance to be managed. In a shame-and-honor-based society such as Pakistan, that turns an America-envying country quickly into a jilted lover.

Being friends with Pakistanis would involve more than granting military and even civilian aid. It would also require convincing Pakistanis that the U.S. would be as protective of it as it would be of other allies in case that jumpy nation's security were genuinely threatened by its arch-nemesis India. Pakistan may be a bit paranoid about India, but the contempt is mutual on both sides; and if the U.S. cannot offer Pakistan that kind of balanced support, we might as well plan on being Pakistan's enemy, because that is how they will see us.

Pakistan is afflicted with dysfunction and a toxic culture of victimization, and if we choose to make them a friend rather than an enemy, we will need to patiently incentivize them to move beyond their lengthy list of real and imagined grievances against the outside world.

Is Pakistan a nation run by incompetent civilian leaders? Bear in mind that the bumbling and corrupt exile (and now president) Asif Ali Zardari was visited upon Pakistan by the Bush Administration. He is the gift that keeps on taking.

Is Pakistan naïve for worrying too much about India? Perhaps, but U.S. policymakers have done much to portray the coming century as a battle between the U.S. and India on one side and China (who Pakistan considers to be its only “all-weather friend”) on the other.

Are Pakistanis lax about fighting the jihadists in their northern frontiers? Yes, but many Washington liberals who scolded the Bush administration for ignoring the "hydra effect" when chasing terrorists have now infuriated even the most pro-American Pakistanis who have grown weary of hearing about American drones blowing up wedding parties.

Ultimately, Goldberg and Ambinder's shock-jock approach to this delicate and deadly relationship is likely to only breed greater antagonism between Pakistan and the U.S., even though that is ironically the opposite of their goal.

“I destroy my enemies,” Lincoln said, “when I make them my friends.” As of yet, Washington has yet to buy into Lincoln’s principle in South Asia.