Home|Public Diplomacy and Trust-Building in Iraq, Part I 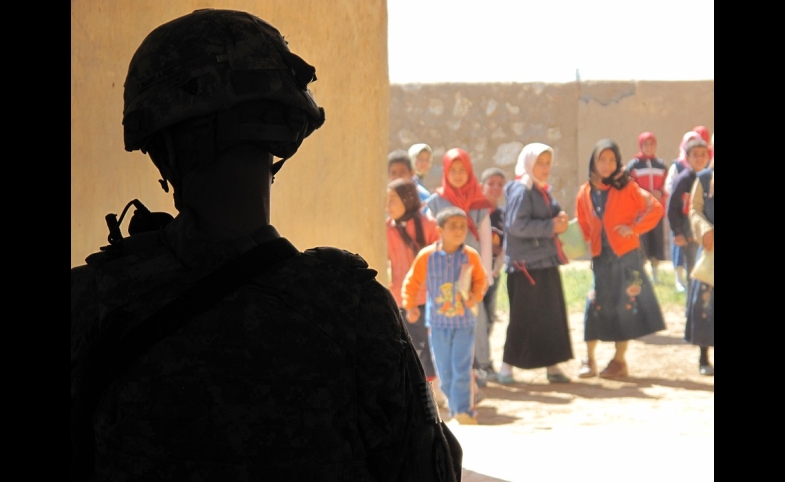 Part I of a two-part series looking at American public diplomacy in Iraq.

One of my biggest surprises serving as a U.S. diplomat in southern Iraq over this past year was the fact that many Iraqis, including the majority Shia population, believe that the United States is somehow in cahoots with the Islamic State, or Da’esh. Make no mistake—the Middle East is rife with conspiracy theories about U.S. motives—but this one was particularly jarring given that the United States is engaged in a costly and very public effort to “degrade and defeat” Da’esh, a terrorist group which aims to kill the “rejectionist” majority Shia, among other groups. The United States has carried out tens of thousands of airstrikes targeting the group in Iraq and Syria, and U.S. airpower, intelligence, and training have been critical to the success of the Iraqi army and Popular Mobilization Force in liberating cities such as Ramadi and Fallujah. This is in addition to hundreds of millions of dollars in U.S. humanitarian assistance, which helps to support the nearly 3.5 million internally displaced Iraqis.

Public Affairs professionals in the State Department and U.S. military publicize U.S. assistance in the war on Da’esh loudly and consistently to Iraqis, and yet the notion that the U.S. secretly supports the terror group as a way to divide Iraq persists. I heard it repeatedly, from educated Iraqis. “The U.S. defeated Saddam’s armies in a matter of weeks,” they would say to me, incredulously, “so how is it that you can’t defeat a ragtag army of jihadists in two years?” Their conclusion was that there must be some secret agenda.

Iraq has been a difficult place for U.S. public diplomacy for a very long time now, and yet one would think that a war that the U.S. is fighting on behalf of and in collaboration with the Iraqi government and numerous other international partners, a war that is truly an existential one for Iraqi Shia, would produce at least some dividends in terms of Iraqi goodwill toward the United States. And yet, most Iraqis see Iran and Russia as better security partners.

The temptation is to blame Iraqi mistrust of America on propaganda spread through social media by groups and individuals aligned with Iran and hardline Shia groups such as the Ahl Assaib al-Haq (AAH) and Nujabaa. These groups and the predecessor militias from which they emerged have long opposed any U.S. presence in Iraq, and fought the U.S. military a decade ago. Today, they are on the front lines of fighting Da’esh under the umbrella of the Popular Mobilization Forces. They certainly do not want to share any credit for victories in the anti-Da’esh fight with the United States. Nor does their patron, Iran. They have deployed no shortage of disinformation, which includes such gems as stories, photos, and video of the United States allegedly airdropping supplies to Da’esh fighters.

Such propaganda has an effect, and counter-messaging is important. The State Department and U.S. military need to keep up the counter-messaging campaign, not only emphasizing the U.S. role and assistance, but also at times directly addressing and refuting the disinformation put out on social media. Public diplomacy practitioners can also seek out more Iraqi allied messengers, such as the Shia clerical establishment and top politicians, to assist in counter-messaging.

But this disinformation campaign works not only because it is well crafted, but also because the audience is receptive. The widespread belief in conspiracy theories that allege U.S. support for Da’esh is only the symptom of a deeper disease. And relying on messaging alone is simply like slapping a band-aid on a festering wound. This disease is a deep gulf of mistrust between the United States and Iraqis, especially Iraqi Shia. The origins of mistrust go back decades, from tacit U.S. support for Saddam Hussein in the 1980s, to a failure to support southern Shia in their 1991 uprising (despite encouraging the uprising in the first place), the devastating 1990s sanctions championed by the United States, the failure to stabilize the country after 2003, and consistent U.S. support for a political class in Baghdad that is seen as deeply corrupt. And so the following paradox: even though the U.S. invasion of 2003 effectively empowered the Shia for the first time in Iraqi history, and despite billions of dollars in U.S. assistance to Iraq since 2003, many Shia continue to deeply distrust U.S. motives in Iraq.

The notion that the U.S. secretly supports the terror group as a way to divide Iraq persists.

They simply do not see the U.S. as a credible, consistent and committed partner, and logically turn to Iran. Herein also lie the limits of counter-messaging: so long as the messenger lacks credibility, the message will not be trusted, and certainly will not “stick.” This was one of the lessons learned in the State Department’s messaging initiative to counter violent extremism on the internet.

Overcoming the decades of mistrust will entail a longer, determined campaign that draws on the full range of public diplomacy tools. Consistent engagement, and building people-to-people ties through exchanges are obvious solution, though such programs have been cut back in recent years as funding for Iraq dried up after the 2011 military withdrawal. More Shia from the south need to be included in exchange programs. U.S. diplomats must get out of their fortified compounds, especially in areas of Iraq where the security threat is lower. This is a tall order in the post-Benghazi climate at the State Department, but if the U.S. wants a relationship with Iraq that reaches beyond military involvement and counterterrorism, it is necessary. Finding ways to extend the tours of U.S. diplomats in Iraq beyond one year would also help a great deal in building relationships.

Part II of a two-part series looking at American public diplomacy in Iraq. The first part can be viewed here. Previously I brought up reforms that would aid trust-building in Iraq, such as extending U.S. diplomats' tours...