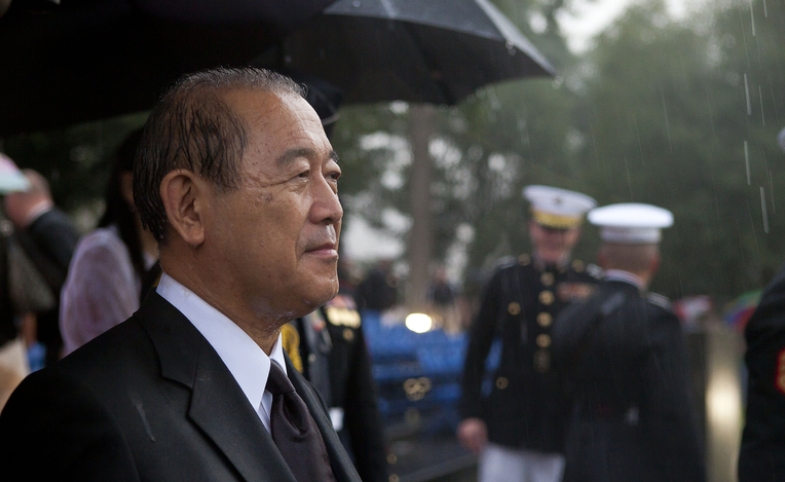 WASHINGTON – Ichiro Fujisaki, Japan’s ambassador to the United States, spoke mainly about public diplomacy in one of his final appearances as ambassador here Thursday afternoon.

The ambassador, who steps down next month, began by thanking the American people for their assistance during Japan’s nuclear accident last year. Many countries helped, he said, but “at the top of the list were Americans. Japanese people do not forget.”

One reason, according to the ambassador, is the level of English language instruction in his country. To remedy that, he said his government had begun sending “hundreds” of Japan’s English language instructors to the U.S. It isn’t a large percentage of teachers, the ambassador conceded, but over a career each teacher will teach five thousand students, so the cumulative impact should be great – resulting in more students coming to America.

“We have to send more to the U.S.,” said Fujisaki.

The ambassador said one of his proudest achievements in just over four years as ambassador was celebrating the centennial of Japan’s gift of cherry blossoms to the U.S., a gift he compared to France’s gift of the Statue of Liberty. But unlike the statue, he noted, cherry blossoms can spread throughout the country.

“This year we have cherry blossoms to 36 [American] cities,” said Fujisaki. “This is a really important symbol of U.S.-Japan relations.”

The ambassador, in his remarks at the Brookings Institution, also said he has been asked frequently whether his country supports President Obama or Governor Romney in next month’s election, to which he tries to give what he called “the diplomat’s answer:”

“It should be like a Christmas present,” he said. When you open it up, you say, ‘This is exactly what I wanted.’”

However, the ambassador could not resist adding a p.s.

“But you do not have a receipt to take it back to exchange.”