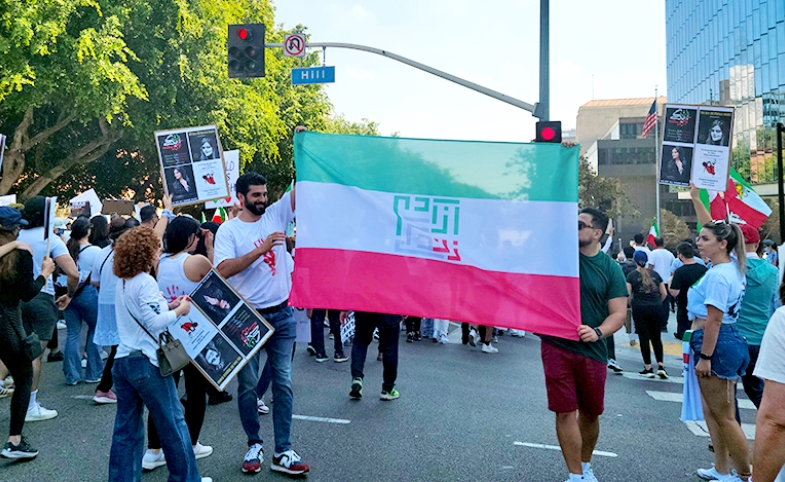 “Zan, Zendegi, Azadi!” This chant echoes today throughout Iran, but the concerns are shared across borders and therefore call for cross-border solidarity: protesting everything that is undermining "Woman, Life, Liberty."

This time, politics and politicians may not be key diplomatic players: “real people” are. Like-minded people find each other, united behind a cause based on mutual understanding, respect and collaboration. The official entity that can strengthen such exchanges is the city. On September 30 and October 1, 2022 Los Angeles City Hall became the convening space for over 20,000 people across cultures to come together in solidarity with the Iranians who are demanding respect for individual liberty. The rallies were part of a global movement in over 150 cities worldwide to show support for the Iranian people, especially women, girls and youth in Iran.

The unifying slogan roughly translates to “Woman, Life, Liberty” and applies to any movement that attempts to dismantle inequalities, systemic sexism and misogyny. This is true from what Kurds in northern Syria promote through jineology to what activists of the 1960s and 70s Women Liberation Movement were fighting for in the United States and what people are fighting for in Iran today. This movement is borderless and illustrates the strengths of citizen diplomacy.

On September 11, 1956, U.S. President Dwight D. Eisenhower held a White House Conference on citizen diplomacy, which was the capstone of the People-To-People program to “build a road to an enduring peace.” In his speech that day, Eisenhower stressed that if we assume people want peace, “then the problem is connecting them together.” Today—nearly seven decades later—it is crucial for Angelenos and Tehranians who want enduring peace to build the much-needed bridges and connect. Local governments are poised to facilitate such connections. As he said, “Two deeply held convictions unite us in common purpose. First, is our belief in effective and responsive local government as a principal bulwark of freedom. Second, is our faith in the great promise of people-to-people and sister city affiliations in helping build the solid structure of world peace."

It is little known that Los Angeles and Tehran are the only U.S. and Iranian cities that have ever been official sister cities. Although the official ties between the two governments are now in disrepair, the experience at Los Angeles City Hall provides a promising vision. It helps people understand how Los Angeles can better connect local social justice activists with their international counterparts and to do so in ways previously unfathomable at a time when the media can more boldly cover the story of a historical feminist movement in Iran.

This is especially true when the emergence of participatory technologies that facilitate listening, dialogue and other aspects of mutuality are more accessible. Connectivity is replacing hierarchical and one-way dissemination of the U.S. government’s perspective as though the Iranian audiences are passive consumers.

This time, to reverse years of one-way messaging from the West, a Middle Eastern nation can demonstrate feminism to a Western audience. A truly two-way communication can take place to strengthen feminism through bringing cross-cultural perspectives. This can help Western liberal feminism avoid a possible crisis by becoming divisive and mostly exclusive to middle-class ‘woke’ participants. While feminist movements in the U.S. have been inspirational to activists in Iran for years, today, the Iranian feminist movement, as Slavoj Žižek explains, not only includes men but shows how this movement is not for one gender or against another. People across genders, religions, ethnicities and all social classes are standing together, understanding that when women don’t have their fundamental human rights, the whole country doesn’t have them either.

But who can make this connection between feminists in Iran and the United States? People who have the same commitment to a cause for social justice. This is citizen diplomacy reimagined to match today’s realities. As my research has found, cities and local governments can facilitate cross-national engagement between citizens to promote “peace through mutual respect, understanding and cooperation—one individual, one community at a time.” But if this attempt appears “too slow,” knowing that it is the “truest way to peace,” perhaps instead of cutting ties or dismissing programs such as Sister Cities, outreach programs can be re-imagined to fit the realities of today’s technology and hyper-connectivity. This sisterhood will be between the people of two cities, and government may intervene only to facilitate.

The time seems right to connect human rights activists in Iran with their comrades abroad. Iranian human rights lawyer Nasrin Sotoudeh, who is one such activists, has written a letter to her fellow women’s rights activists in the U.S. In which she says, “I stand by you, my sisters, so that through our solidarity as women, we triumph over oppression and make the world safer and better for generations to come.”

Based on my interviews with selected city officials, it seems city-to-city programs can evolve to stimulate more transparent, reliable, and internationally protected avenues of dialogue. Regardless of the policies of the nation-states or even city officials, citizens must be allowed and encouraged to interact. Second, while foreign policy is determined at the national level, input from subnational actors, such as city governments and the citizens they represent, should systematically contribute to policymaking.

Ultimately, given the inability at the national level to listen to the other side and the current structure of national diplomacy, there is an opportunity for cities to provide a more inclusive platform upon which the residents of the city in question, who are in contact with counterparts abroad, can inform policies. The recent appointment of Ambassador Nina Hachigian, former Los Angeles Deputy Mayor for International Affairs as the first U.S. Special Representative for Subnational Diplomacy at the U.S. Department of State, is a concrete step toward harnessing the power of local governments in enhancing national foreign policymaking and diplomacy.

Currently, there may be an absence of two-way state-level engagement with the Iranian people in Iran. However, the gap can be addressed based on mutual respect, dialogue, collaboration and aid facilitated by cities that involve their citizenry and enable citizen diplomacy on social issues that are borderless.