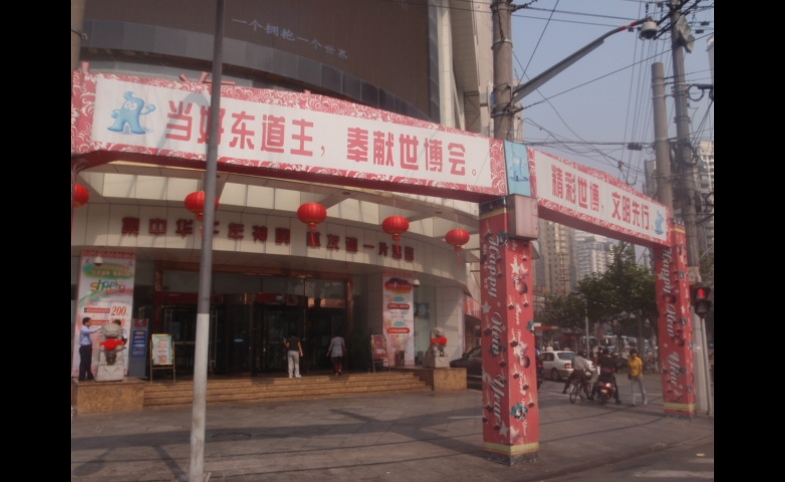 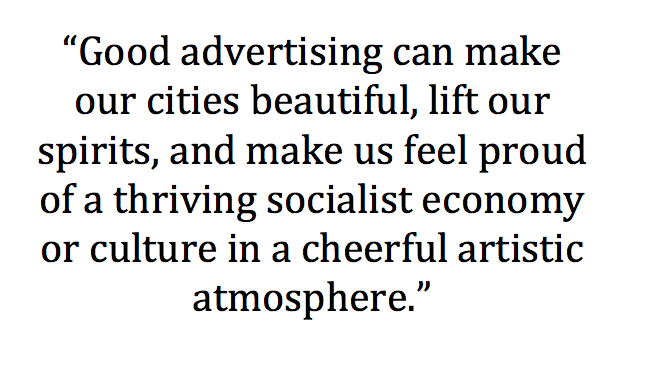 Internationally, the 2010 Shanghai World Expo was a major tourism and branding draw card for its host city. Domestically, the Expo constituted a major source of national pride and a key vehicle for the promotion of official messages reinforcing traditional state propaganda themes. Like the Beijing Olympics two years prior, the Shanghai World Expo was an opportunity for the state to cross-brand its messages with the fervor and prestige surrounding a world-class event.

This essay’s seven photographs explore the domestic cross-branding of the World Expo with traditional propaganda messaging as it appeared in advertising posters/billboards throughout downtown Shanghai during the Expo. Although not all constitute direct political advertising, they all nevertheless perform a definite ideological role in reinforcing key propaganda themes.

The public relations machinery of the Chinese state has emerged as a formidable force in the production of messages in what some have referred to as a post-communist era. As these photographs suggest, this is due largely to an adaptation of Chinese Communist Party signs and symbols to the new advertising industry and media of the reform era and, importantly, to their increasingly decentralized and commercialized production.

These photographs provide for a vivid insight into the domestic state public relations dimensions of what was otherwise a major international public diplomacy event. 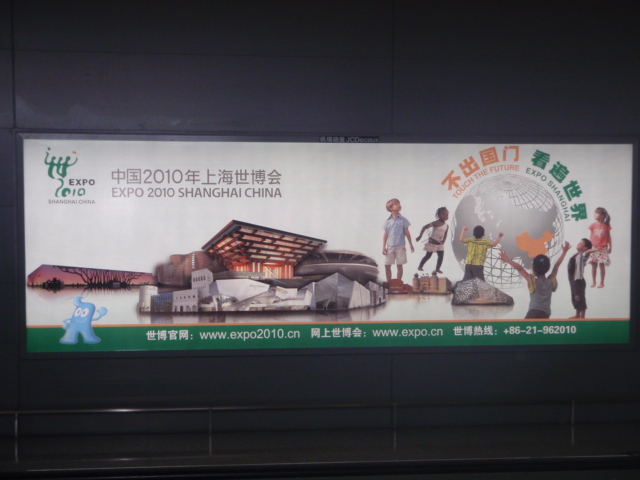 90% of visitors to the Shanghai Expo were from within China itself, and Shanghai stood to benefit spectacularly as a domestic tourism destination. The event posed an opportunity for Shanghai to showcase itself to the world and to enhance its domestic brand as China’s cutting edge world city.

In accordance with the Expo motto, “better city, better life,” Shanghai presented itself as a model city of the future. Accordingly, domestic tourists “were exposed to a crash course in civilised behaviour, thanks to a Shanghai government campaign to eradicate habits such as spitting, queue barging, and smoking in public.” [2] 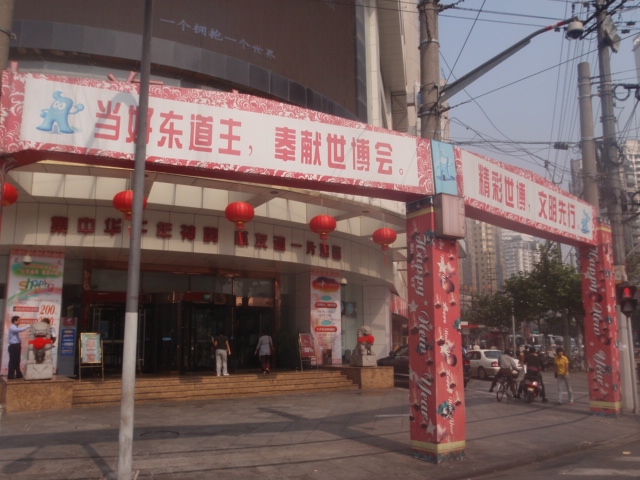 For the duration of the World Expo - and in its lead-up - Shanghai’s public domains were either renovated or decorated to promote the Expo and reflect its themes. Beautification efforts ranged from shop owners and residential committees doing their bit to erect banners and spruce up their surrounds, to the upgrading of parklands and commuter arteries.

Shanghai reportedly spent USD 45 billion on the Expo and associated urban improvements. Despite such efforts, there were the inevitable reports of “whispers that buildings on the main roads, which expo visitors will use… have been spruced up and painted but only on the street front. At the sides and at the back, they are said to be as shabby as ever.” [3] 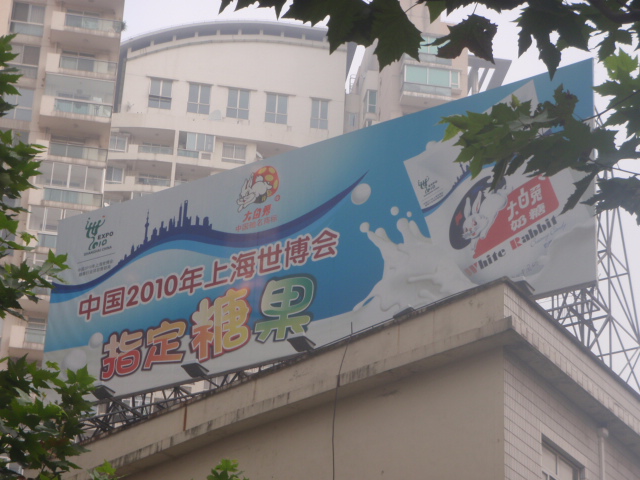 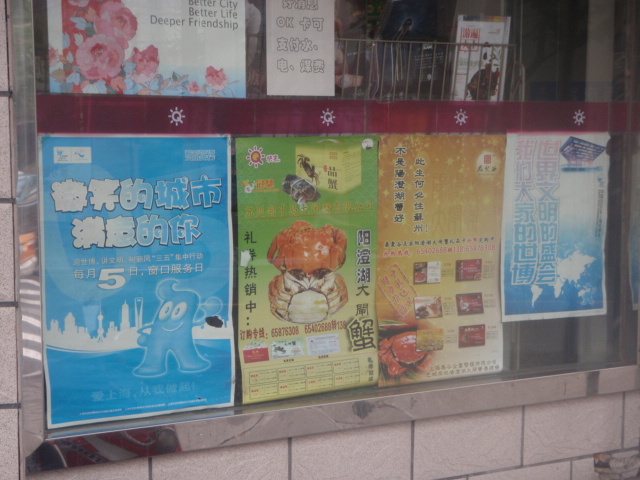 A number of commentators have argued that Chinese state propaganda posters have proven ineffective in being heard among the cacophony of advertising messages crowding contemporary China’s streetscapes. Here, Expo posters advertising official thematics of civility and good customer service mix it with commercial advertising on a convenience store window.

The poster on the bottom left advertises district government-organized “customer service day,” held on the 5th of each month in the lead-up to and during the Expo. Such messaging replicated initiatives staged in Beijing in the lead-up to the 2008 Olympics. From 11 April 2007, for example, the 11th of each month in Beijing became “queuing promotion day.” 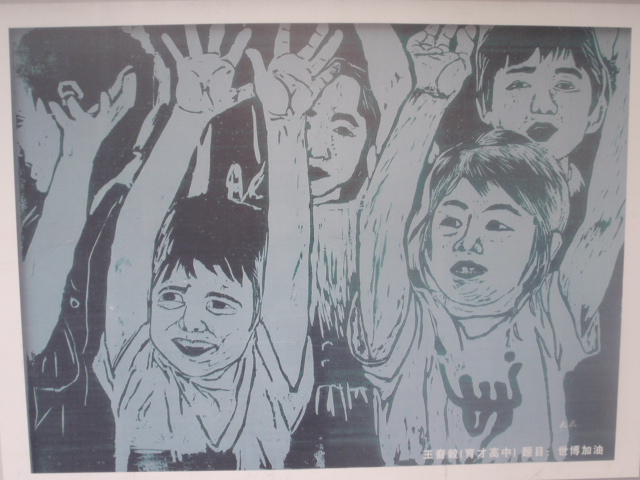 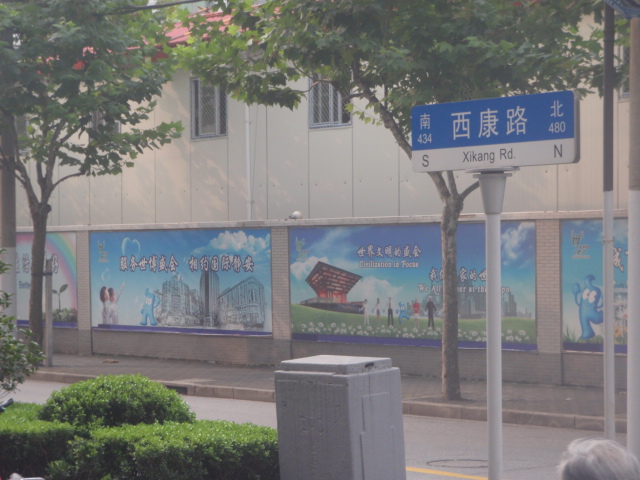 Anne-Marie Brady notes that Olympic propaganda was the main theme of public bulletin boards and other forms of local propaganda in the two years leading up to the Games. [5] As with many practices, this was replicated in Shanghai. During preparations for the Expo, official messaging increasingly combined references to civilization and the Expo, with people urged to “Welcome the Expo, stress civilization and cultivate a new style” (ying shibo jiang wenming shu xinfeng). 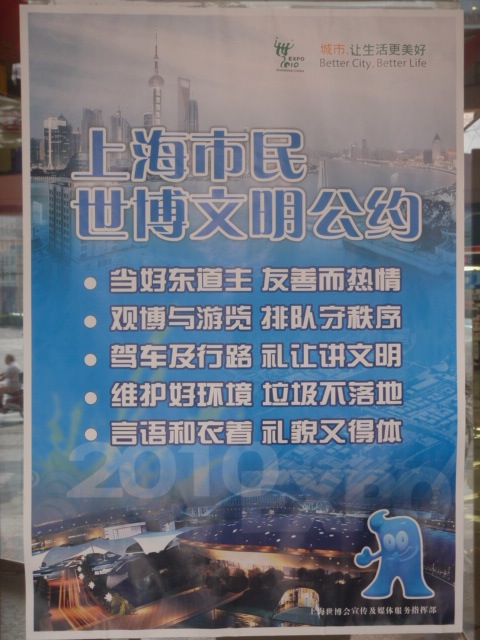 An article published in Shanghai’s World Expo Magazine states “Common residents do not stand under the same spotlight as diplomats or Expo representatives; however, they help to enhance the image of Shanghai with their daily practices.” Such measures as the promulgation of the World Expo Civilization Compact aimed to put encourage citizen behaviors that promoted a civilized image of Shanghai as World Expo host city.

The compact, which was otherwise a carbon copy of existing resident compacts, employed Expo language to stipulate well-worn moral, political and patriotic tenets, such as playing good hosts, obeying road rules, being civilized, not littering, protecting the environment, using polite language and queuing.

All photographs are from the collection of the Line 21 Project (www.line21project.org).

Brady, Ann-Marie (2009) “The Beijing Olympics as a Campaign of Mass Distraction”, The China Quarterly.

A Tale of Two Pavilions

In anticipation of CPD’s upcoming public diplomacy forum in Japan, we’ve opened our World Expo vault for an inside look at how Japan crafted its brand identity for global audiences. The World Exposition is a mega global...