Home|The Perils and Potential of Visa Diplomacy: The Importance of Waiting Times (Part 2) 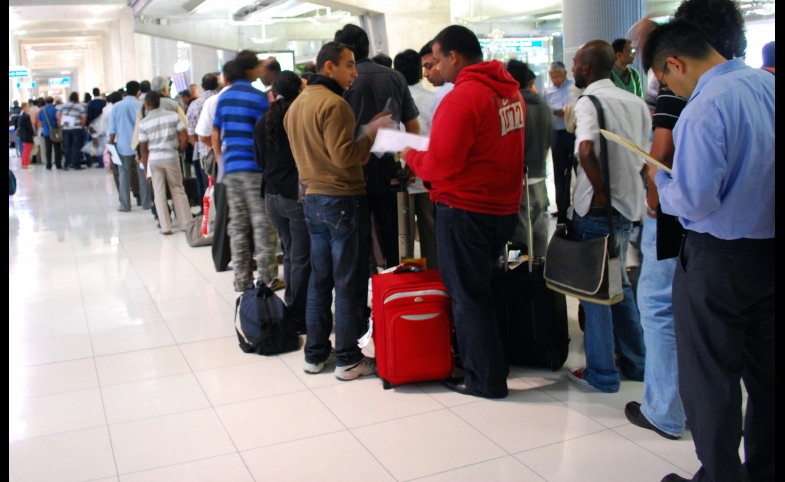 The Perils and Potential of Visa Diplomacy: The Importance of Waiting Times (Part 2)

NOTE: This blog is part two of a multi-part series. Part one can be found here.

In January 2012, amid concerns that the U.S. was failing to capitalize on global tourism growth, President Obama issued an executive order aimed at improving U.S. visa processing in Brazil and China. In relation to China, this meant requiring the Secretaries of State and Homeland Security to create a plan within 60 days to increase nonimmigrant (NIV) visa processing capacity in China by 40% within 12 months, and “to ensure that 80 percent of nonimmigrant visa applicants are interviewed within 3 weeks of receipt of application.”

The following month, the then-U.S. Ambassador to China, Gary Locke, claimed that 50 new consular officers would be dispatched to China and a consular facility in Beijing reopened that would increase interviewing capacity by 50%.  Almost three years on, available evidence from the International Trade Administration suggests that U.S. visa offices in China are meeting President Obama’s targets.

Likewise, Canada has launched the CAN+ Visa programme, which enables those who have travelled to either Canada or the U.S. in the last ten years to get a Canadian visa within five days of submitting the application. Launched in India, China, and Mexico on a pilot basis, CAN+ Visa is now a permanent feature in all three countries.

These high-level U.S. and Canadian initiatives have purposefully targeted the massive BRICS tourism market, in which both increasingly mobile source country middle classes and destination country tourism industries have been demanding the reduction of visa red tape. It’s about ensuring that visa regimes are keeping up with emerging markets and the rapidly changing risk profiles that they represent.

The simplification and removal of processes for frequent travelers—who present relatively low risk—is a smart way to reduce waiting times and unnecessary processing effort. Smart visa processing involves differentiating risk within a visa caseload so that low-risk applications are dealt with quickly and with little effort, mid-risk applications receive middle-of-the-road treatment, and high-risk applications are subject to more integrity checking. This segmenting of the visa caseload can be driven at the macro-level, as we saw with Obama’s January 2012 dictum, but it can also find expression in the local processes of the visa section of a particular consulate or embassy.

A good example of the latter is an arrangement that Australian visa posts in China established some years back with Tourism Australia. In this cooperative arrangement, pre-vetted low-risk tourist visa applicants received visa outcomes within 48 hours. A similar process existed for business visitors endorsed by the Australian Chamber of Commerce in China. This was an arrangement unique to a particular location where on-the-ground knowledge of local market dynamics was harnessed in the national interest to streamline visa processes for low risk  (and high-spending) tourists.

Unlike their political and military affairs colleagues who tend to operate and engage within limited elite circles, the visa officer’s clientele is no less than the host country’s entire traveling public.

The problem with a lack of direction at the macro level, however, is that the conception of a progressive local arrangement is sporadic, its existence precarious, and its effectiveness limited by the overarching administrative frameworks in which it sits. Despite accommodating local arrangements such as the above, Australia’s tourist visa regime has come under attack for failing to keep up with the market and for lowering the country’s destination competitiveness. An Australian Prime-ministerial delegation to China, for example, recently fielded criticism over the fact that Chinese tourists must apply for visas in English and in paper rather than online.

But BRICS, particularly China, have become a priority policy focus for destination states in recent years, and it is towards such countries that governments are more likely—like Obama in 2012—to see the need for doing things like reducing visa wait times. But what about the other markets out there that remain outside the warm glow of the policy spotlight?

Ultimately, it is in the vacuum of a clear government or agency-level strategy where it comes down to the head visa officer in an embassy or consulate—where they have the latitude to do so—to initiate local solutions. Although they may be the chief “gate-keeper” of their country in a particular location, these diplomats, whether they like it or not, perform a critical public diplomacy role. Unlike their political and military affairs colleagues who tend to operate and engage within limited elite circles, the visa officer’s clientele is no less than the host country’s entire traveling public. Within this context, there can be no denying either the positive word-of-mouth power of enlightened visa processing or the negative reputational consequences posed by the lack of it.

People who have a need or desire to travel and have the means to do so generally understand the requirement for visas. What they don’t necessarily understand is why a simple tourist visa should take more than a couple of days to process. Cutting red tape for lower-risk travelers—whatever nationality they hold—can pay massive social and economic dividends for a destination country by generating both goodwill and tourism revenue.

All over the world, a growing number of cities are deploying significant resources in order to stand out as places to visit, do business and invest. Annual international rankings of the world’s most attractive cities, such...

The Perils and Potential of Visa Diplomacy: An Immigration Practitioner’s Perspective (Part 1)

NOTE: This blog is part one of a multi-part series. The literature on the relationship between public diplomacy and visas is as polarized as the effects that a nation’s visa policy can have on its image. Visa...

Can a tourist truly live like a local? The app, Like a Local, celebrates tourism diplomacy by offering users a guide to traveling the world by connecting them to cafes, restaurants, shops, museums and other activities off...