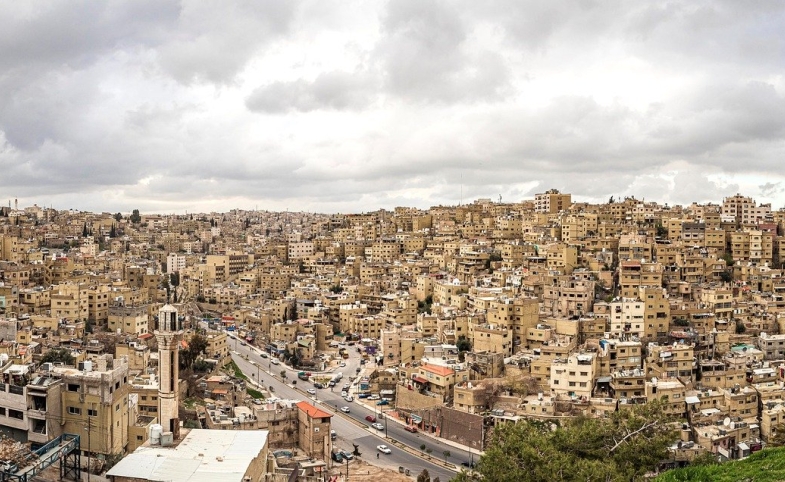 Note from the CPD Blog Manager: This post is second in a series exploring new American film and TV diplomacy via U.S. Foreign Service Officers (FSOs) in the field who are producing virtual diplomacy programs during the COVID-19 pandemic. Read the first post here from Rachel Gandin Mark, Director of International Programs at the USC School of Cinematic Arts, where she oversees two U.S. State Department grant programs.

On March 13, the U.S. Embassy sponsored the screening of an American Film Showcase (AFS) documentary, RBG (Ruth Bader Ginsberg), at the UN Women’s annual Women’s Film Week at the popular Rainbow Theatre in downtown Amman. We did not realize then that this would be the last public-facing cultural program we would offer before Jordan went into one of the strictest government-enforced lockdowns in the world just a couple of days later due to the pandemic.

We were gearing up for our largest film diplomacy endeavor of the year, in support of the inaugural Amman International Film Festival (AIFF), scheduled for April 13-18. In addition to an AFS Envoy who would lead a three-day Negotiation Workshop and open discussion on Best Practices in Entertainment Law during the festival industry days, we also gave a grant to Film Independent to execute a TV Showrunners Workshop and offered two prestigious residency awards for exchanges to LA for Jordanian screenwriters.

We did not want to stop the momentum of our film diplomacy programming, as it expands economic opportunities for Jordan’s young people—a top embassy priority—and elevates new voices using film and TV to tell important stories.

Although AIFF is now rescheduled for late August, it is unclear when we will really be able to support the in-person exchanges that normally provide the bedrock of our cultural diplomacy programs. We did not want to stop the momentum of our film diplomacy programming, as it expands economic opportunities for Jordan’s young people—a top embassy priority—and elevates new voices using film and TV to tell important stories.

Energy was high, especially after a very successful recent Lighting and Grip Workshop led by a gaffer and grip from Hollywood, both AFS Envoys. Thus, we reached out to our well-established and long-term partner, the Royal Film Commission (RFC), which since its establishment in 2003 has played a trailblazing role in the development of Jordan’s film industry. Working quickly, we crafted a new collaborative agreement to sponsor a series of capacity-building workshops over the coming year with American expertise. To launch the series, we partnered with AFS who provided a stellar Envoy to lead a virtual writing-for-TV workshop May 17-21.

In a first for the RFC and the embassy, we gathered 14 Jordanian creatives via Zoom to learn from Jill Goldsmith’s impressive experience as a writer for Emmy-winning series including NYPD Blue, The Practice, Ally McBeal, Law & Order and Boston Legal. Participants included alumni of prior embassy film programs, a prominent social media consultant, the founder of a large Arabic entertainment network on YouTube, and a lead content creator for Jordan’s premier private TV network. In addition to the intimate workshop, Ms. Goldsmith was also featured in an open discussion about character development as part of the RFC’s ongoing weekly masterclass online discussions. While we hope the remaining workshops in the series can be conducted in-person with American Envoys traveling to Jordan, the virtual launch successfully proved useful trainings can be delivered in an online environment, if necessary.

Also in partnership with AFS, we offered an online screening of Chef Flynn, part of the AFS slate of documentary films, as part of the RFC’s “Cur-film Initiative.” The first non-Arab film in the series of bi-weekly free virtual screenings, this inspirational story about a 15-year-old American chef provided the first public-facing—albeit virtual—cultural activity offered by the embassy during the pandemic. The personalized introduction video with Arabic subtitles from the film’s producer and director, Cameron Yates, congratulating Jordanians on the conclusion of Ramadan and the Eid al-Fitr celebration, went a long way generating interest in the event, highlighting the importance of food in bringing people together, even during times of social distancing.

While we look forward to resuming our in-person support of the Jordanian film industry and the AIFF, we are thankful to have maintained programming in this field that tackles an important mission goal of furthering job opportunities in the private sector to help maintain social and economic stability in Jordan.

Ahead of the 88th annual Academy Awards show this Sunday, CPD is opening our own film diplomacy vault for a look back at the role of Hollywood, film and filmmakers in shaping global public opinion. Here are some highlights,...

I went to a movie on Thanksgiving, and by the time I left the theater I realized I had seen the best American public diplomacy message in years. The movie was The Martian, and it had everything we should be promoting:...