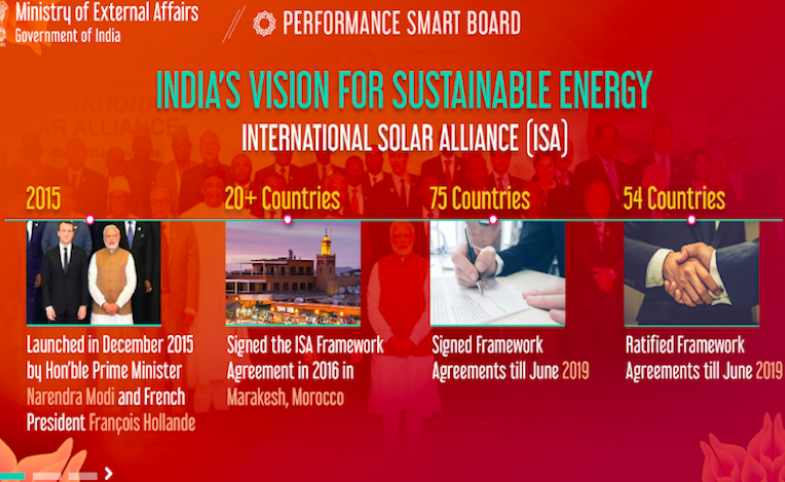 More than at any other time, digital diplomacy activities have seen an upward trend under Indian Prime Minister Narendra Modi. Recently, the Ministry of External Affairs (MEA) launched a Performance Dashboard with the aim to provide information to the public while improving transparency and accountability in governance. While the move is fixated on the salience of informing the public about foreign affairs, it is simultaneously aimed at engaging the public through nodes of good governance.

Fundamentally, the dashboard is promising on two fronts. Underlying the label of transparent governance and empowering people, it being projected by the government, there appear to be unfolding two facets of targeting public opinion—firstly, actuation of public diplomacy through the digital medium and, secondly, reinforcement of growing assertiveness of foreign affairs in the domestic politics of the country. While both essentially reflect the two inter-connected aspects of strategic political communication, the latter is a notable trend that seems to be emerging significantly at the interface of foreign policy and domestic electoral politics of India.

Significance of the Dashboard for Domestic Public Diplomacy

The dashboard is a means of information dissemination. It aims to put performance indicators of the MEA at the disposal of the people in a smart and uncluttered manner. Providing easy access to information about a variety of activities, interactions and policies in the arena of India’s foreign affairs to the public is grounded in the reality that information dissemination is at the core of public diplomacy. It is the prerequisite for interaction because real dialogue must be based on topic familiarity, shared understandings and common interests.

The dashboard is designed to improve the context of engagement with the public. Informing the public is perhaps the first step towards appearing credible in making the way for dialogue and engagement, especially at the domestic level with actors such as NGOs and civil society entities. Building credibility is important precisely for the reason that the diluted trust among citizens in the government’s activities remains to be a major hurdle for public diplomacy in India. More importantly, issues like corruption have damaged the credibility of the country and diminished its ability to conduct public diplomacy.

Moreover, dissemination of information related to foreign affairs is crucial for public diplomacy outreach, especially for creating a strong foundation for collaborative public diplomacy. This is where India falls short of its potential despite having a robust civil society that in many ways is filling in the gaps that the government cannot due to a shortage of manpower.

It is all the more important in a democracy where continuity and stability of foreign policy and governance rely abundantly on favorable public opinion and popular support in shaping domestic legitimacy for the successful execution of public diplomacy abroad.

The recently concluded general election is a case in point for the growing assertiveness of foreign policy in the domestic electoral politics of India. Foreign policy came into the limelight like never before during the election. It demonstrated that foreign and security policies can become factors crucially relevant and significant in domestic electoral politics. For instance, India’s growing bonhomie with Israel, markedly a tectonic shift in diplomatic relations, has received huge public support. There is now domestic consensus in India that strong ties with Israel are essential for Indian national security interests.

"...the creation of the dashboard on the MEA’s website is indeed as much prompted by the realities of the competitive diplomatic landscape in conducting international relations as for sustaining the momentum of foreign and security policies that contribute to electoral success."

Nevertheless, the improved relations with Israel appeared to have resonated well with the projection of India’s rise as a global player under the leadership of the PM Modi. While this might have per se remained a less significant vote-getter, it certainly seemed to have contributed to the making of the image of a rising India—this enhanced the status of Modi as a world leader, further feeding into his popularity in domestic electoral politics.

Thus this example showcases the fact that projecting achievements in the realm of foreign and security policies can generate favorable public opinion domestically and thereby gain electoral dividends. This was a departure from earlier trends, which suggested that foreign and national security policies would not play a considerable role in India’s electoral outcomes.

Seemingly foreign policy has been brought forth into the election arena, to a great extent through narratives, photo-ops and rhetoric. Extensive promotion of India’s foreign affairs, including both bilateral and multilateral engagements through social media, has been effortlessly fused with Modi’s speeches and election campaigns punctuated with remarks of a rising India. 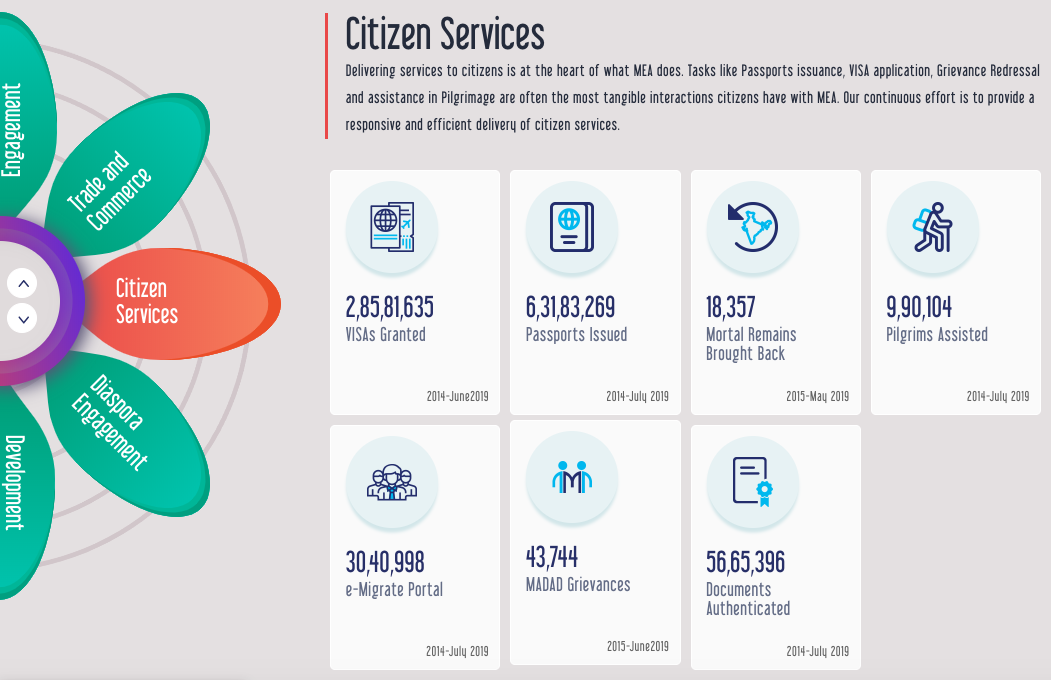 PM Modi has kicked off his second tenure with high public expectations and a palpable sense of anticipation about the trajectory of Indian foreign policy (PDF)—the major challenge before the government is to put foreign affairs on a positive footing.

In such a context, providing data to support positive developments under this government can potentially enhance the credibility of such success claims and maintain the status quo in order to leverage potential electoral gains.

Thus, strategically, the creation of the dashboard on the MEA’s website is indeed as much prompted by the realities of the competitive diplomatic landscape in conducting international relations as for sustaining the momentum of foreign and security policies that contribute to electoral success. Functionally, in the daily flood of information and disinformation online, projecting a country’s achievements can be a difficult task to accomplish. Public attention needs to be dragged to the kinds of information a country wants to project. To this end, in this particular case a single platform that provides both service-related information and highlights positive developments taking place under the aegis of the MEA can be promising both in terms of domestic public diplomacy efforts as well as in maintaining a continuity in the growing assertion of foreign affairs in the domestic electoral politics of India.

Muhsin Puthan Purayil
CPD Blog Contributor
Ph.D. Candidate, Department of Political Science, University of Hyderabad
YOU MIGHT BE INTERESTED IN...