“Min hem ya neem,” bellowed the baritone Kurdish Hamlet. To be or not to be—always a good question to be asked of any public diplomacy venture.

Recently, American Voices held its annual Youth Excellence on Stage (YES) Academy in the city of Duhok, in the Kurdistan region of Iraq. American Voices, the nonprofit for which I am the Director of Communications, conducts cultural engagement and diplomacy in countries emerging from conflict or isolation. At American Voices, we believe that cultural diplomacy requires sustained engagement and as such this year marked our sixth summer performing arts academy program in Iraq.

With support from the U.S. Embassy in Baghdad and the Kurdistan Regional Government, the YES Academy Iraq program brought together over 300 Iraqi youth from across the country to study music, theater and dance for two weeks. With the still-precarious security situation in Iraq, the program offered students from across Iraq an opportunity to meet, and ultimately jam, with their compatriots. Meanwhile, it fostered people-to-people diplomacy as the students bonded with and learned from their American teachers. It felt like nothing short of a public diplomacy miracle to hold together a quadralingual program—Arabic, two dialects of Kurdish (Badini and Sorani) and English— for two weeks.

And since nature abhors a vacuum, somehow I ended up playing Assistant Director for this veritable Iraqi band camp. While I don’t play any instruments, I became a musical wiz at banging pots and pans through the dorm halls to wake up oversleeping participants. Thankfully, the only hard power I had to exercise came from kicking in a few bathroom doors when locks got stuck (I was greeted as a liberator).

The YES Academy program does not teach beginning musicians how to play but, rather, works with aspiring musicians to teach them to play and teach at a more professional level. As part of the program, we brought a dozen faculty to Iraq, including professors from schools such as Baylor University, University of Missouri and East Carolina University. Throughout the day and late into the night, the YES Academy faculty labored away teaching these budding musicians and thespians new ways to perform their craft.

The program ran the entire spectrum of the performing arts. There were classes for classical symphony and the YES Academy Orchestra learned everything from Vivaldi’s Concerto Gross to a stirring rendition of Coldplay’s Clocks.

The YES Academy Iraq had a new and innovative program this year on music composition—likely the first time such a class has ever been taught in Iraq. Led by Dr. Patrick Clark of the University of Missouri, the music composition class taught neophyte composers theories of western musical composition and how to apply it to Kurdish and Arabic music. The outcome was stunning as the students wrote six full compositions including a piece that melded Western classical music with Kurdish folk melodies. (one of the compositions, "Xalef u Shixani") Another favorite was “The Baghdad Waltz,” which whimsically tied triple-metered waltz music to the essence of the Iraqi capital.

The jazz & rock classes taught the history of those uniquely American art forms and some fascinating variations on them. For the final gala, the jazz class performed a Latin Jazz favorite by the legend Tito Puente, among other jazz tunes.

Often for the performing arts academies, we have to work with a scarcity of instruments. This was most apparent in the piano program, which was forced to share one piano among a dozen students. Yet, under the tutelage of Dr. Bradley Bolen of Baylor University, these piano virtuosos rose to the occasion and, by the end, they were masterfully playing works by Chopin and Rachmaninoff. Meanwhile, the piano shortage led to some precarious moment when we had to hoist the sole piano up and down flights of stairs for the gala performance. I never imagined that public diplomacy included avoiding a hernia.

The Adult Theater program offered lessons in staging, script-writing, improvisation, miming as well as training for teachers of children’s theater. Also, as indicated by the opening stanza to this blog, there was an engaging extrapolation of excerpts from Shakespeare’s classic, Hamlet. It was riveting to watch that eternal question uttered in Arabic, Badini, Sorani and English by a score of princes of Denmark. Meanwhile, the Children’s Theater program taught aspiring thespians aged 6 to 12 fables from around the world and helped them to stage Kurdish folk tales.

Perhaps the most exciting portion of the program was found in the hip-hop & breakdance class. The highly athletic and energetic ADS Crew—Baghdad’s only breakdance crew— worked with breakdancers from Kurdistan to hone their breakdance talents. YES Academy dance faculty instructor Michael Parks Masterson pushed these nimble artists to learn new levels of choreography and staging so that their raw talent could be transformed into new levels of breakdance savoir faire. 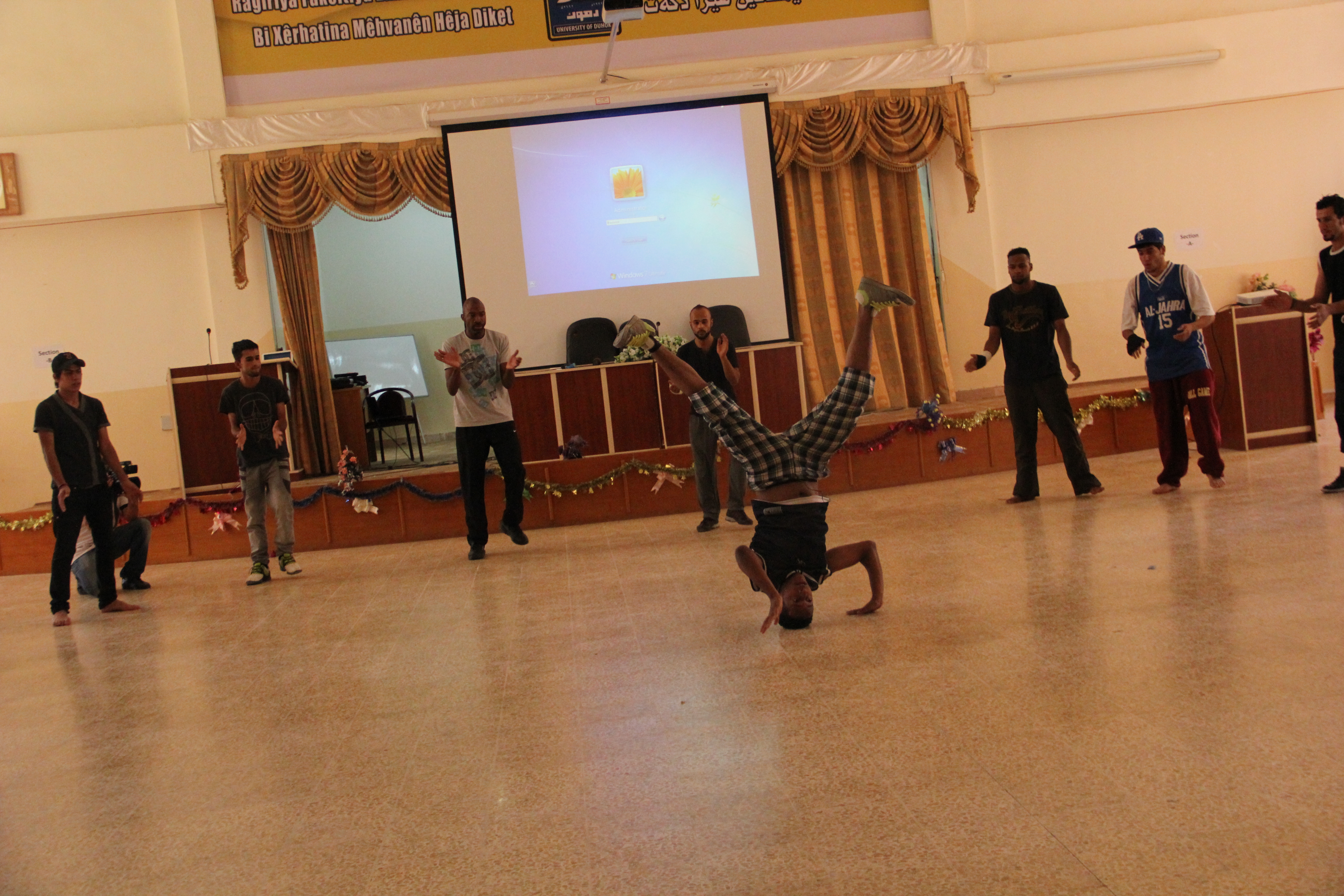 I also learned a lot at the YES Academy Iraq, especially about the practical application of public diplomacy. Far removed from theories of public diplomacy, sometimes the most essential acts of public diplomacy are the banal nitty-gritty aspects that are ultimately so important. Things like ensuring that an army of students remains fed; that students are awake and attending class; that there are enough translators in a class who are able to translate the right dialect of Kurdish so the students can understand the professor’s lesson. Sometimes I felt like I was a public diplomacy camp counselor.

Yet, working with such immensely talented youth, it was hard not to be inspired. In the end, we concluded with a two-day gala concert showcasing all that had been learned; it was then apparent that the program had been a great success.

As a post-script on the YES Academy Iraq, after the 12-day Duhok program, the faculty split up to run mini-YES Academies in Kirkuk and Baghdad. I helped run the 4-day Kirkuk program, which was held at the Kurdistan Save the Children’s Fund office and included classes on children’s theater, woodwinds, and jazz, piano and string orchestra.

Kirkuk is a fiercely divided city these days, and given its precariousness, we had to commute from Erbil- the capital of the Kurdistan region of Iraq. To make this hour commute, we went in an armored convoy with Kalashnikov-sporting Asayesh (Kurdistan Regional Government Security Forces). As if something out of a spy novel, we rode down the desert highway with guns a-blazin. We had to switch routes on a daily basis and often changed cars while entering and exiting the city. When in Kirkuk, I got yelled at a few times by security for moseying outside the building to take pictures— with good reason, a week later an al-Qaeda car bomb went off on the block as Iraq convulsed with its worst spate of violence of the year. Thankfully, no one we were working with was hurt, and just some windows were shattered—but a terrifying reminder of the realities of conducting cultural diplomacy in countries emerging from conflict.

It is hard to describe the feelings that accompany such a program as the YES Academy Iraq. It was an exhausting endeavor, yet one that felt so utterly meaningful and fulfilling on so many levels. It was amazing to watch the progress of the students over the intense two weeks. And I learned so much from the community of students and faculty that only such people-to-people engagement can foster. It is ultimately programs like the YES Academy Iraq that do the most to cover that hallowed ground that is the last three feet.

Danish free speech advocacy group Freemuse has released its annual report, “Art Under Threat,” documenting the state of global artistic freedom in 2016. The report showed a sharp rise in attacks and censorship, with 1,028...

The Ethics of Visiting North Korea

In the wake of the U.S. travel ban to North Korea which took effect on September 1, the Condé Nast Travelogue podcast looks at the morality behind visiting the country. The hosts grapple with the idea of tourism to the...