Home|Are Mexico and the U.S. in Wonderland?

Are Mexico and the U.S. in Wonderland?

Between January 29 and May 6, 2012, posters of Frida Kahlo’s self-portrait were hung from light posts around Los Angeles. The portraits served as invitations to “In Wonderland: the Surrealist Adventures of Women Artists in Mexico and the United States,” the first co-organized exhibition by the Los Angeles County Museum of Art and Mexico’s Museum of Modern Art. 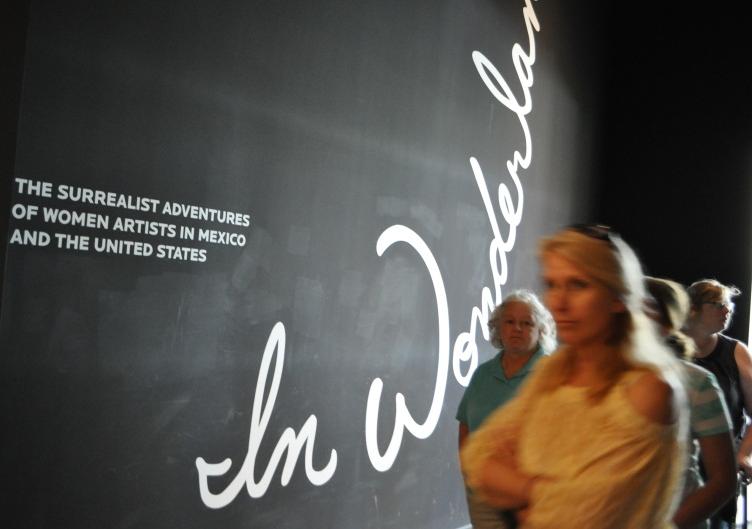 However, the exhibition can be considered an alternative narrative to the U.S.-Mexico relationship, that is the idea of North America as a hub of talented artists whose work spans across borders, and more significantly, as partners of artistic vanguards nurtured by a creative network that extends throughout the major cities in the region, or to use what the exhibition’s title evokes: “Wonderland.”

Even though the exhibition frequently references North America, it is focused on Mexico and the U.S. because the works of the artists displayed at the exhibit traveled between the two countries. This already meaningful exhibition that is linking the U.S. and Mexico through this creative network becomes more so when considering the context of U.S.-Mexico relations, which unlike the U.S. and Canada, is marked by heightened contrasts.

Besides the long and tumultuous border that marks their territorial contiguity, Mexico and the U.S. distance themselves due to their asymmetrical economies, a different set of cultural values, and thorny events inscribed in their relative short history as independent states. Furthermore, the perceptions they maintain of each other are almost the subject of a thesis-antithesis rationale: corruption-rule of law, underdeveloped-developed, order-instability or even confidence-lack of self-esteem, to mention a few. Thus, this compound of differences has spawned numerous prejudices and stereotypes which have severely undermined mutual understanding between Mexicans and Americans. Although it is a pattern commonly observed in neighboring countries with cultural differences and economic disparities, the differences between the U.S. and Mexico has generated a relation characterized by a well-discussed mistrustfulness.

Confronted with such contrasts, “In Wonderland” comes to play a sort of reconciling role by portraying the buoyant artistic creativity of Mexican, American, and European émigrés who developed surrealism between the 1920’s and the 1960’s. In fact, what the exhibition subtly unveils is the notion of North America as a land of emancipation, where incomers, in this case women, free from devastating wars and social hierarchies, could look for a new start. Certainly, this notion constructed from emancipation aspirations is not completely new if we consider each country’s backgrounds. It is generally accepted that the U.S.’ self-definition is a nation of immigrants pursuing the “American dream.” Mexico in turn, regards itself as a hospitable nation; a country that opens its doors to refugees from different latitudes: Lebanese citizens fleeing from the convulsive Ottoman disintegration, Spaniards or Chileans’ exiles from dictatorships, and many other emigrants. Each country, despite having restrictions on immigration inflows, has a long standing tradition of receiving émigrés.

Additionally, we can trace attempts to tie together not only the two nations, but the entire American continent, under the same idea. The Western Hemisphere idea, as Arthur Whitaker puts it, is founded on the basis that the peoples of the Americas cherish values that set them apart from European social constraints. However, what “In Wonderland” seems to have achieved is to combine the shared experiences of women with similar backgrounds and identities, guided by the same artistic influence, which was at the same time revolutionary and liberating, exclusively under North America.

No less interesting is the common subject that brings both countries together: surrealism. As art historian Whitney Chadwick affirms in the exhibition’s catalog, Mexico and the U.S played a central role in the surrealists’ narrative because of the lasting impact of surrealism in both countries and the relative large number of women who were associated to it. Through this female surrealists’ network, knitted by friendship and familiar relations on both sides of the border, their works were diffused through Galleries in Mexico City, San Francisco, New York, Los Angeles, Chicago and, International Expositions, as well as through art journals and magazines. Additionally, their works were nurtured by artistic residences, as those that took place in Erongarícuaro, Michoacán.

Susan Fort and Tere Arcq, the curators of “In Wonderland,” esteem that surrealism enabled women in Mexico and the U.S. to construct new identities that demonstrated their independence and imagination. In this sense, even though female surrealists’ inspiration to reinvent or emancipate themselves may be more associated to their will to transcend paternalistic views, childhood traumas, male-centered standards or social class, than to the influence of North America as a land of the free, it is worth highlighting how “In Wonderland” binds together Mexico and the U.S. by emphasizing the shared experiences between American, Mexican and European female émigrés both as women and artists. This element could pave the way for reinvented narratives between the already very complex and fascinating relationship between the U.S. and Mexico.

After premiering at LACMA, “In Wonderland” will travel to the Musée National des Beaux-Arts du Québec (MNBAQ), from June 7 to September 3 2012. Finally, it will end its journey with the Museo de Arte Moderno in Mexico City, from September 27, 2012 to January 13, 2013.

Oscar Castellanos del Collado is a Public Diplomacy student at the University of Southern California. He majored in International Relations at Universidad Iberoamericana in Mexico City and also studied at Sciences Po Lyon in France. He has previously worked as a Research Assistant in Cultural Diplomacy. He is concentrating his career in migration, civil society, and photography.