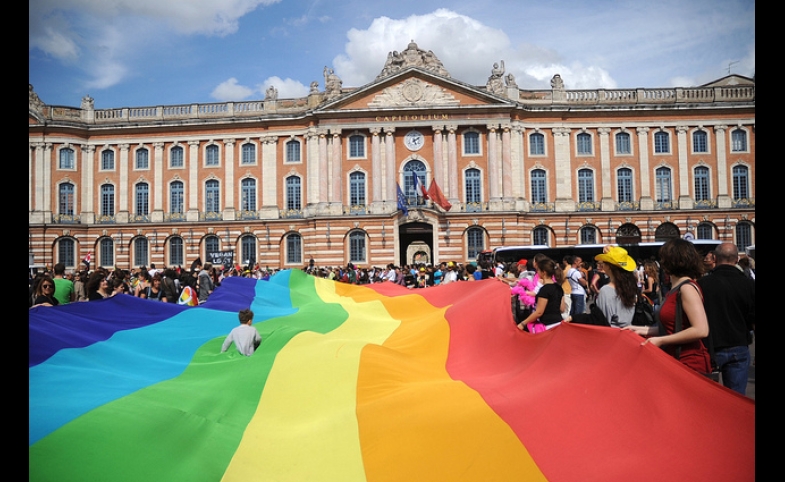 In our international surveys at the Pew Research Center, we explore how people in countries around the world differ on a wide range of political, economic, and social topics. But very few issues generate the kind of differences we see when we ask about homosexuality.

A 2013 Pew Research survey asked people in 40 countries whether they believe homosexuality is morally acceptable, morally unacceptable, or not a moral issue. Across the nations polled, a median of 59% said homosexuality is unacceptable. Larger percentages considered extramarital affairs and gambling unacceptable. Meanwhile, fewer respondents said this about abortion, premarital sex, alcohol use, divorce, or contraception. 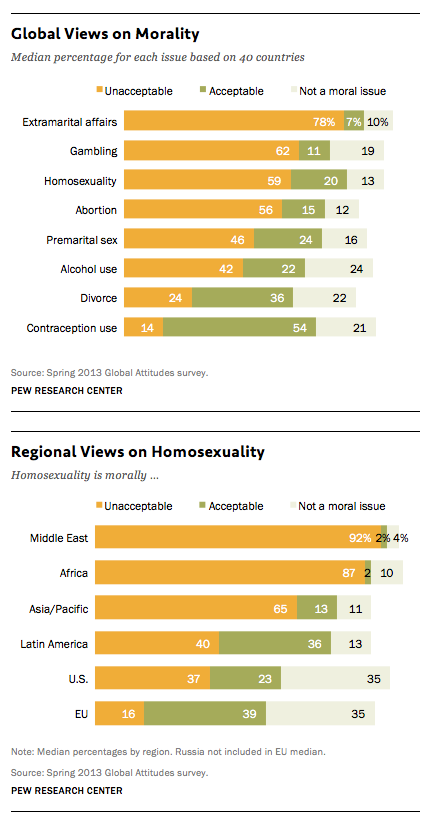 Overall, the most negative views about homosexuality were found in the Middle East, with nine-in-ten or more Jordanians, Egyptians, Palestinians, and Tunisians saying it is unacceptable. Israelis are the clear outliers in the region (43% say unacceptable).

Attitudes are also overwhelmingly negative in sub-Saharan Africa. Solid majorities in all six African nations polled deemed homosexuality unacceptable, including a nearly unanimous 98% in Ghana, and 93% in Uganda, whose president signed an extremely severe law against homosexual behavior in February, although the law was subsequently struck down by a court on technical grounds.

Across the nations polled, a median of 59% said homosexuality is unacceptable. Larger percentages considered extramarital affairs and gambling unacceptable.

A median of 65% across the Asian nations in the survey said homosexuality should not be accepted, although views vary considerably across the region. Large majorities in the predominantly Muslim nations of Indonesia (93%), Malaysia (88%), and Pakistan (85%) believe homosexuality is morally unacceptable, as do somewhat smaller majorities in India (67%), the Philippines (65%), China (61%), and South Korea (57%). However, just 31% of Japanese and 18% of Australians hold this view.

There are also wide differences across Latin America. Salvadorans express the most intolerant attitudes (70% unacceptable), while about half feel this way in Bolivia (51%) and Venezuela (49%). Mexicans (40%), Brazilians (39%), Chileans (32%) and Argentines (27%) are less likely to believe homosexuality is unacceptable.

Europeans express the least negative views on this issue. In none of the eight European Union countries surveyed does a majority say homosexuality is morally unacceptable, although more than four-in-ten do hold this view in Greece and Poland. At 8% and 6% respectively, Germany and Spain are the only countries where fewer than one-in-ten consider homosexuality unacceptable.

In the U.S. and many other nations, young people are much less likely than their older counterparts to describe homosexuality as morally unacceptable.

Meanwhile, 37% of Americans believe it is unacceptable, a relatively high number among advanced economies. However, American attitudes have grown more tolerant in recent years. For instance, in 2001 only 35% supported same-sex marriage, compared with 52% in 2014.

In the U.S. and many other nations, young people are much less likely than their older counterparts to describe homosexuality as morally unacceptable. While 46% of Americans ages 50 and older say it is unacceptable, just 28% of 18-29 year-olds say the same. The most striking age gap is found in South Korea, where 79% of people 50 and older believe homosexuality should not be accepted, compared with only 28% of those under 30.

There is also a strong relationship between a country’s level of religiosity and views on this issue, with negative opinions much more common in countries where religion plays a central role in people’s lives. The share of the public saying homosexuality is morally unacceptable tends to be particularly high in nations where large numbers say religion is very important to them, pray at least once a day, and think it is necessary to believe in God to be moral. Meanwhile, acceptance of homosexuality is more common in countries with low levels of personal religiosity, such as the relatively secular nations of Western Europe.

The fundamental impact of globalization, societal changes and digital technology is reshaping the role and practice of soft power in international affairs. What are the new and future trends, and how will we experiment with...

Public Opinion in the Digital Era

Does the world trust government, media and big tech? On October 24, CPD and the Embassy of Sweden in Washington, D.C. co-hosted Public Diplomacy for the Digital Future, a forum that explored multi-...