Yet again we are confronted with a dilemma: when is culture an instrument of soft power? We talk about cultural diplomacy, cultural exchanges and even cultural influence. What is less discussed is how cultural paraphernalia connect to, integrate with, and ultimately enhance a nation’s soft power capital.

“I Sing Beijing” is a programme that has been widely celebrated as yet another ingredient in China’s ever-expanding soft power strategy. It is the idea of Tian Haojiang, an opera singer who emigrated from China to the U.S. more than 20 years ago. The premise is that by learning to sing Chinese opera, ‘westerners’ will understand Chinese culture and therefore China much more. 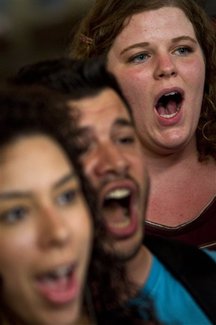 Opera singers sing in Mandarin during a visit to a factory in Beijing, China

The Chinese have a long tradition of public diplomacy and soft power, and both history and culture have remained at the heart of its global outreach. Foreign visitors have always been ‘surrounded by all the glories of Chinese civilization and the refinements of its culture’ in the belief that such exposure might yield tangible results. Moreover, the west has long appropriated Chinese culture for its own satisfaction. During the 17th and 18th centuries Chinoiserie, a fascination with all things Chinese, was extremely fashionable throughout Europe, though since such appropriation was not motivated by Chinese interests, its role in China’s strategic communications was limited. Chinoiserie was an adornment, a sign of privilege and wealth in Europe, not an indicator of China’s power or western interest in, let alone sympathy for China. In the twentieth and twenty-first centuries, China’s cultural diplomacy has expanded to include first giving and now renting pandas to zoos around the world, exhibitions of Xian’s famous terracotta warriors in the world’s museums, and the performance of traditional Chinese martial arts for global audiences. China’s films, too, have captured international attention, but only among audiences who dare to venture into art house cinemas and are not afraid to watch films with subtitles.

My questions with such cultural diplomacy are: What comes next? What is the next step? If you accept that you are undertaking ‘cultural diplomacy’, what are you actually trying to achieve and how do you know when you have achieved it?

The principal problem with trying to analyze cultural diplomacy as a facilitator of soft power is that it is extremely difficult to measure impact. First, culture is very subjective. What appeals to one may not appeal to others, especially when cultural products are being exported around the world for viewing by audiences who may have no or very little cultural understanding of what they are seeing. This means that targeting requires special attention, and may even necessitate audience segmentation and a level of education.

Second, there are no guarantees that cultural interest will translate into tangible soft power results. It is useful here to refer to research on Japan’s JET programme of cultural and educational exchange which demonstrates there is no assured correlation between participation in such a programme and sympathy/empathy for Japan. Participation may increase knowledge about the host country and its people, but may have little or no effect on sympathy or empathy.

Similarly, cultural attraction does not necessarily translate into soft power or foreign policy. China is understandably very critical of Japan because of their traumatic shared history, yet Chinese remain major consumers of Japanese pop culture products. Again research on the JET alumni has suggested that they were anxious to separate their love of Japanese culture and people from their views about the Japanese state; they were simultaneously critical of Japan while embracing some of its cultural products.

The same criticisms can be made about the Confucius Institutes which are experiencing serious problems (credibility, finance, uptake) outside Asia. Moreover, whenever a story emerges about internet control, the imprisonment of Nobel Laureates or world famous artists, or bungled attempts to prevent investigations of high-speed rail crashes, the cultural diplomacy suffers a serious set-back. Claims that Yao Ming is China’s biggest soft power asset are likewise questionable: Has he made the American public more interested in or sympathetic to China? Or is he just a very good Chinese basketball player? Unless we can demonstrate that there is a clear correlation between Yao Ming and a softening in American public opinion towards China, can we really conclude that he exercised soft power?

Which brings me back to “I Sing Beijing”, a noble endeavour that may expand interest in Chinese opera and thus preserve an important cultural phenomenon. But I hesitate to claim that this programme adds to China’s cultural capital, and the most important reason for this hesitancy is that all the singers have received a full scholarship partly funded by the Hanban, the government agency responsible for the Confucius Institutes. One reason why the Confucius Institutes have been less successful than they otherwise might have been is the direct involvement of the Hanban (and this is why it is inappropriate to claim their parity with the British Council, the Alliance Française or the Goethe Institutes). Perhaps “I Sing Beijing” might have more soft power credibility and ultimately success if it was completely financed by private interests and had experienced no government interference whatsoever. Just a thought ….

Gary D. Rawnsley
CPD Blog Contributor
Professor of Public Diplomacy at Aberystwyth University
YOU MIGHT BE INTERESTED IN...