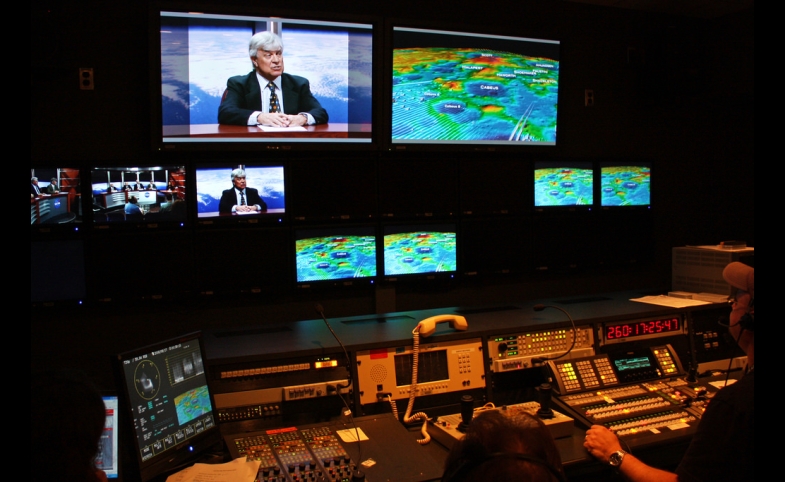 Instead of Global News, National Cacophony

Recently, Brazil impeached its president, Colombia arrived at a peaceful agreement (but failed referendum) to a decades-long civil war, and the Middle East became more volatile after Turkey unilaterally invaded Syria. The list goes on.

The network news on that eventful day, however, was dominated by two extreme East Coast weather events, a photo-op in Mexico, and a few viral YouTube videos.

CBS Evening News’ Walter Cronkite was once considered America’s “most trusted” person. Summarizing the day’s most important events in 22 allotted minutes, he ended his news broadcasts by saying “that’s the way it is.” A chunk of that news was always international, in part due to the Vietnam War.

Now, even with America still in its longest war in its history in Afghanistan, the nightly news programs are nearly free of international news and opinion.

The national conversation they once conducted and led is dead.

Instead, there is a national cacophony. The reasons are many, and include the fragmentation of media, opinion-reinforcing news and social media sites, personal time pressures and increased political polarization. As a result, the formerly estimable nightly news programs reflect an aging viewership and have become platforms for incontinence and impotence drug advertisers.

This is not a lament for what is lost or a naive paean to a golden age of broadcasting, but it is a recognition that there is a lot going on in the world—significant, important things—and citizens will not be made aware of them through their contemporary news diet of often fake Facebook and Twitter feeds.

What America is being “fed” is ephemeral, brief and local. Nuance and the world be damned. The new media are not structured to serve context or global perspective. Instead, Americans today are left to their own handheld devices, often seeking gossip, animal videos and extreme opinion.

All this despite Americans’ expressed interest in international, contextualized news. The U.S. reality is citizens generally consume less foreign affairs news, even as economies and wars rapidly globalize.

When Americans were subject to military conscription, what happened in the world had direct and potentially personal consequences. That direct connection between what happens elsewhere and what happens back home has been broken. And the consequences of growing global ignorance is unknowable.

Globalization, however, is more relevant than ever. But the news ecosystem that informs and shapes opinion today is more tribally and locally focused.

Network news media abandoned overseas bureaus and correspondents, and little of substance filled the vacuum. In fact, some of the few institutions that have filled the gap are not American, but rather Chinese, Russian and Qatari.

Russia and Wikileaks' meddling in this election confounded facts and may have even tipped the election. The traditional, reliable staple of America’s news diet was neither fast enough nor reliable enough to create credible counter-narratives.

It is a challenging environment where the answers are complex and costly. Disturbingly, network news and a national civil conversation—even fundamental factual reporting—are currently not popularly perceived as necessary for the fluid functioning of democratic government and society. Unfortunately, that is the way it is.

Note from the CPD Blog Manager: This post originally appeared in the Sacramento Bee.