The Lasting Images of Mubarak’s Regime

The age of the image is upon us and the clock cannot be turned back. And yet the Mubarak regime is in denial. It started with muffling the voice of al-Jazeera. I was fortunate to be in Cairo during the first two days of the current uprising. On January 25 and 26, when the roads around me were starting to be blocked, when sirens and loud speakers could be heard in the areas surrounding Tahrir Square, and when both the police and protesters were mobilizing in larger numbers than ever before, I was struck by the inattention that al-Jazeera was giving the protest. The channel’s schedule of programs continued as normal—there was no live coverage from the protest location in Tahrir Square, and no interviews with any activists. It was later said that this was due to pressure put on al-Jazeera by the Egyptian government that was trying to impose a media blackout. Egyptian state TV ignored the protest as expected, and mobile phone lines were down by Tuesday afternoon. 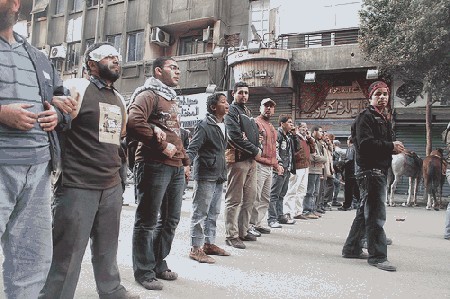 The social media were my saviors at the time. Twitter, Facebook, Youtube and a myriad of other sites provided me with the instant news, photos, and videos that television wasn’t broadcasting, as well as providing activists with logistical information about organizing the protest. The Egyptian government’s decision to shut down not just those sites (which is what eventually happened on January 25) but, eventually, the whole internet as well, in addition to phone lines, was driven by both paranoia and delusion. If the shutdown was supposed to stop protesters from organizing themselves, this was proven wrong as two million protesters showed up in Tahrir Square on the day all those communication tools were dead, on January 28. And if the shutdown was supposed to prevent the news from reaching the world, January 28 was the day when al-Jazeera changed tactics and wholeheartedly embraced the protests in its coverage, despite interferences with its satellite signal. The morale of the story is that stopping the flow of images today is like attempting to fend off seeping water. Images always have a way of breaking their way in, or out.

Now the internet is functioning again in Egypt and the government has resorted to intimidating and attacking both local and foreign journalists in yet another desperate attempt at averting the gaze of the world. This is a sign of how far the Egyptian regime is from the reality that it simply cannot turn back the clock. The tipping point was Wednesday’s clashes between the protesters and “pro-Mubarak” thugs. Images of the clashes have formed a permanent imprint on the minds of those who have seen them, whether first-hand, on al-Jazeera, Youtube, a video shared on a mobile phone, or elsewhere. For it is not how you receive an image that matters, it is what the image itself says. The footage of an official security car deliberately running over protesters speaks volumes about the regime’s stance towards its people. While images of whip-carrying thugs charging on camels and horses prove that when it comes to instilling fear, the creativity of authoritarian regimes knows no bounds.

Three decades of Mubarak’s rule have now been reduced to those images. Just like the image of the young man defying a tank in Tiananmen Square in 1989 has defined one of those iconic moments capturing a wider historical narrative, so do the images that have so far poured out of Egypt. No matter how much the regime tries to promote its own version of events using state television and other media or how much it tries to prevent the rest of the world from witnessing what will come, it is too late: the images that the regime will be remembered by have already been cemented, and the story has already been told.

Successful public diplomacy is based on providing foreign publics what they need, be it information, a vaccination program, or help in securing economic well-being. A good example of working toward the latter can be found...