BEIJING. On the first day of our trip, the MPD student delegation to China visited Peking University (PKU). We met with Professors Wang Dong and Yu Wanli as well as students of international relations to discuss the U.S.-China Bi-National Commission Report on Mutual Trust and their perspectives on Chinese public diplomacy.

My first impression of PKU was that it has a very beautiful campus. A sense of history and pride surrounds the university, one of the oldest and most prestigious schools in China. Modern and traditional Chinese architecture stand side by side, harmoniously representing the dawn of a new age for China but reflecting its ancient past. PKU students quickly greeted us and ushered us into a newly built glass building where the meeting was held.

It was a breath of fresh air to hear Chinese academics speak of their perspective on Chinese diplomacy. I really appreciated their honesty and willingness to be transparent with us, recognizing that there are pros and cons to their system, just as in other systems around the world. One of the students shared that one of the key findings for him in public diplomacy is the need for PD to be conducted with confidence, because it is presenting to the world the identity of one’s culture. One must first be aware of who they are, so that the work that is presented to the world is based on a firm foundation and stands to be recognized.

When asked what the crucial elements for good public diplomacy are, Professor Wang said that what really matters is what one does when one is not doing PD. In other words, what happens behind the scenes in policymaking is what really delivers credible PD. In essence, public diplomacy is like having good credit: it must be constantly maintained so that a nation’s soft power remains at high levels when it is really needed. 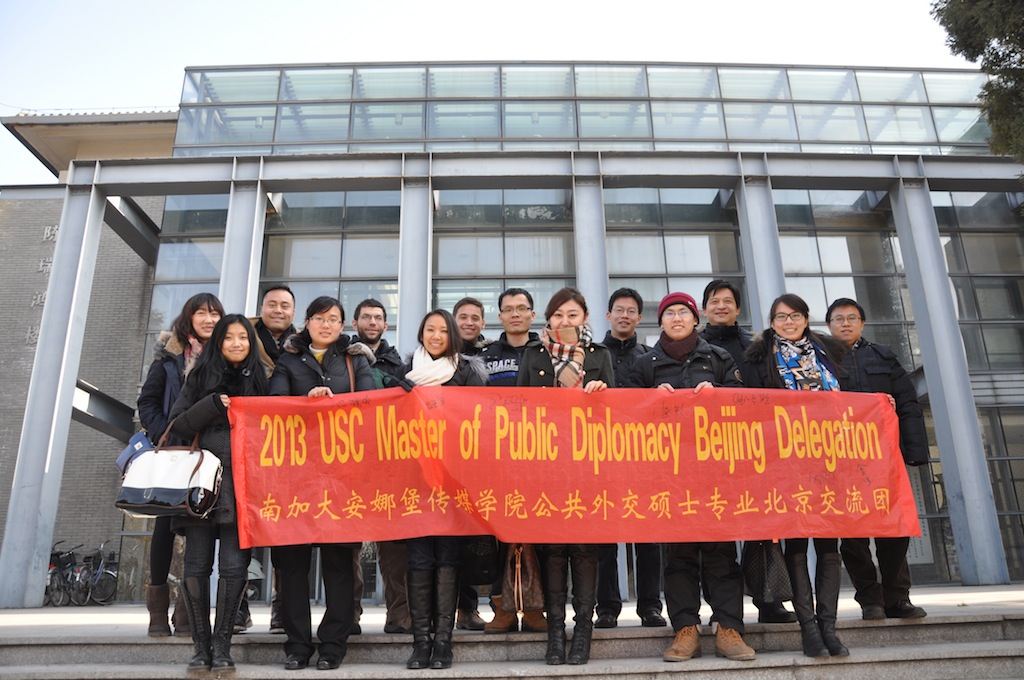 I found I was particularly challenged by the views expressed by one Chinese student, who said that he hoped that he could one day let the world know that China is a great country, and it is not a “police country,” a perspective contrary to my preexisting views on the goals of “peaceful rise” typically associated with Chinese PD. Although the art of listening has been taught to us as one of the key elements of good public diplomacy at USC, it is not always an easy thing to practice. Yet I found the conversation to be an opportunity to practice personal public diplomacy, to attempt to understand the Chinese student’s perspective, whether or not I agreed with his opinion.

This truly set the tone for the rest of our trip. As the group left PKU, we felt a strong sense that there would be much more to come and that already we would return to the U.S. with a deeper understanding of Chinese public diplomacy.

Frank Cheng is a graduate student pursuing a Master's degree in Public Diplomacy from USC's Annenberg School for Communication & Journalism.