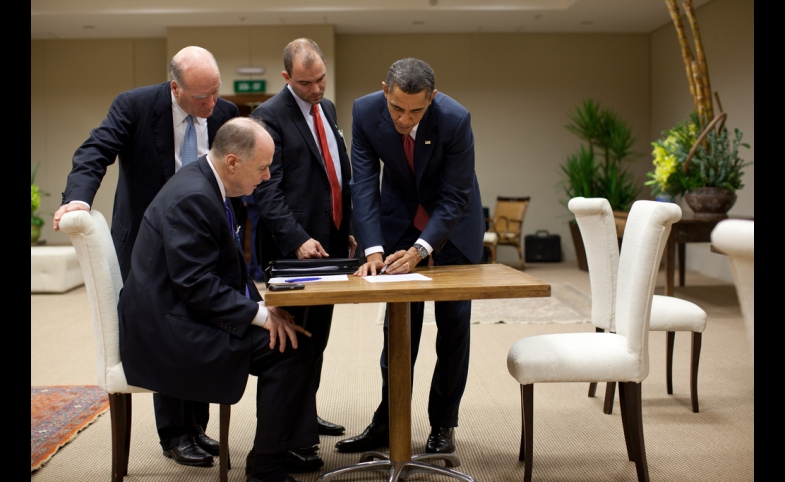 On May 5, The New York Times Magazine published a profile of Ben Rhodes, President Obama’s deputy national security adviser for strategic communications. Such an article might have attracted little interest but Rhodes’s condescending remarks have made him the focus of much negative attention.

His comments not only call into question the honesty of policy statements from the White House, but they also display a fundamental disregard for the news media’s role in informing the public about what its government is doing. Performing that role requires that the relationship between press and government, although characterized by dynamic tension, be built on a foundation of mutual respect.

Rhodes told the article’s author, David Samuels, that journalists who cover international affairs from Washington "literally know nothing" and are part of a foreign policy establishment he dismisses as an irrelevant "Blob."

Samuels reports that Rhodes has "a healthy contempt" for the Blob and its members – including Hillary Clinton and former Defense Secretary Robert Gates – who "whine incessantly."

Rhodes is portrayed in the profile as the master of reducing issues to tweets and having few scruples about twisting public opinion in ways that advance the White House’s political agenda. Other administrations have similarly embraced "messaging," but few have had a high-ranking staff member be so foolish as to brag publicly about his skill as a manipulator.

Even more unsettling in this article is the total absence of evidence that Rhodes understands the purposes or history of American foreign policy. Rhodes, who is 38, left university wanting to become a novelist. The 9/11 attacks led him to venture into international affairs, and his writing skill carried him through a series of Washington jobs that took him to the White House.

He comes across in the Samuels article as a slick salesman, someone who would be just as comfortable spinning the attributes of a used car as he is in convincing the public to follow the White House lead on global affairs.

This article, along with Jeffrey Goldberg’s recent essay "The Obama Doctrine" in The Atlantic, point to a fundamental shallowness in the Obama administration’s worldview. These reports are in line with cautionary words from Gates, who in his 2014 memoir, Duty, noted his concerns about the Obama national security staff, writing that they had no "firsthand knowledge of real-world governing" and "lack an awareness of the world they had just entered," Rhodes is part of this; well-meaning, perhaps, but not possessing the knowledge someone in his position should have.

Although Rhodes’s claim that journalists "know nothing" is wrong as well as insulting, they could know more. American news media have significant problems in their coverage of the world. As journalism’s traditional economic model disintegrates under pressure from new media formats, international coverage has been significantly reduced, with some news organizations closing all their foreign bureaus. We are still seeing the rise of specialized internet-based reporting – the likes of Global Post and Foreign Policy magazine’s array of online products – but the general public has yet to gravitate toward such providers. Further complicating this situation is that many universities’ journalism programs emphasize form over substance, concentrating on gimmickry – virtual reality, anyone? – rather than substantive understanding of the subjects their graduates may be asked to cover. This means that the next generation of correspondents might be even more susceptible to the tactics of future White House politicos.

[Rhodes] comes across in the Samuels article as a slick salesman, someone who would be just as comfortable spinning the attributes of a used car as he is in convincing the public to follow the White House lead on global affairs.

Rhodes and his White House colleagues have disproportionate influence over US foreign policy because of significant shifts of authority away from State, Defence, and other cabinet departments, with the White House enjoying mission creep.

The National Security Council (NSC) was created in 1947 to bring together top-level foreign policy advisers and provide greater coherence to foreign policy planning. Its director, the national security adviser, has sometimes wielded considerable power, visibly, by Henry Kissinger during the Nixon administration, for example, and less visibly but more effectively by Brent Scowcroft during the George HW Bush presidency.

The NSC staff has grown enormously. During Scowcroft’s tenure, it comprised 50 people. It has doubled with each successive presidency: 100 during Bill Clinton’s tenure; 200 under George W Bush; and during the Obama presidency it has reached 400 (and it is most definitely not eight times more efficient that it was during Scowcroft’s time).

Senator John McCain has introduced legislation to cap the NSC staff at 150, but managing the White House is not the business of Congress. Obama and his aides have opened themselves to such pressure by allowing the NSC to become so bloated, although the current national security adviser, Susan Rice, has promised substantial shrinkage by the time Obama’s term ends.

Size isn’t the only problem. Even within the administration’s ranks there have been complaints from cabinet departments about being "big-footed" by the White House on everything from making sub-cabinet appointments to developing policy within their areas of responsibility. The 2015 U.S. opening to Cuba, for example, was handled at its outset entirely by the White House staff – with Rhodes running the negotiations – and Secretary of State John Kerry was not told about it until the process was well under way. Again, this is not the first administration to operate this way – consider how Kissinger ignored the State Department at every opportunity when he was national security adviser – but that doesn’t excuse it.

The fragility of the balance of power between the White House and other parts of the executive branch was apparent during the efforts to secure congressional approval of the Iran nuclear agreement, during which Rhodes’ messaging skills were heavily relied upon by the administration.

This episode is closely examined in Samuels’ article, and this is where Rhodes opened himself to much of the criticism he has since received. Rhodes and his team recruited friendly arms control experts to speak at think tanks, post material on social media sites, and brief reporters. Rhodes told Samuels: "We created an echo chamber … They were saying things that validated what we had given them to say." He added: "We had test drives to know who was going to be able to carry our message effectively," and said of the agreement’s opponents, "We drove them crazy."

There is something vaguely Nixonian about those comments. Rhodes has since defended himself, writing "the objective of that kind of effort is to build as much public support as you can – that’s a function of White House communications." But when does an effort to build public support cross the line into manipulation of the public?

Ben Rhodes is now paying for his hubristic encounter with The New York Times. As Barack Obama wraps up his presidency with trips to Europe, Asia and elsewhere, Obama cannot be pleased that his presumed alter ego has become the focus of so much negative attention.

Despite Washington’s perennial fascination with personalities, larger issues are involved. The National Security Council staff is enormously powerful, and it has a duty to knowledgeably craft America’s global agenda and to provide honest information about that process to American and global publics. As the Ben Rhodes episode illustrates, that duty is not being carried out as it should be.

Note from the CPD Blog Manager: This piece originally appeared in The World Today.