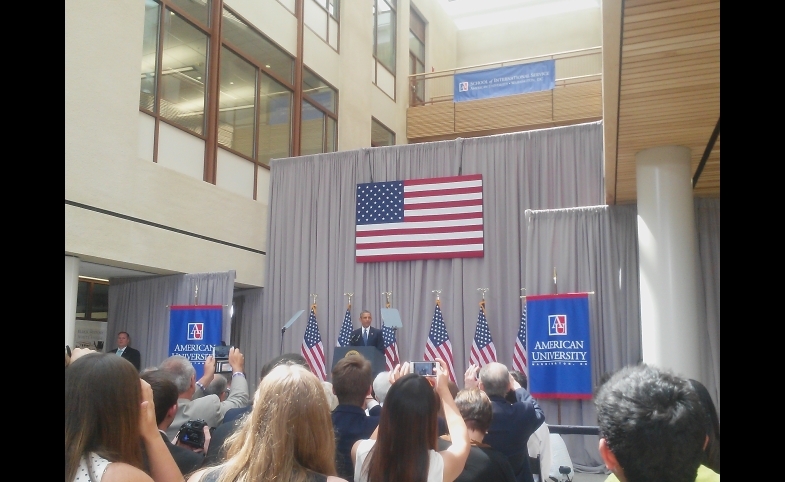 Yesterday President Obama came to American University to make his case for the Iran nuclear agreement. The White House specifically chose AU because it is where President John F. Kennedy’s delivered his famous 1963 “Peace Speech.”  The spirit of Kennedy and Obama’s speeches is similar in many ways. Yet how they differ speaks to how U.S. global relations have changed and how America may need to change as well to achieve its foreign policy goals.

A Plea for Peace - Ending the Mindset of War

JKF’s speech is often annotated as “a plea for peace.” When President Kennedy made his speech on June 10, 1963, the United States had only a few months earlier come dangerously close to a nuclear encounter. As I heard it growing up, President Kennedy “stared down the Soviets” during the Cuban missile crisis in November 1962. Recently, however, declassified documents  have revealed how close the U.S. was to crossing a nuclear precipice. Kennedy alludes to the vulnerability of a misstep: “the two strongest powers are the two in most danger of devastation.” His awareness of the costs motivated his “plea for peace.”

While Obama’s speech yesterday carried a similar message, it was phrased as “ending the mindset of war.” From the opening paragraphs to his concluding arguments, he spoke of America at war. As a presidential candidate he not only wanted to end the Iraq war, but “end the mindset  … characterized by a preference for military action … unilateral U.S. action, based on exaggerated threats.” During his time as president, he noted he had ordered military action in seven countries. “If we’ve learned anything from the last decade, it’s that wars in general and wars in the Middle East in particular are anything but simple.” 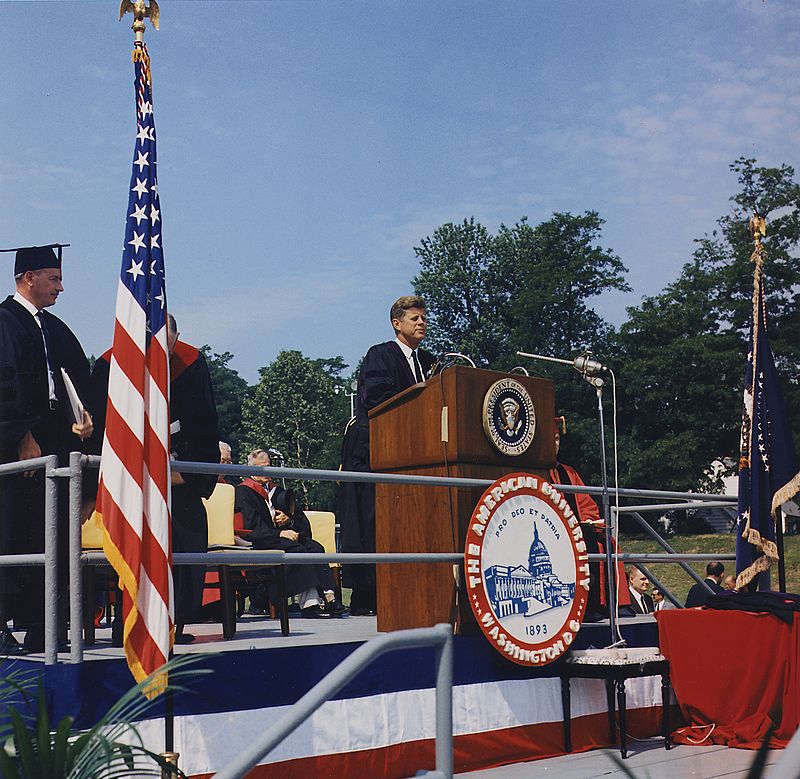 Foreign policy speeches typically contain multiple layers of audiences and messages. Both Kennedy and Obama had to address foreign foes as well as domestic critics. However, what is striking in the two speeches is how the domestic adversaries appear to loom larger than the foreign ones.

In 1963, President Kennedy faced his share of domestic opposition. Distrust of the Soviets was strong and palatable and the idea of diplomacy was not ideal.  He acknowledged the strength of dissenting voice: “I realize the pursuit of peace is not as dramatic as the pursuit of war.” Despite domestic opposition, the speech tone and text made clear the opponent was foreign: the Soviet Union. Kennedy tries to extend the olive branch of faith over possible misunderstandings with the Soviet Chairman Khrushchev, even calling for the establishment of a “direct line” between Moscow and Washington.

Fifty years ago, the U.S. president’s words were intended to span across an ocean and continent to a foreign opponent. In listening to Obama’s speech yesterday those farthest away politically and ideologically were closest to home. The vast divide he was trying to cross was what he described as the “partisan prison.”

What is particularly interesting in light of the up-coming presidential debates is Kennedy’s instruction to U.S. diplomats “to avoid unnecessary irritants and purely rhetorical hostility.” 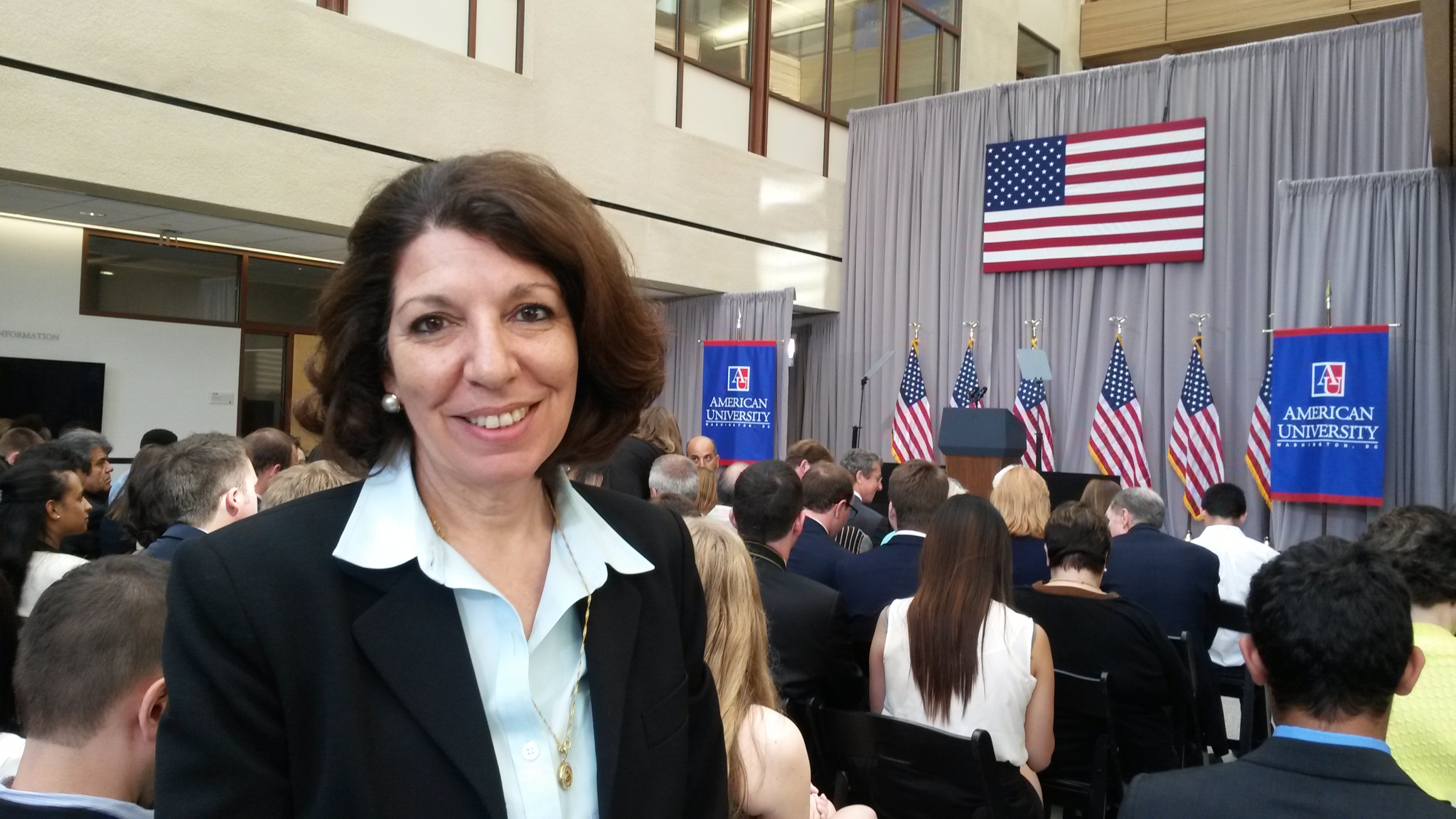 The author at the August 5 event. Photo courtesy R.S. Zaharna

In 1963, not all were in favor of talking with the Soviets and Kennedy had to convince them otherwise. In something that would probably not work today, JFK called on Americans to re-think their attitude about peace, about their adversary, and about their vision.  He labeled the attitude that “peace is impossible and war is inevitable” as a “dangerous, defeatist belief.” He challenged the simplistic attitude of enemy by complexity. In one paragraph, he casts a very human light on the Soviets who lost more than 20 million lives in WWII: “no nation in the history of battle ever suffered more than the Soviet Union in the second world war.” In another paragraph, he disparages the Soviet ideology and practice as “profoundly repugnant.”

In 2015, such self-reflection might be much needed, especially with the U.S. historical experience in the greater Middle East or with a country as complex as Iran. However, meditation is no match for what Obama told his audience would be a strong campaign “backed by tens of millions of dollars of advertising.” Hence, the direct call for action: “Contact your representatives in Congress. Remind them of who we are.”

“Who we are” is a point worth reflecting upon. Ultimately, Kennedy’ and Obama’s speeches both carry underlying messages about America’s identity, its place in the world and how best to achieve its goals. America’s rise over the past 50 years to a dominant power is clearly evident in the tenor of the two speeches. In that both presidents came to a university campus, that underlying message speaks to youth who must take that vision forward.

In re-listening to Kennedy’s speech on YouTube, there is a dual sense of caution and confidence. Caution reflects the awareness of challenges as well as the stakes involved. Kennedy directly mentions the possibility of “Pax Americana enforced on the world by American weapons of war.” Yet it is not force or might that he advocates but rather confidence in a belief in America’s ability to pursue peace: “We are not helpless before that task or hopeless of its success. Confident and unafraid, we must labor on.”

As I sat with others in the AU auditorium listening to Obama’s speech, his voice conveyed how clearly America’s rise to dominance over the past 50 years is. America’s place in the world, as Obama describes it, is not so much as being on top as it is being in the center. America, he points out, is not achieving its goal through unilateral actions or dominance, but rather building and maintaining international coalitions. Despite decades of U.S. sanctions against Iran, change came when the U.S. worked with Britain, France, Germany, Russia, China and the EU to forge the diplomatic agreement. The glue holding those relations together is U.S. credibility: “America's credibility is the anchor of the international system.”

Given how globally intertwined the world has become since 1963 and how much more it will be in the lives of today’s college youth, this message of strength through diplomacy, relations and credibility is likely to resonate powerfully.

The diplomatic impasse between the United States and Iran is officially broken after thirty-four years of mutual recriminations and mistrust. The need for a reinvigorated U.S. public diplomacy is essential to forge a new...