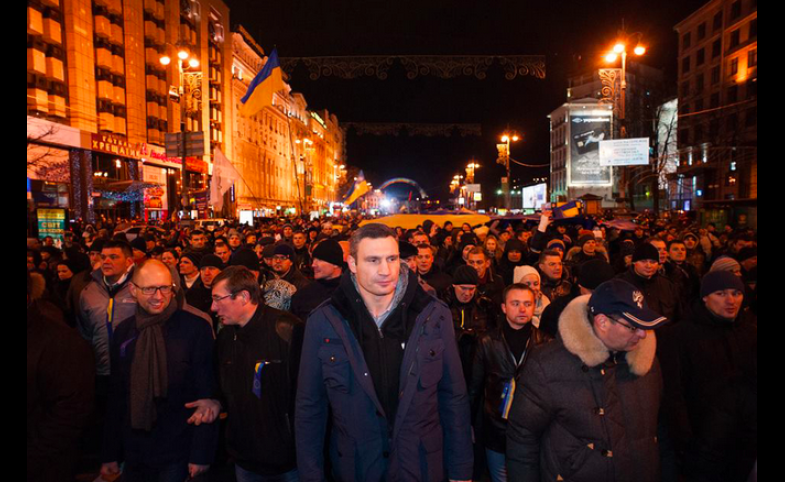 While the Klitschko brothers are known as champions of heavyweight boxing, the older brother Vitali is transforming himself into a politician that represents the new Ukraine.

Formerly called “Doctor Ironfist,” Vitali is extending his heavyweight champion brand far beyond HBO sports audiences -- he has emerged as the international spokesperson for the pro-Western, pro-reform Ukraine.

CBS reported: “Klitschko is the face of Ukraine's revolution and a leader of the opposition party known as the Ukrainian Democratic Alliance for Reform (UDAR). He advocates for Ukraine's membership in the European Union.”

Fareed Zakaria said on CNN: “He is the former world champion boxer. He's also one of the leaders of the revolution that toppled the Ukrainian government... Now he’s ready to fight the Russians.”

While his boxing record and worldwide fan base open doors to newsrooms, Vitali is building his name in politics practically from scratch: the reputation earned in sports doesn’t translate into credibility in global or national politics.

Therefore, it is interesting to explore how his team is working to support his developing image as a new, progressive politician who represents “the European” Ukraine to audiences worldwide.

First, a look at the official web site of his political party - UDAR (meaning “punch” in Ukrainian) reveals that while the English section is not updated every day, it features valuable content, including the party’s main objectives:

In press releases, Vitali advocates for Western policies. For example, he claims, “it is necessary to stabilize the situation in Ukraine and move forward with the implementation of reforms and high standards of living.”

The same messaging appears on the official @Klitschko Twitter account. One of the tweets calls for: “Pro EU, free elections, no corruption, against Ukraine's exploitation by current politic and power!”

Vitali’s bio on the official boxing web site Klitschko.com says he “is a man with visions. One of these visions is to help his home country Ukraine toward a better future… Vitali Klitschko was a leading figure in the fight to join the European Union (EU).”

Overall, his communications team is doing a great job supporting Vitali’s image as a pro-European, pro-reform, democratic leader, which strengthens the “pro-Western” perception of the country with international audiences.

It is a challenge though to transform the perception that Vitali is first of all a politician and not a world boxing champion worth an estimated U.S.$ 65 million.

The strategy to extend his dominant “boxing” brand will take consistency and repetition in political messaging. His team is on the right track; for example, his new political job is strategically moved to the top on his Wikipedia profile.

If I could advise his team on how to continue casting Vitali as a solid policy maker, I would suggest they book him – once appropriate after the crisis – to speak at prestigious universities (e.g. the London School of Economics), the annual Davos conference, Activate Summit of the Guardian or one of the TED Talks. Through these events, Vitali could reach new audiences, generate thematic news coverage and increase multimedia clout.

These kinds of images and associations will help further his transition from a boxing champion to a heavyweight European politician – and in that process, he will make a stronger case for international solidarity with Ukrainians.