Home|The VOA Charter is a Good Mission Statement. So Why Has It So Often Been Ignored? 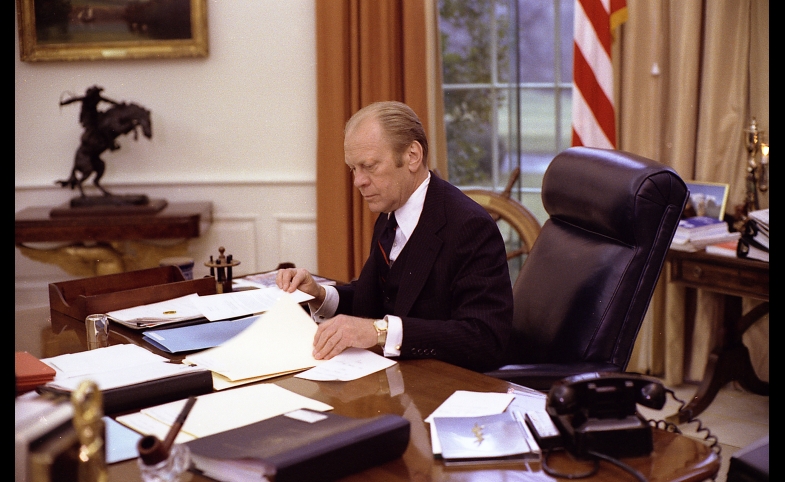 The Voice of America's Charter lies at the heart of VOA’s mission. Using language that’s as simple as it is ambitious, the Charter was designed to govern everything done by VOA, America’s oldest and largest government broadcaster. Its guidelines, signed into law by President Gerald Ford in 1976, are succinct:

“The long-range interests of the United States are served by communicating directly with the peoples of the world by radio. To be effective, the Voice of America must win the attention and respect of listeners. These principles will therefore govern Voice of America (VOA) broadcasts:

1. VOA will serve as a consistently reliable and authoritative source of news. VOA news will be accurate, objective, and comprehensive.

2. VOA will represent America, not any single segment of American society, and will therefore present a balanced and comprehensive projection of significant American thought and institutions.

3. VOA will present the policies of the United States clearly and effectively, and will also present responsible discussions and opinion on these policies. (Public Law 94-350)”

Sounds pretty clear. And except for the reference to radio, it’s as relevant today as it was nearly four decades ago. Yet a key element of the Charter has been so frequently ignored over the years that some members of Congress want to drastically reduce VOA’s mission, if not pull the plug entirely on it.

How did VOA get into this mess?

First, some context: A draft law that has circulated in Congress proposing a major overhaul of the Broadcasting Board of Governors (BBG) and its broadcasters, especially VOA, has so far retained the VOA Charter. But there is a yawning gap between how VOA’s defenders (mostly its current and former employees) and her critics interpret the requirements of the Charter’s third pillar.

The critics say that VOA has failed to “present the policies of the United States clearly and effectively,” as the Charter requires, and needs to be overseen by a policy-oriented body such as the State Department so the government can be sure that foreign audiences looking for accurate reporting and descriptions of U.S. policy can find it on VOA.

Their proposed remedy is a new one, but the problem, unfortunately, is not. Critics have complained for years about VOA broadcasts which failed to provide a description of U.S. policy, or balance, or a rebuttal to criticism of U.S. policy when necessary.

My personal experience may shed some light on why this part of the Charter came to be ignored in the newsroom. Not long after my appointment as the VOA director (2002-2006), I noticed a number of VOA stories about important international issues that failed to report what the U.S. position was on the issue, either through a quote from a U.S. government official or a description of past U.S. policy. This wasn’t optional information, or something uniquely required of VOA; this was the kind of information that should be – and was – routinely included in the stories written by news organizations such as The New York Times, The Washington Post, and The Wall Street Journal. Their stories wouldn’t have been complete without such information. Yet it was missing from VOA’s accounts.

When I asked a top newsroom editor why weren’t U.S. officials quoted, or at least the U.S. position described in these stories, her answer surprised me.

“That’s what the editorials are for,” she replied.

Like most government-funded broadcasters, VOA is facing an uncertain future because of factors that are outside its control, such as budget constraints and censorship by anti-democratic leaders in countries like Russia and China. But VOA’s future is also uncertain because of its own shortcomings.

“The editorials” she referred to were a broadcasting requirement that Congress had imposed on VOA years earlier, to ensure that it had a reliable platform for the government’s views. But the editorials, which were written by a unit of government employees who were not connected with VOA or its editorial operations, were unpopular with just about everyone, from the State department officers who had to vet them, to VOA’s broadcasters, and most of VOA’s audiences. Often stiff and didactic, the editorials were separated from the newscasts by both time and format, to ensure that listeners didn’t confuse the newscasts, which were supposed to be objective, with the editorials, which were clearly opinionated. But that separation also made them easier for listeners to miss or to ignore them, and our research showed that many listeners did just that.

Of course, the editorials were never meant to replace the basic elements that should be included in any story, whether it was by a VOA journalist or one from the private sector. But the editor’s belief that they somehow absolved the newsroom from reporting the U.S. position on issues revealed a serious misreading of the Charter.

Today, despite numerous personnel changes over the years, critics are still complaining about stories in which VOA has failed to live up to the requirements of the Charter. Wall Street Journal op-ed writer Sohrab Ahmari recently noted, for example, that a VOA English-language story on the Iran nuclear agreement did not quote any domestic U.S. critics of the deal, and two weeks ago, VOA aired an hour-long forum examining the threat from ISIS terrorists, and how they use social media, but did not include any U.S. government officials on its panel.

Like most government-funded broadcasters, VOA is facing an uncertain future because of factors that are outside its control, such as budget constraints and censorship by anti-democratic leaders in countries like Russia and China.

But VOA’s future is also uncertain because of its own shortcomings. Both secretaries of State in the Obama administration have been critical of the BBG, and members of Congress from both parties have made it clear they expect the BBG and its multimedia broadcasters to play a constructive role in the nation’s public diplomacy efforts.

VOA can still do that, but only if it fulfills all elements of its Charter, a document that clearly lays out the broad range of coverage that Congress expects. Just as importantly, VOA’s journalists need to understand that while the Charter gave them the editorial freedom they need to do their job, it did not give them the freedom to ignore their Charter.