In The Weeds: The Last Three Feet

Rendered razor sharp against a blurred background, the small flowers of late summer burst with reality. These are discrete examples of meadow flowers that our eyes usually gather in flattened focus massively and whole. 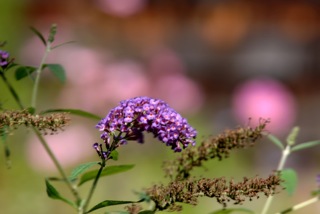 Here, instead of blooming buzzing confusion, a shallow depth of field sharpens the foreground object throwing the context out of focus. The choice to represent the flowers in my garden to you in thisBokeh fashion is clearly subjective. I want you to see their texture, their particularities, and their glorious imperfections one by one.

I also invite you to imagine the broader meadow, to see patterns in swaths of color, texture and form. Of what are these examples? What criteria would you use to sort and categorize? What might you glean about my garden from what you see here? What might you perceive in what I have chosen to reveal to you that I may not see myself? How would you assess and explain my gardening practice? Is there an underlying order, a recurring sequence that I, on my knees in the dirt, might not be privy to? How should I garden more wisely or well?

For those of us climbing the academic ladder of abstraction once again with the fall semester upon us, these tiny portraits are visual reminders that the public diplomacy theories we hold are best when based on observable reality. The practitioners who sow the seeds of empathy and engagement in distinctive landscapes are "in the weeds a little bit" as Jane Manes, then Cultural Affairs Officer of the American Embassy in Brazil, said introducing her story of the Jovens Embaixadores program now ten years in evolution.

Of course, there are concepts undergirding her work on the ground. There have to be. A decision to focus on high school students, for example, is also a decision not to target labor leaders. Resource constraints force choice. A theory is revealed by the very selection of those publics deemed relevant to American foreign policy. In the telling of these stories however, the theories of influence and engagement that drive the program direction are not articulated; they are embodied in the choices made by the professionals doing the work.

"Public diplomacy practitioners are at the forefront of our engagement with the world," says U.S. Ambassador to Brazil Thomas A. Shannon,

And so they are. On the ground in Iraq, Afghanistan and Pakistan as well as Bahrain, Brazil, Indonesia, Turkey and China, public diplomacy officers from the U.S. Department of State tell us their stories in the newly published book: The Last Three Feet: Case Studies in Public Diplomacy (2012). For the price of a posey, you can download it now. Edited by Dr. William Kiehl, the book is a convenient way to access the wonderful firsthand accounts of U.S. public diplomacy today. These field reports are also available as transcripts and You Tube videos on the Public Diplomacy Council and The George Washington University Institute for Public Diplomacy and Global Communication websites. The institutions first assembled and presented the case studies in a forum last November 2011.

Written in concrete journalistic language, rather than academic style, each essay colors in the sketch we have from our customary focus on public diplomacy strategy as pronounced and executed by senior leaders in Washington. The Last Three Feet is not about the big Washington directed public diplomacy evaluated beautifully by Mathew Wallin in the recently published The New Public Diplomacy Imperative (American Security Project, August 2012). Abroad, down in the weeds, the actual experience of field hands is messier and arguably more effective.

For example, Rachel Graaf Leslie's challenge in spring 2011 was to communicate and clarify the U.S. government's nuanced policy position during the unrest in Bahrain. Based in Manama during Arab Spring, Leslie had to work around inflamed, sectarian traditional media gatekeepers who parsed the carefully balanced American policy messages to highlight support for their partisan positions. Moving to the Facebook platform solved the problem of selective reporting by Bahrain's traditional media by allowing Leslie to disseminate unedited policy statements to the Bahraini public in Arabic.

Unexpectedly however, the physical world conflict between Bahraini Sunni and Shi'a ambushed her on-line. The American Embassy Facebook space erupted in virtual combat as partisans populated the comments section dueling with "poisonous sectarian commentary." The sudden proxy war of words in Arabic furthermore alienated the substantial American community on the island who had relied on the Embassy's Facebook page for English language situation reports to calm their jangled nerves.

Now battle tested in the new media ecology during a revolutionary political moment, Leslie knows that the digital and physical enmesh to form what sociologist Nathan Jurgenson calls "augmented reality." Facebook is not a sanctuary; it is highly flammable. It can be explosive. Little wonder then that Leslie concludes her essay with cautions that could easily serve as research questions for the rest of us:

“…my experience, at least in Bahrain, raise questions of how in these rapidly changing landscapes, we can most effectively engage, at what level, how often and how many of our resources we allocate to do it. … But we need to examine how and to what degree we participate in those conversations, consider our rules of engagement with our online interlocutors, and consider what that potential blowback might be. Also I think we need to establish good metrics of how we rate our success in terms of social media. Counting the likes on Facebook or the number of tweets doesn’t necessarily mean that people are agreeing with us. And we need to know whom we’re talking to, frankly. In a small place like Bahrain, it might be more effective in certain instances to have one-to-one conversations as opposed to trying to broadcast to the many.
And most importantly, we have to evaluate how all of this relates to our policy goals. Our policies and public diplomacy must be in lockstep. But at times I feel like our zeal for public diplomacy outreach, and of late using social media, can sometimes be at odds.

For those of us with pencils sharpened and highlighters at the ready as September has us back in classrooms, The Last Three Feet invites marginalia. I found myself putting Leslie and her Foreign Service colleagues in speculative conversation with scholars who have written theoretically about the tools she uses to chip away at the rock face of reality. "One for Morozov!" I jot. Iojo [pay attention] Shirky!" I scribble. I highlight phrases that need definition. I fill the white perimeter with notes on networking, listening, narrative, and relationship. What we think these concepts should look like in public diplomacy and what these essays reveal are not always in sync. In this fractal universe, some strait-edged theories don't compute; others appear validated.

It takes stories like these now and then to remind us that the practice of something is of a mingled yarn. Reality does not conform to theory. It should be the other way around. So, pack this text in your hip pocket as you climb that ladder of abstraction this semester. Consider it a GPS for our disciplined journeys into that background blur where we can occasionally sharpen into focus what those working in the weeds never see.