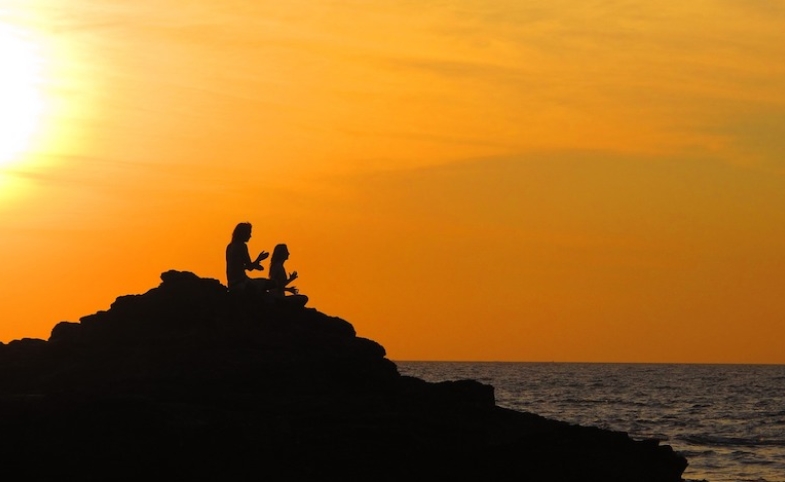 Modern technological and scientific advancement has made our life easier—be it everyday comfort or connectivity. But this modern life is also bringing a loneliness epidemic. Social isolation as a result of a monopoly of western-scientific-technological values has now become a policy concern for nations. Unsurprisingly, the UK last year appointed a Minister for Loneliness. Disconnection between people in the community, between generations and groups, and even disconnection from oneself have become inevitable in the present time. We have pushed ourselves towards the outer world so much so that we sometimes do not know our own inner discontentment.

The famous scholar of interfaith dialogue Raimon Pannikar has said “Man is only Man with the sky above, the Earth below, and his fellow beings all around.” In contemporary times, no single person or tradition can cope with the problems and paradoxes of the total human predicament. Let’s begin by accepting that we need each other. Could the East provide a solution to modern day problems of anxiety, depression or loneliness? One possible solution could be the yogic practices uniting human mind and soul that has been infected by modern life.

A Need for Inward Journey and Healing Diplomacy

Our contemporary cross-cultural human situation provides an opportunity for cultures and traditions to reawaken and renew one another, in a spirit of mutual learning, correction and dialogue. As against the western traditions which appear to be based on outward exploration (invading or conquering the outer world), Indian tradition appears to be based on plus intra (ever deep), i.e. self-exploration. This inward journey leads to a feeling of oneness with the cosmic and even allowing the universe to invade one’s being, which is exemplified best in certain yogic practices. The idea of healing our lives through an inward journey is pertinent in contemporary times. Yoga has the power to alleviate human sufferings.

In September 2014, an overwhelming number of nations joined hands with Prime Minister Modi to adopt an International Yoga Day every year on June 21. Since then, revival and export of Yoga as Indian soft power has been well taken.

In the West, yoga has been reduced to a few asanas or meditation and has been subjected to commodification. This limits the understanding and benefits of yoga. “Yoga” as a part of dharma may be understood well only on cosmic worldview which stands for the centrality of the cosmos, without which existence the human is not possible. Here, man is not above nature, but only part of nature, having his duties to perform for proper maintenance of the universe. The ashtanga or eightfold path of Guru Patanjali connotes the holistic yogic practices leading to harmony with self, ecological balance, tolerance towards other systems of thought and empathy towards all creations.

“Healing diplomacy” as Professor Nancy Snow suggested (during a personal conversation) could be the gift of Indian tradition to the world. In September 2014, an overwhelming number of nations joined hands with Prime Minister Modi to adopt an International Yoga Day every year on June 21. Since then, revival and export of Yoga as Indian soft power has been well taken. A yoga practitioner himself, Prime Minister Modi before the celebration of 5th International Yoga Day (2019) appealed to the world to make yoga an integral part their lives. Without touching upon the religious and Vedic references, he made pertinent points for embracing yoga as a way of life. The Common Yoga Protocol by the Ministry of AYUSH, Government of India aims at enhancing general awareness and disseminating an introduction to yogic practices. India’s Permanent Representative to the UN, Syed Akbaruddin, calls yoga diplomacy beyond verbal postures using hashtags like #yoga4ClimateAction and highlighting the cosmic duty. Sharing of positive stories about practicing yoga makes yoga lead by power of example. As Prime Minister Modi conveys:

How is the Land of Origin of Yoga Doing?

Ironically, the land of origin of yoga is not doing better in terms of a health index. Political ignorance and structural challenges as a result of a modern way of life have to be blamed amid many reasons. India ranks 141 in Global Peace Index (out of 163 nations) and 140 in Global Happiness Index (among 156 nations). Apparently, India is one of the greatest victims of the blind-spots of modern life. In addition to existing challenges, digital detox would be another challenge in near future as number of mobile phone users in India rose to 813.2 million recently.

Turning inward through yogic practices could enable response to existing challenges in a better way. For this, India first needs to de-colonize its belief system, unlearn some modern lifestyles and revisit its own civilizational roots to realize the full potential of its past traditions. Establishment of Ministry of AYUSH in 2014 and National Health Policy in 2017 are a welcome step. Along with grassroot socio-economic problems, the Government and people in India need to focus on physical and mental well-being and sustenance of the ecological balance by embracing yoga as a way of everyday life.

Humankind deserves a better today and tomorrow, and celebration of International Yoga Day is a great reminder of that.