Recently, I argued that Pakistan is not in a position to be either a friend or foe of the United States, due to the de facto civil war among Pakistani's pro-Western and anti-Western citizens.

I stand by this statement, but more nervously in the wake of the NATO bombardment of 24 Pakistani soldiers. There is much that we don't know about the nature and details of the incident—but it seems fair to say the reaction of Pakistani officials is not one of a "friend" of the U.S. and NATO forces.

As a Pakistani-American who longs for better ties between the two nations, and has attempted to advance this these efforts in small ways, I find this situation discouraging. If Pakistani leaders were intent on having a strong relationship with Washington, they would have taken their grievances quietly to American officials. They may have been able to push Washington to make certain changes or to further open the aid spigot. Instead, Pakistani officials appeared to use the incident as an excuse for a public temper tantrum, inciting street protests that involved the usual nasty warnings and nastier spelling mistakes. 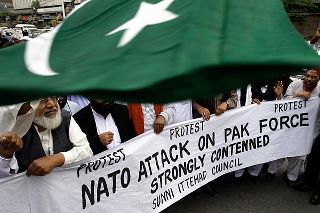 The Pakistani reaction, coupled with a cutoff of key forms of cooperation, may be an act of emotional retaliation by the Pakistani military in the wake of the bin Laden raid — an attempt to show that it has the upper hand and higher moral ground.

Pakistan could be in danger of becoming a failed state, or an isolated nation like North Korea. But the coming years will most likely involve cautious courtship of this geopolitical chess piece by Washington, Beijing and Moscow. Given Pakistan's tensions with India, coupled with Washington's strategic preference for India, Washington faces long odds in turning Pakistanis more favorably toward America.

The drone-obsessed Obama administration has been surprisingly tone deaf in its willingness to stomp on Pakistan's sovereignty in pursuit of its own objectives. The administration will learn that as a consequence, Pakistan is now more close to positioning itself as an American enemy than it was during the era of George Bush. This would be bad not only for Pakistan, but also for global security.