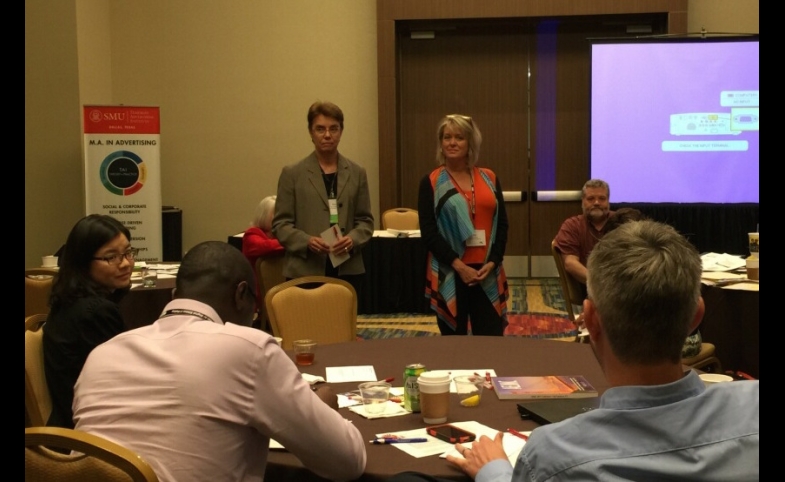 An Attempt to Unify the Public Diplomacy and Nation Branding Camps

As part of my CPD Research Fellowship project, a symposium was held last week (August 5) in San Francisco that brought public diplomacy and nation branding scholars together to discuss the linkages between the two fields. The symposium was co-sponsored by the Temerlin Advertising Institute at SMU and the USC Center on Public Diplomacy. My good friend and research partner, Dr. Alice Kendrick, joined me in organizing the one-day event.

The symposium’s aim was to look at the field holistically and attempt to build much needed theory to support practice, research and teaching. To this end, scholars were invited to contribute papers based on my newly proposed Model of Country Concept (see my graphic below). Fifteen papers were chosen from more than 40 submissions and were presented at the Marriot Marquis prior to the AEJMC conference. 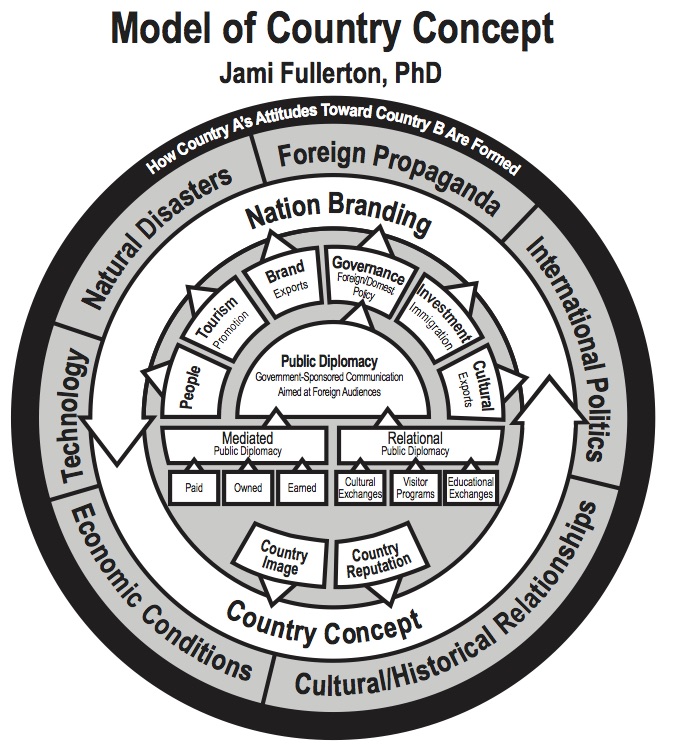 To start the day, I noted that when we refer to the field, we often use a compound term, “Nation Branding and Public Diplomacy,” which illustrates the need to see the discipline holistically. Perhaps there is a term that encompasses both areas, I asked? Might that be “Country Concept?”

The Model of Country Concept illustrates the many integrants or influences that bear on global citizens’ formulations about other countries – in essence how a country’s reputation and image might be shaped. The Model of Country Concept was conceived to bridge what I see as the “two camps” in the field – nation branding (camp one) and public diplomacy (camp two). The model was inspired by two pioneers in the field – Simon Anholt (from camp one) and Guy Golan (representing camp two). So we brought in Simon via Skype at the start of the day and later heard from Guy, who was live with us in San Francisco.

Simon generously gave the group about a half hour of his time. He carefully explained his current view on the idea of nation branding and answered some questions from us. Simon explained that he coined the term “Nation Brand” in the 1990s to describe the image of a country, but he never intended for Nation Brand to become Nation Brand-ing. He firmly contended that no one “can actively brand a nation.” He then focused on his newer notion of “Good Country” that measures the good acts (according to secondary statistical data) that nation’s engage in on the global stage. According to Simon, “doing good” is the key for countries to earn favorable international public opinion.

Guy Golan’s remarks were much more positive as he called the field a “start-up” and likened the academics in the room to Amazon and Google. He invoked some of the original thinkers, including Simon, and said that we are now part of “public diplomacy 2.0.” With that encouragement, the paper sessions began.

Paper topics ranged from theoretical discussions of the model to applied research on tourism, relational public diplomacy and digital diplomacy. Research methods from case studies to structural equation modeling were employed. We saw network mapping of Twitter posts surrounding the loosening of diplomatic relations with Cuba and a visual analysis of websites from break-away regions such as Catalonia and Scotland.

The Model of Country Concept was conceived to bridge what I see as the “two camps” in the field – nation branding (camp one) and public diplomacy (camp two).

All of the papers were placed somewhere on the Model of Country Concept and many of the presenters provided suggestions for improvement of the model. Definitions of public diplomacy were debated, although most agreed that public diplomacy was “government sponsored communication aimed at foreign audiences” and placed similar activities by non-state actors elsewhere on the attitudinal model. The group also wrangled over the relative position of nation branding versus public diplomacy. Because the Model of Country Concept flips the position of nation branding from its inferior spot on Golan’s Integrated Model of Public Diplomacy to an over-arching position on the new model, we tried to reconcile exactly how the “two camps” fit together. Good progress was made, but I can’t say that we all agreed.

At the end of the day, we were all invigorated by our ground-breaking attempts to move our start-up field forward. We pledged to continue our research and to talk further. Papers will be revised and edited and many will appear in a book about the Model of Country Concept to be published next year by Peter Lang Publishing.

The following is a list of paper presentations made that day:

Note: This blog is part two of a two-part series. Part one can be found here. Simon Anholt arrived at an outlook similar to that of Ambassador Choi’s commercial paradigm after a decade of consulting governments on how to...

Simon Anholt, an independent advisor on national identity and public diplomacy known for coining the "Nation Brand," has joined forces with Harvard University's Madeleine Hung to create The Good Country. Born out of...