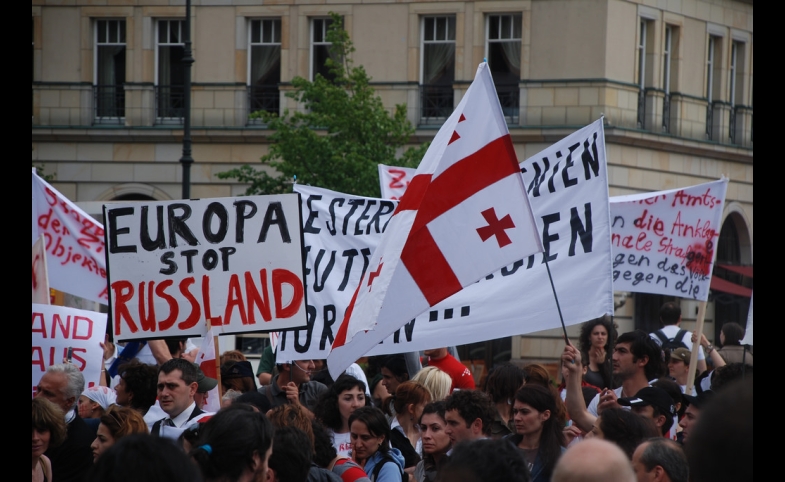 TBILISI, Georgia – For most Americans today, Russia is more of an annoyance than a threat. But if you live in Georgia, a small country on Russia’s southern border, the Kremlin remains a menacing presence. If the Russian bear becomes hungry, Georgia might be a morsel too tempting to resist.

Georgia is the proud and independent descendant of ancient kingdoms dating back thousands of years. Like others in the Caucasus, Georgians have fought Russians many times, most recently in 2008, when Russia invaded and unilaterally recognized the independence of Georgia’s Abkhazia and South Ossetia regions, where Russian troops remain.

Given the ongoing Ukraine-Russia conflict, Georgia is seeking to strengthen its ties to the West. It has been persistent in its effort to be granted membership in NATO, which was the topic of an early-April conference in Tbilisi that attracted participants including Georgia’s president, prime minister, and numerous other officials, as well as the U.S. ambassador, NATO representatives, and an array of other regional security experts.

Georgia’s greatest asset in its quest for membership is moral suasion, an element of soft power.

Georgia realizes that its strength lies in its willingness to be a constructive member of the NATO community. This commitment is seen in Georgia’s defense budget, which already meets the NATO requirement of at least 2 percent of total GDP (which only a few of the current members respect), and the deployment of Georgian troops in NATO missions in Afghanistan and Kosovo.

Georgia knows that its prospective NATO membership is viewed with angry wariness by Russia, and so it must convince not only the organization’s leadership in Brussels but also its constituency of member states that Georgia being a part of the defense alliance is both feasible and useful. The case of Ukraine casts a shadow on these matters. Ukraine is not a NATO member, but if it had been in 2014, would that have deterred the Russian invasion or forced NATO meet its obligation to defend a member country? Whether NATO is willing and able to block Russian adventurism is a high-stakes question.

Much emphasis at the conference was placed on public diplomacy. Georgia’s greatest asset in its quest for membership is moral suasion, an element of soft power. Further, communication techniques in this process are invaluable, particularly because Russia is so skillful in its use of disinformation. Georgia includes an Armenian minority—about 6 percent of the country’s population—that has been targeted with social media rumors to the effect that if Georgia joins NATO, a military base populated by Turkish troops will be opened in the country. Given the Armenians’ antipathy toward Turkey, these reports—which are untrue—have produced anti-NATO sentiment.

Some of the rhetoric at the conference seemed designed to dampen Georgian expectations, suggesting alternatives to NATO membership. There was talk about strengthening Georgia so it could resist unwanted advances from its nasty neighbor to the north. But this is nonsense. Georgia without NATO is no match for Russia.

When NATO expansion began after the Cold War, implicit in this new balance of power in Eastern Europe was a commitment by NATO—and particularly by the United States—that nations formerly within the Soviet Union’s sphere of influence could feel confident that they would be safe from renewed Russian acquisitiveness. Georgia, which has a solidly pro-Western worldview, deserves the stable future that NATO membership would help ensure.

NATO, the world’s most powerful military alliance, has recently released a strategy to counter hybrid threats. This strategy recognizes the fact that the security environment is neither dominated by conventional threats,...