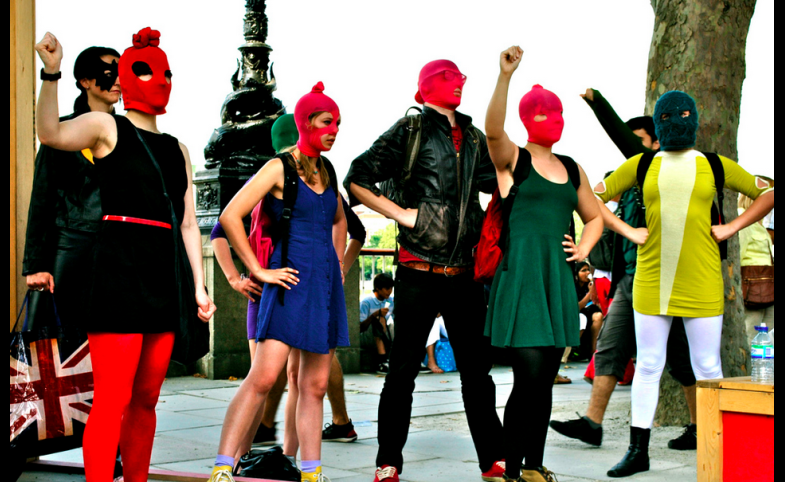 Topless demonstrators in Ukraine are part of the self-defined “sextremist” Femen group – radical women protesting the Russian invasion of Crimea. Femen is a stark example of frontline femmes who use their bodies and their voices to fight status quo corruption, war and a political oligarchy. They are the most recent vocal group of women to take to the streets to defeat structures that often claim them as the first and greatest casualties.

Russian aggression has driven women to exhibit the latest extreme manifestation of a long protest tradition dating back to the ancient Greek play “Lysistrata,” in which radical women 2,400 years ago withheld sex to organize for peace. For those watching the contemporary mass protest movements, it is noteworthy that women are again leading many of the most effective and jarring protests. Whether Ukraine’s Femen or a provocative punk rock band in Russia, women are in the lead squaring off against authoritarianism in bully states.

Coinciding with the run-up to the recent International Women’s Day, one Femen protester was violently dragged along the street in front of the Crimean parliament by burly male, fur-hatted, pro-Russian militias. The near-naked woman in body paint resisted while screaming, “Stop Putin’s war!” It was shocking street theater and effective messaging.

In Russia, the punk musicians with a name that gives pause – Pussy Riot – have served prison time, been subjected to physical abuse and remain a thorn in President Vladimir Putin’s side. Originally sentenced in 2012 for their irreverent and confrontational performance in the main Moscow cathedral, the masked group continues to protest Putin’s power with aggressive performances even after Putin handed them a Sochi Olympics-timed pardon.

Reminiscent of bra burning in 1960s America, feminist political protest is not for the timid. Both Russian and Ukrainian feminist groups, however, believe they are living in extreme times calling for extreme measures. When Putin’s doublespeak tries to justify Russia’s military actions and gross violations of international law, these women’s visceral protests cut through the palaver and propaganda.

My own experience with Russian women protesters is vivid. As a correspondent in the U.S.S.R., I knew that the KGB headquarters in downtown Moscow was a feared building where people who went in seldom came out the same. During the waning days of the Soviet Union, I visited the ominous Lubyanka with a group of mothers of missing, killed and otherwise destroyed or drug-addled Soviet soldiers who occupied Afghanistan – a country some Russians called the “giant mincer.”

My own experience with Russian women protesters is vivid. As a correspondent in the U.S.S.R., I knew that the KGB headquarters in downtown Moscow was a feared building where people who went in seldom came out the same. During the waning days of the Soviet Union, I visited the ominous Lubyanka with a group of mothers of missing, killed and otherwise destroyed or drug-addled Soviet soldiers who occupied Afghanistan – a country some Russians called the “giant mincer.”

These mothers organized and fearlessly marched into KGB headquarters to demand information about their sons. They confronted atypically deferential KGB agents – many of whom likely saw their own mothers in the faces of the agitated but otherwise powerless group. The women had nothing left to lose. The mothers’ movement should be widely credited for organizing public opposition to a war they helped to end.

The prevalence and prominence of effective modern female protest is not limited to extremists, mothers or to Slavic states. Many contemporary feminine fights for human rights are quiet and can be as simple as the act of going to school. Pakistani schoolgirl Malala Yousafzai dared to seek an education and was rewarded with a Taliban bullet in the head. Having survived the assassination attempt, the recovered 16-year-old continues to promote the right of girls everywhere to have access to a schoolroom. To the world, she has become the face of hope and change in Pakistan.

Elsewhere in the Islamic world, women in Baghdad recently dared to march in the street to protest a proposed religious-based law that permits 9-year-old girls to marry and which always grants fathers child custody. In Saudi Arabia, defiance is a woman in the driver’s seat of a car.

In noisy counterpoint in Argentina, a protest tradition, started more than a decade ago, brought women into the streets banging pots and pans. “Cacerolazo” is now a popular way to express society’s economic despair at being unable to fill those kitchen pots and pans with more food.

Extremist women may be the most visible protest class these days. But it was a mostly peaceful, broad-based protest movement made up of men and women that collected in Kiev’s Maidan and caused Ukraine’s President Viktor Yanukovych to flee to Russia. Whether leaning in or speaking up, women are noticeably standing out in the current battles against war and corruption and the current Ukraine crisis. I’m a guy and I’ve noticed.

This piece was originally published on The Sacramento Bee.
To read the original piece, click here.