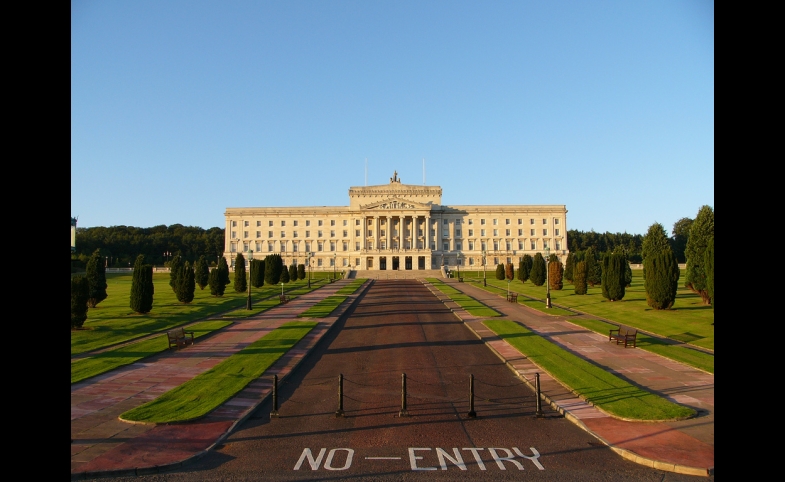 Gary Hart has become the latest in a line of U.S. Senators and diplomats to wend their way to Northern Ireland to serve in the role of adviser, negotiator, and conscience-in-chief to the political process in Stormont. This kind of “dirty work’” of diplomacy generally operates unseen and is remarked upon only at the “public diplomacy moments” of arrival, departure, special agreements, and perhaps failed attempts. The Special Envoy of the President and the Secretary of State for Northern Ireland is a case in point. Not since George Mitchell has the spotlight fallen squarely on the envoy’s every step in their ongoing and unenviable work as go-between to the fickle Northern Irish political parties.

The Special Envoy post itself has a rather curious past in the transatlantic world. In an interesting bit of public diplomacy meets domestic politics, the idea was floated by Bill Clinton in his presidential campaign. From there, it slowly morphed into a back door for the president to be involved without, it was assumed, ruffling too many feathers. However, when it came time for the actual appointment of Mitchell in 1995, he was publicly welcomed by officials, but certainly not warmly embraced behind the scenes by then-Prime Minister John Major. It doesn’t take much investigation into this public/private schism to see a link to Clinton’s appointment of Jean Kennedy Smith as Ambassador to Ireland in 1993 given that she was accused, at various points, of favoritism, forgetting exactly where her borders began and ended, as well as the far more serious charge of leaking information to the republican elements and causing great difficulty with then-U.S. ambassador to the UK Raymond Seitz (the only foreign service officer to hold the post). Despite the rocky start, Mitchell became an effective part of the machinery and was able to facilitate real progress at a key moment in the peace process--a testament to Mitchell’s skill as a consummate diplomat, if not an expert tightrope walker.

Hart...said, in his first interview, that the U.S. was "disproportionately interested" in Northern Ireland, and acknowledged that it was a “complicated position of wanting to help but not wanting to be intrusive. It's a delicate, often diplomatic, endeavor."

Richard Haass, George W. Bush’s appointee from 2001-2003, was interestingly called back to the Province by President Obama last year in an effort to sort out some knotty tangles around flags, parades, and particularly the question of who owns--or has the opportunity to control--Northern Irish history. Almost all of the political faces had changed since he was in harness which, given that Northern Irish politics are nothing if not dominated by personality and playing to the public gallery, may have hindered his chances with the new generation. Yet those previous efforts had borne enough fruit for President Obama to believe that he might be successful again with the help of Professor Meghan 0’Sullivan. O’Sullivan, a well-connected Beltway rider, is a senior fellow at Harvard University's John F. Kennedy School of Government Belfer Center for Science and International Affairs--the stomping grounds of previous envoy Paula Dobriansky, who formerly worked under Richard Haass at the Brookings Institution (pointing to a whole new layer of personal diplomacy in the context of the revolving door of appointments and public service). Unfortunately, even O’Sullivan and Haass together--and despite some very prominent photo opportunities--couldn’t break the impasse and they left last December, empty-handed. Hart, part of this clubbable group, has now been sent to take up the cudgels in the hope he can broker some kind of deal (or more likely multiple deals) by the start of the parade season.

The Special Envoy position also raises some important points about diplomacy as an institution: the fact that one country could, in a matter-of-fact way and potentially for entirely domestic political reasons, appoint someone in their own government to effectively broker deals with parties in one part of another country, seems at the very least anomalous. This is a reality Hart recognized when he said, in his first interview, that the U.S. was "disproportionately interested" in Northern Ireland, and acknowledged that it was a “complicated position of wanting to help but not wanting to be intrusive. It's a delicate, often diplomatic, endeavor."

To their credit, both Prime Minister Cameron and Ireland’s Taoiseach, Enda Kenny, were supportive if restrained in their public statement regarding the arrival of another Yank and despite the fact both may have reason to be miffed. Cameron’s recent work on the devolution debate touches more than the edge of the budgetary aspects of the current problems in Belfast while Kenny knows that it is the voices of those who should be on “his” side that are calling the loudest for American involvement.

Thus, it seems important to ask: Why now? What encouraged Obama to re-engage in Northern Irish politics after leaving the post vacant from 2011 - 2014? A peace process that has largely disappeared from the world’s limited attention span, and issues that appear like indigestible morsels of the Troubles pushed to the side of the political plate, are suddenly gaining attention despite all of the complex and potentially more dangerous issues looming.

Surely only a true cynic would even suggest that, with an election on the horizon and the President’s ratings at an all-time low, public diplomacy may be the reason. The relatively small world of Northern Irish difficulties could seem reminiscent of a simpler time, when conflicts looked more familiar and even more resolvable. Perhaps a conflict with only the occasional flashing ember seems a good place to leave a record of success for a still-potent domestic constituency when the rest of the ledger is dubious at best. Whatever the catalyst, diplomats are trained for such moments, and Vice-President Biden has put his personal trust in Senator Hart to achieve results in this relatively unheralded corner of the international arena. Hart, for his part, rightly identified his task as a delicate one, and there is no task more delicate than those at the precise point when the private diplomat must also play the public diplomat’s hand.

In a world fraught with local, national, and international fissures, animosities, and violent conflict, the Republic of Ireland stands far above the fray as a stellar example of how a country's...