Home|Subnational Cooperation and the Environment: The Public Diplomacy of Survival? 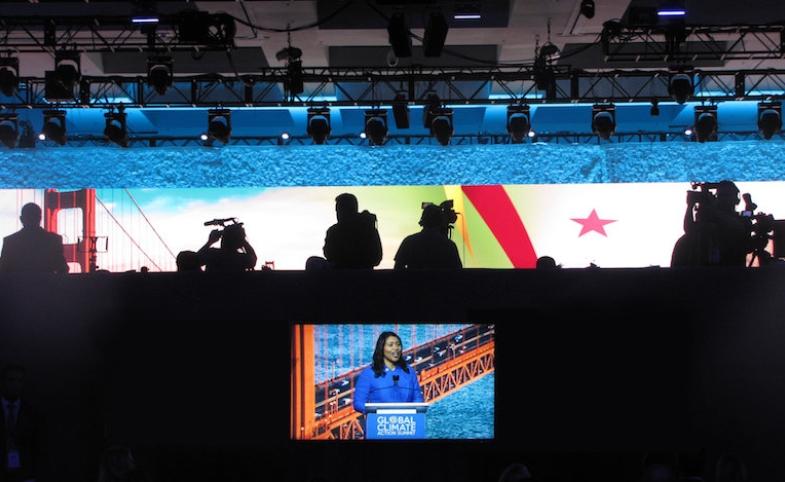 Subnational Cooperation and the Environment: The Public Diplomacy of Survival?

Traditionally, the study of sub- or paradiplomacy focused on entities seeking to join the club of sovereign states—Québec and Catalonia are examples that dominated the literature. But the environmental diplomacy work currently being done, specifically the public diplomacy work that took place in September at the Global Climate Action Summit in San Francisco, should bring what was essentially a niche category of diplomatic studies to the foreground.

Attending as an accredited journalist for The American magazine in London, I found the event an experience to behold. The large pressroom, with its helpful staff and live monitors of the proceedings, was always buzzing. Stars from every constellation—film, business, politics and, of course, the environmental wonks—came to make statements and answer questions. Meanwhile international statesmen and women from every part of the world and level of government were busy negotiating, educating and networking, with public diplomacy at their respective levels being the fundamental reason for their attendance. The questions that this event raised are twofold: did the summit actually achieve something, given that these “lower” entities of government are often not in charge of the global agenda, and, more broadly, what might the summit portend in terms of public diplomacy and perhaps even the nation state writ large?

The heart of the answer to both of these questions rests with the growing role of the “subnational actor.” Not a phrase that trips lightly off the tongue, it nonetheless has never had more air time—outside some arcane political science conference—than these two days in the Moscone Center, with the highly promoted summit featuring “4,000+ delegates, 25+ sessions, 325+ affiliate events and 500+ pledges.” The stage backdrop, the exhibition hall, the materials being distributed and the speeches of speaker after speaker were saturated with both the ideal and the reality of subnational actors acting in their clear and self-defined interests toward the goal of combating climate change. Through their collective actions, more importantly, these subnational actors are reshaping traditional ideas of international affairs and its diplomatic behaviors.

For those interested in diplomacy as an institution and the public diplomacy not only of the nation state, but of every actor actively engaged on the global stage, this is a crucial moment.

On the question of the summit’s achievements, the jury will be out for some time. What we do know is that 9,000+ municipalities grouped under the C40 and the Global Covenant of Mayors, the 217 members of the Under2 Coalition (covering a fifth of the world’s population and two-fifths of its economy), and the 155 American companies, 115 cities and 20 U.S. states that are part of America’s Pledge all stepped up. The surprise may be why it took so long, given that roughly 50 percent of the world’s population currently live in cities (a percentage expected to rise to 70 percent by 2050) and urban areas consume two-thirds of the world’s energy, thus putting those governing cities at the point of the most direct impact from increasingly ugly weather events and rising sea levels created by climate change. The “high” international politics of security and the military affairs have been supplanted by the “low” politics of economics, transport and health in the form of human victims of climate change. Mayor Garcetti of Los Angeles has recognized the new reality of global city politics and argues these concerns are the most important sites of diplomacy in the 21st century, as they will be played out on the streets of cities like his.

On the larger question of the nation state’s viability in addressing climate change, the summit is surely evidence that the compression of time, space and distance, long heralded as the defining feature of globalization, is now the business of everyday diplomacy, as demonstrated by countless subnational actors pushing their interests from the local to the global stage. Units that have no power in the traditional frame of international affairs are now taking positions and making decisions that have already, and will increasingly, affect the global community. Their collective efforts have effectively shifted the fundamental cornerstones of sovereignty by breaking down the hierarchy of players and undermining the dominance of the nation state. The consequence is a blurring of the roles and abilities across multiple levels, allowing an unprecedented range of levels to engage in this diplomatic space.

Back in the late 1980s and 1990s, the term “globalization” was bright and shiny and on the lips of the global commentariat. Economists could hardly contain their glee toward predictions of the nation state’s demise. Looking back from the experience of an event such as this summit, one might argue that, rather than being the inception of some kind of millennial “end of history” ushering in a happy liberal consensus, that discussion was actually a fin de siècle moment marking the beginning of the end for state sovereignty as is traditionally understood. Further, while the crowing of the economists and the hand-wringing of the political scientists at the time may have been a bit premature, they may have been correct in the longer run. What if the real news of the Trump Administration is that the “end” we now find ourselves living through is more accurately understood as the end of the dominance of the nation state as the premier unit of global governance?

For those interested in diplomacy as an institution and the public diplomacy not only of the nation state, but of every actor actively engaged on the global stage, this is a crucial moment. We can finally move beyond the sterile discussion of the “post era,” be it Cold War, 9/11 or the 2008 recession, and into a real discussion about the features of networked diplomacy and how the "globality" of compressed states affects every site of diplomatic interaction. Diplomacy has had many adjectives and prefixes attached to its work over the years, so while “environmental” is, in one sense, just the latest of these monikers, it is also perhaps the most important as the subnational/nonstate actors involved in this effort are now shaping our global future and perhaps even our global survival. Surely this should suggest that understanding and even improving the work going on in these interstitial diplomatic spaces is now an urgent task for the field.

Photo by Ben Paulos | CC BY 2.0 (Photo was cropped and repositioned)