Home|NATO After the Warsaw Summit 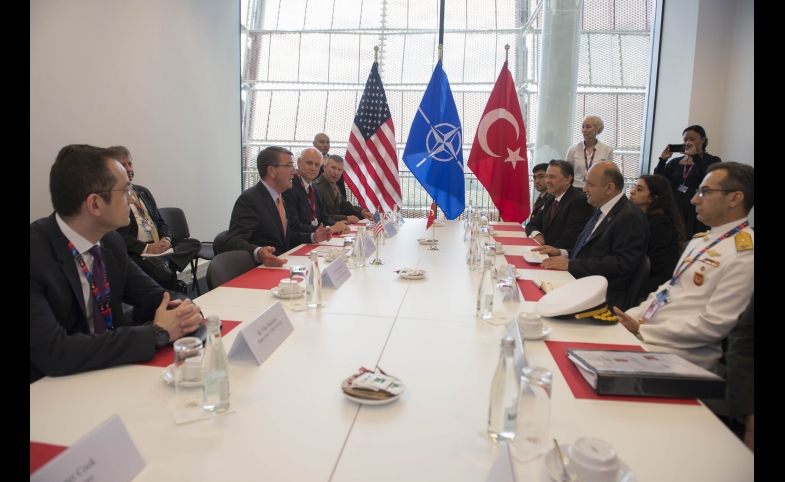 On July 8-9, 2016, some of the world’s most powerful heads of state, as well as their foreign and defense ministers, gathered in Warsaw for the NATO Summit. NATO summits, convened every year or two, represent important public diplomacy opportunities for the Alliance. During these summits, NATO nations and partners meet in order to produce a communiqué, which outlines the Alliance’s priorities and initiatives. NATO Summits are the defense equivalent of a red carpet event.

The Warsaw Summit was an especially important occasion for NATO as it was meant to articulate a clear strategy in response to Russia’s increasingly provocative actions. At the same time, NATO Summits are also meant to reiterate ongoing commitments and existing policies. This is a very public international forum, as thousands of media outlets are represented at the Summit and NATO itself engages in intense public diplomacy efforts through social media, its website and public appearances by the Secretary General and NATO leaders. Amidst the media frenzy, it is worth asking 1) what are some of the Summit’s core messages; and 2) who are the targeted audiences?

The first priority of the Summit was for NATO to communicate a stronger deterrence posture, which is now more explicitly aimed at Russia. The annexation of Crimea in 2014 marked a turning point as NATO allies on the Eastern flank, especially the Baltic States and Poland became increasingly worried about an eventual military confrontation with Russia. Already at the 2014 Wales Summit, NATO nations agreed on strong language, which condemned Russia’s actions in Crimea and Eastern Ukraine. The 2016 Summit in Warsaw needed to convey that the concerns expressed in the 2014 Communiqué had now been translated into action. The major announcement of the Summit, therefore, was the decision to deploy four battalions in Estonia, Lithuania, Latvia and Poland, for a total of about 4,000 troops. This “forward presence,” as it is referred, to will serve as a tripwire in case of a Russian incursion. Their very presence, however, is meant to deter Moscow from even considering a military conflict with the Baltics or any NATO member states on the Eastern frontier.

This is a very public international forum, as thousands of media outlets are represented at the Summit and NATO itself engages in intense public diplomacy efforts through social media, its website and public appearances by the Secretary General and NATO leaders. Amidst the media frenzy, it is worth asking 1) what are some of the Summit’s core messages; and 2) who are the targeted audiences?

This decision resonated with NATO publics in countries that pledged troops to this effort, especially the four framework nations that will lead the battalions: Canada, Germany, the United Kingdom and the United States. More importantly, however, the announcement of a NATO forward presence was intended to reassure member states that feel threatened by Russia. It is a physical and visible assurance measure that is pledged publically and that signifies a tangible commitment on the part of the Alliance. Therefore, it has been central to NATO’s strategic communication efforts. Finally, the decision sent a strong signal to Russia, as it articulated that the conditions for NATO-Russia cooperation had disappeared.

A second priority for NATO was to reiterate its commitment to Afghanistan. Immediately after September 11, 2001, NATO invoked Article V in support of the United States, triggering the Alliance’s mutual defense clause. Since then, NATO has worked to ensure Afghanistan would never again be a safe haven for terrorist organizations like Al Qaeda. Sustainable progress in Afghanistan has been tenuous, despite sustained NATO involvement. The Summit led to a special declaration on Afghanistan to extend NATO’s commitment in the context of Resolute Support, a mission that is primarily focused on military training and assistance. Through this declaration, NATO member states are agreeing to stay in Afghanistan beyond 2016, even bolstering the military and financial contributions and essentially slowing the military drawdown. For the United States, this is not the first time that the timeline of the drawdown is adjusted because of concerns over the unstable security situation in the country. The Obama administration remembers the painful lesson of Iraq, where a premature drawdown, combined with political instability, facilitated the rise of the Islamic State. The Warsaw Summit, therefore, allowed NATO leaders and Afghan President Ashraf Ghani to present a common front, signalling to the Afghan people that they would not be ignored because NATO is facing more pressing concerns with Russia, as well as on its Southern flank, with the Syrian civil war, the presence of IS in Syria, Iraq and Libya. Despite the high-level attention accorded to Afghanistan, however, it is clear that it is no longer the central issue it once was for the Alliance.

Beyond the announcements above, which were primarily aimed at domestic audiences in NATO’s member states, Russia and Afghanistan, the Alliance included usual statements about partners, its core principles and policies as well as the state of its military capabilities and overall readiness. Overall, the list of issues included in the Summit Communiqué is sufficiently complex and jargon-laden that the average person will not be tempted to read all 139 paragraphs. Nevertheless, the core messages permeated the international public realm and reached their intended audiences.

Ultimately, the Warsaw Summit aimed to promote alliance cohesion, deter Russia and manage security threats beyond NATO’s borders. To achieve this in a credible way, the Secretary General, Jens Stoltenberg, also had to remind everyone that the pursuit of these goals can only be sustained by increasing the alliance’s capabilities, meaning allies must increase their defense budgets. Therefore, some subtle public shaming could also be detected amidst the highly mediatized bursts of public diplomacy meant to reinforce NATO’s core messages.

Stéfanie von Hlatky
Past Visiting Scholar
Assistant Professor of Political Studies, Queen’s University
YOU MIGHT BE INTERESTED IN...