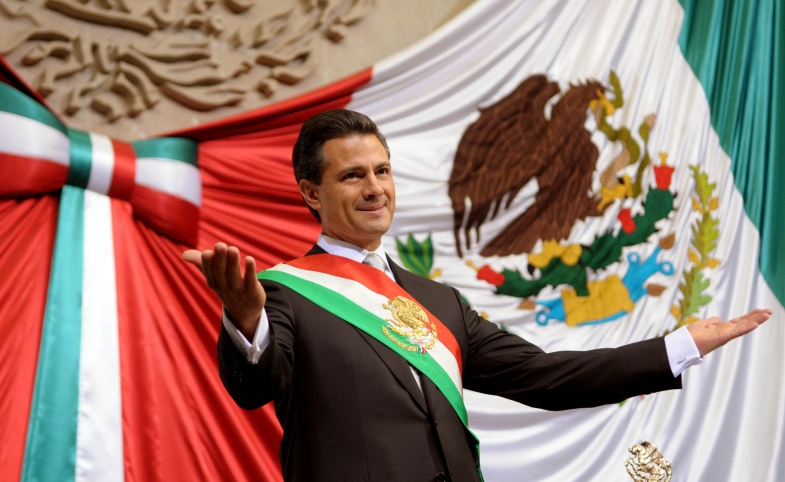 However, the president’s massive propaganda campaign to legitimize his renovated political party–the Institutional Revolutionary Party, or PRI–has only proven to be a disguise of the PRI’s unseemly past. Mexicans and outsiders have witnessed a less stable economy, an ineffective foreign policy, an increase in human rights violations, and visible corruption at the highest level. Am I being too harsh on the government? Maybe, but can you blame me?

An Economy Without Credibility

For the past several years, Mexico’s main international credentials were its strong macroeconomic foundations, steady growth, stable finances, and its inclusion in the biggest global trade agreement: NAFTA. After the 2008 financial crisis, Mexico’s economy recovered quickly compared to other major economies. It recorded 5.5 percent GDP growth in 2010 and 3.9 percent in 2011. Trade between the United States and Mexico escalated to levels never seen before; more than $583.5 billion was exchanged in 2015 between the two economies. In addition, major multinationals wanted to be integrated into the NAFTA market through the Mexican supply chain, increasing the flow of foreign investment.

The Mexican economy is losing its credibility in foreign markets. Recognized by international investors for its solid financial stance, the new administration has increased the debt-to-GDP ratio to 50 percent, a level that has begun to raise concerns in capital markets. As a result, credit ratings agencies have revised Mexico’s outlook from stable to negative, though it still remains investment-grade for the time being.

In addition, the Mexican peso is having a rough year. The most traded currency among emerging markets has posted it's worst performance over the last few months, and has lost about a third of its value in the past two years. Currency volatility might be due to various factors, many of them external, and it is not necessarily an exact reflection of an economy. However, the psychological impact of surpassing the 20 pesos to the dollar barrier is a significant burden that affects how Mexicans look at their country and its image.

In order to assuage Mexico’s position with the already nervous markets, former Secretary of Finance Luis Videgaray, decided to invite the Republican candidate to meet the Mexican president in light of a potential victory in November. The meeting infuriated the Mexican population, baffled by the invitation of a man who referred to them as “rapists” and “murderers” to their country. Trump’s visit resulted in humiliation for the Mexican government and severely damaged Mexico’s relationship with the White House. Several newspapers have reported that President Peña Nieto has tried three times, with no luck, to apologize to President Obama. Rumors also claim that Secretary of Foreign Affairs Ruiz Massieu has moved heaven and earth to meet candidate Clinton to justify her boss’s motives. But Mrs. Clinton is apparently adamant not to meet with the Mexican administration. If she turns out to be next president, the binational relationship will already have a bumpy beginning.

Meanwhile, Peña Nieto’s response to Trump’s vicious accusations has been practically silent. The current administration has not been sufficiently vocal when it comes to defending the 30 million Mexicans living in the U.S. The lack of a counter-narrative strategy has only allowed Donald Trump’s allegations to disseminate further and solidify among American voters. A similar analysis can be made regarding issues surrounding NAFTA.

Acting Out as a Banana Republic

Much speculation has been going around regarding when Mexico will evolve into a developed country. Even Jim O’Neil, former economist at Goldam Sachs responsible for coining the BRICS acronym, added a new set of countries that will become leading economies of the future: MINT (Mexico, Indonesia, Nigeria, and Turkey).

However, the Administration has been plagued by embarrassing scandals, displaying the image of a banana republic. Allegations of top officials’ behavior have not promoted a reputation of a modern and accountable government, to say the least.

Mexico has completely lost its mojo due to an improper administration, plagued by scandals.

The Mexican government, at both the mid-range and highest levels, has been involved in several cases of corruption. President Peña Nieto and his wife were implicated on “conflict of interest” charges concerning a luxurious $7-million-dollar house and government contractor. The scandal was immediately picked up by the international media, with damning headlines such as “Luxurious Presidential House Draws Mexican Press Scrutiny” (Washington Post), or “Report: Rail Contractor Owns Mexican Leader's Home” (AP). It only took President Peña Nieto two years to admit his guilt and ask for forgiveness.

To add to the pile of embarrassing moments, the escape of “El Chapo” Guzman, the world’s most powerful drug lord, from a maximum security prison further evidenced Mexico’s corruption, criminal impunity and weak institutions. El Chapo’s second escape from prison, as full of Hollywood intrigue as it was high-profile, was a blow to the nation’s image and the government’s credibility in battling organized crime.

There are other factors and terrible events—such as the 43 missing students of Ayotzinapa, human rights violations, and mistreatment of migrants from Central America—that have been hurtful to Mexico’s reputation.

On the other hand, Mexico has many positive elements: a vast history and culture, a renowned gastronomic scene, strong biodiversity, and healthy tourism. Therefore, the government has the means and tools to change negative perceptions. It starts at the highest level, as nation-branding is usually a top-down strategy, meaning that the leaders carry the burden of showing their country’s best. And Peña Nieto’s administration has failed to do so.

Sergio de la Calle
Contributing Researcher, Journalism with Purpose
Candidate, USC Master of Public Diplomacy
YOU MIGHT BE INTERESTED IN...

The most attractive piece of America’s public diplomacy toolkit was once the United States itself. The American dream—in all of its fallibility—still piqued the imaginations of millions around the world. Our democratic...