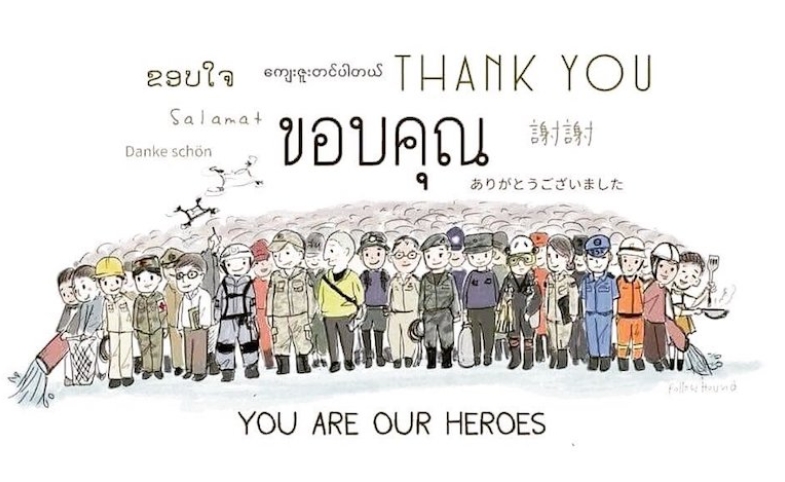 Thailand made headlines around the world between June and July 2018.

The story came about when the 12 young footballers together with their coach stepped into the cave called Tham Luang Nang Non, located in the northernmost province of Thailand, on June 23. Due to a sudden escalation of strong currents, the group became trapped. The 18-day operation of the Tham Luang Cave Rescue was an intriguing mission not only for Thai public but also for the foreign public. The operation mobilized thousands of on-site operators, rescuers, volunteers and officials from Thailand and its friends from around the world. The mission was completed when the last five victims were extricated on July 10.

Reflecting on the Tham Luang Cave Rescue, this article takes a look at the implications of this rescue by emphasizing two aspects:

Some of the negative pieces of Thailand’s global image, which include political uncertainty, bad traffic in the capital and reputation as a famous sex tourism destination, have long overshadowed positive parts of its natural scenery, cultural attraction and magnificent hospitality. The Royal Thai Government has worked on a branding strategy of the country in an attempt to enhance the positive aspects, such as “Amazing Thailand” that positions the country as a world-class and charming destination for foreign visitors.

The world came together for this impossible mission, and everyone amazingly rejoiced when the mission succeeded. The current orientation of public diplomacy arguably aims toward state cooperation with non-state actors and the development of relationships between the state and non-governmental participants.

It is generally accepted that media coverage shapes and influences images of countries, and that negative qualities of countries tend to be more newsworthy. Thus, media often emphasizes negative aspects of a country and acts indifferently toward positive associations.

As reflected in the past media coverage, Thailand is known for a spotty safety record and problematic crisis management. Yet, during the rescue operation of Tham Luang Cave Rescue, over 1,000 journalists, including those from reputable international media outlets such as CNN, BBC, The Guardian, Channel News Asia and Al Jazeera, published and narrated the stories about the Thai Cave Rescue in a favorable way for Thailand. Although Tham Luang Cave Rescue might not entirely transform the national image of Thailand, it enhanced a positive profile of the country.

Through the news coverage, the world witnessed one of the perfect cases of leadership responsibility that encompasses decisiveness and discipline. The stories also touched upon the elements of courage, cooperation, strategy and sacrifice which were rarely connected to the image of Thailand prior to the event. The image framing projected Thailand as playing an intellectual leading role in multilateral cooperation, an image that Thailand has long aspired to. This national image was echoed by the congratulatory messages from world leaders like U.S. President Donald Trump, former UK Prime Minister Theresa May, South Korea’s President Moon Jae-in and Singapore’s Prime Minister Lee Hsien-Loong. The messages praised the 12 footballers, coach and others involved for their universally admired attributes, which included prowess, strength of will and perseverance.

This crisis was unpredictable and undesirable. However, an ability to manage a crisis and turn it into an opportunity showed a sophistication of the country’s diplomacy. Thailand, with assistance from media, was able to cultivate the attention of multiple audiences amid this crisis and project a better national image to the world. Apart from that, Thailand’s image in pop culture has charmed audiences worldwide. The footballers and their coach acted as Thai cultural ambassadors when they appeared on The Ellen DeGeneres Show in the U.S. Film studios like Universal Pictures, De Warrenne Pictures and Pure Flix Entertainment were eager to make a film about this incredible rescue. Netflix also announced on producing original scripted series about the rescue.

“Where are you from?” One of the missing boys asked

“England, UK,” said one of the divers.

A miracle has taken place in “Amazing Thailand” where extraordinary global cooperation makes anything possible. The world came together for this impossible mission, and everyone amazingly rejoiced when the mission succeeded. The current orientation of public diplomacy arguably aims toward state cooperation with non-state actors and the development of relationships between the state and non-governmental participants.

“Anyone can be an actor” is a strong characteristic of public diplomacy in this era. Non-state actors have the benefit of creating trust since the state diplomats have always faced challenges in building relationships based on trust. Two British divers, Richard Stanton and John Volanthen, who assisted in this rescue mission, were a good example of non-state actor engagement in public diplomacy. Stanton and Volanthen embodied credibility as experienced divers and neutrality as non-state agents, so Thailand happily welcomed them. Although these two divers might not intentionally practice public diplomacy for their country, they were inadvertently instrumental to public diplomacy ends of the United Kingdom and the general Western world. Elon Musk, a world-renowned tech entrepreneur based in the U.S., also attempted to assist in the rescue operation with his technical solutions. Even though the rescue team decided not to use his equipment, his presence was noted, and his aid is also a story of public diplomacy.

Other than assistance from the actors who did not have a direct tie to state governments, international support directly from the foreign states also played a role throughout the rescue operation. This included a medical team from Australia, irrigation specialists from Japan, manpower from the U.S. military and logistic teams from China. The countries understood that the Thai public, as well as the global public, paid close attention to see which country helps others in a time of crisis and, naturally, Thais had better sentiment towards the countries that came to back the rescue after the mission. The above picture, noting “thank you” words in different languages, had been shared widely in Twitter. Their assistance made them relevant to Thai public and provided benefits in terms of public diplomacy for the countries.

Not only did the Tham Luang Cave Rescue test Thailand’s mettle in coping with the crisis, but it also fostered Thailand’s favorable views toward international actors. What could have been an entirely tragic occurrence turned into a story that praised the greatness of responders who came to Thailand—the place where a miracle happened.

Thank you very much :)