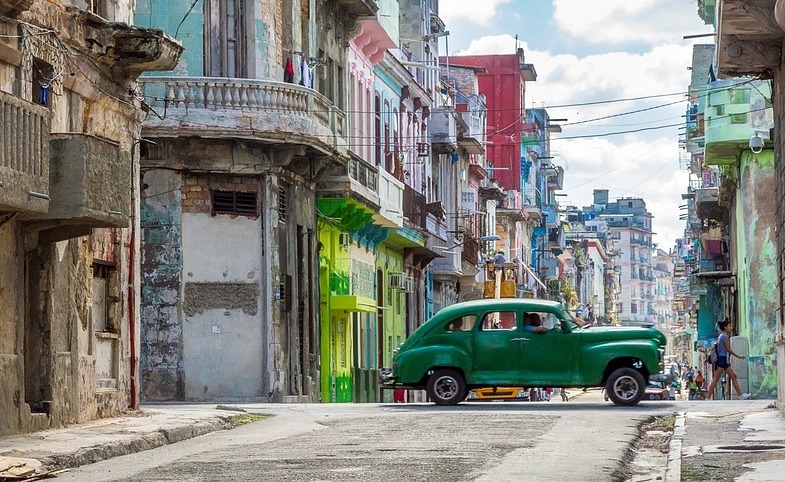 Russia worked to take down Hillary Clinton in 2016, but it may have been Cuba that delivered Donald Trump the White House.

Cuba brought the world Trump? It’s hard to imagine Cuba had anything to do with the 2016 U.S. presidential election. Contemporary America seems so far away for anyone sitting on a Havana tourist rooftop overlooking renovations of its Capitol, listening to the street sounds of rhythmic music, or watching lumbering ’50s Chevys cruise down seaside boulevards.

This beautiful island nation struggles with basic goods, has no easily available internet, and could use a lot of plaster and a good paint job. The furthest thing from this news-controlled, social-media-free, communist-rundown country is the sense that it plays any geopolitical role.

Cuba had been the thorn in America’s side for over half a century, with no end in sight. I advocated for an opening to Cuba in these pages in February 2014, months before it became official U.S. policy. President Barack Obama’s dramatic policy move to start normalizing relations with Cuba later took many by surprise.

Once Obama’s opening began, it was welcomed in foreign policy and business circles, but it antagonized Cuban American voters. These voters concentrated in the must-win swing state of Florida swung toward Trump on Nov. 8. In an election won by Electoral College math, Florida turned out to be a must-win state for Clinton.

Cuban American voters, unlike other Florida Latinos, showed a clear preference for the candidate promising a better deal from Raul Castro. Since the president’s inauguration, the White House says it is conducting a “full review” of U.S.-Cuba policy.

Standing in downtown Havana, not far from the broad, five-mile long breakwater esplanade Malecón and feeling the placid breezes, it is hard to believe that Cuba has yet again been a catalyst for an American political tsunami felt around the world. To say that Cuba consistently punches above its weight is an understatement.

Two centuries ago, where the picturesque Malecón ends and inside Havana’s natural harbor, the USS Maine blew up. That event catalyzed the Spanish-American War and brought Teddy Roosevelt and his Rough Riders to Cuba. Victories over colonial Spain in Cuba and the Philippines marked America’s stepping onto the world stage.

Cuba continued to define America’s global engagement. Shortly after John F. Kennedy’s rise to commander-in-chief, he was tested by Fidel Castro’s invitation to the Soviet military’s hardware, causing the Cuban missile crisis and bringing the world to the brink of nuclear annihilation.

Yet again, in 1980, President Jimmy Carter and Arkansas Gov. Bill Clinton simultaneously suffered devastating political losses after Castro’s targeting of 125,000 Cuban refugees at U.S. shores in the “Mariel boatlift.” Americans opposed the refugee policy and Ronald Reagan’s anti-Castro stance was both burnished and supported at the polls.

Time after time, Cuba is the fly in America’s political ointment.

Any effect Cuba had in bringing Trump to power means they helped elevate a president who declared to a joint session of Congress that his “job is not to represent the world.”

Today, the Havana harbor where the USS Maine sank is welcoming cruise ships with American tourists hopping off to down a mojito and watch a hypnotic pachanga dance. The Cuban missile crisis is recalled by fragments of the downed American U2 aircraft exhibited at Cuba’s Museum of the Revolution. And the waves of Cuban refugees given political asylum in the United States? Many now vote in presidential elections; many chose candidate Trump.

Cuba’s history with the United States may not be commonly known, but for some bygones are not always bygones. Cuba still has an effect.

Regardless of how Cuba has affected America’s world, the rest of the world seems to have effectively been shut out of Cuba … or preserved in amber, locked into a 1950s- and ’60s-look-and-feel reality that allows the pace of life to move more slowly. Since Fidel Castro’s passing, there seems to be less “oomph” and fewer calls for a permanent revolution, more fading and sun-bleached posters declaring America as an aggressive imperialist nation.

My last visit was during the mid-’90s, during the “special period” after Russia cut its subsidies – a staple of the Soviet-Cuba alliance – and America’s embargo on the island nation was really starting to hurt. Food, fuel and freedom were hard to come by. Cubans talk about the “special period” today and say that it is difficult for their children to understand how hard it really was – that today’s generation of Cubans do not really know how good they have it. Especially with the trade thaw and promise brought by the Obama overture.

An undercurrent of creative energy has been unleashed in this slowly changing environment, where a common expectation of hope and change is in the Cuban air. Restaurant cooperatives are opening and expanding – even as the buildings they occupy continue to crumble. Small private enterprises are being tested in the shadows – but not marketed for fear of being shut down. Artists are exploring expressive boundaries and international markets – but not directly challenging domestic political leaders or structures. Patience and anxiety are the conflicting attributes that characterize this transitional moment. Visitors to Cuba are witnessing a nation on the verge of social, commercial and political change. Where that change leads is uncertain, but watching while it happens is fascinating.

What is certain is America will have an effect on that change. What the Trump administration does about Cuba will be crucial to the island’s political and economic future, especially following Raul Castro’s planned resignation next year. Trump will be America’s first president since Fidel’s revolution with a post-Castro Cuba next door. But just as America shapes Cuba, the reverse has also proved true.

America first looked expansively beyond her shores in 1898 because of a “splendid little war” in Cuba. It was a watershed moment that opened the world to American leadership and hegemony.

In 2017, Cuba may have played a part in marking America’s new era of retreat from leadership in world affairs. Any effect Cuba had in bringing Trump to power means they helped elevate a president who declared to a joint session of Congress that his “job is not to represent the world.” That is a significant statement.

While literally true, for at least a century the decided role of the U.S. president has been to represent global freedom and democracy as well as the aspirations, hopes and dreams of those around the world “yearning to breathe free.”

During that time, America has long been engaged in globally pursuing both her interests and values. This is now the transactional Trump era, where American society values only her commercial and security interests. A good number of Americans welcome this shift, a fair number of global citizens fear it. Vladimir Putin’s Russia counts on it.

Note from the CPD Blog Manager: This post originally appeared in the Sacramento Bee.

Photo by Tpsdave I CC 0