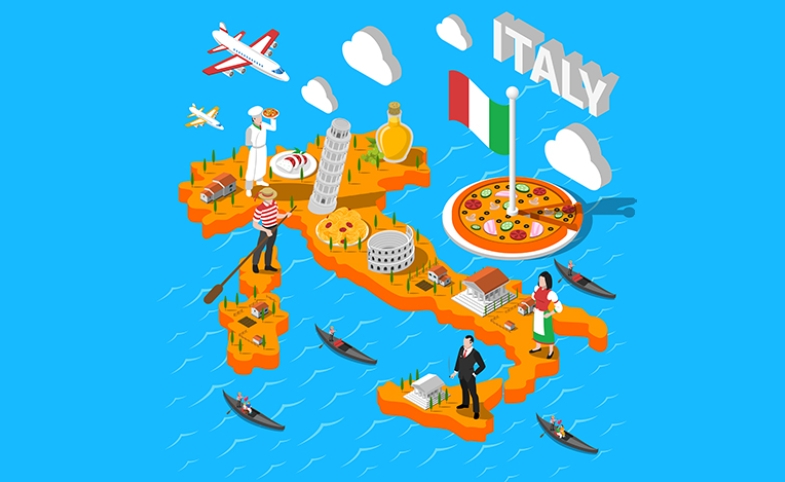 At the beginning of January this year, Italy’s foreign ministry launched a new internal structure: the Directorate for Culture and Public Diplomacy.

[The structure] has been created with the purpose of rendering “Italian soft power” [sic] a tool that can be used for constructing influence and global consensus on themes that our country considers to be priorities. With its key pillars—communication, cultural diplomacy, strategic programming and [an enhanced] presence in international organizations—the new Directorate will build upon an enduring dialogue with the media, think tanks, universities and international organizations, with the aim of promoting Italy and developing a more modern narrative about Italy, in line with our role in the world, and integrated with the productive and cultural forces of this country.

In an interview with ANSA, Italy's leading wire service, Italian Ambassador Terracciano and head of the Directorate suggested that official cultural communication had hitherto been a sort of "Cinderella" compared to the ministry’s formal diplomacy, and the time had come to raise its profile at home and abroad. Terracciano said the Directive's aim should be to leverage the country’s well-known cultural resources in new ways, to create a more up-to-date story, fight stereotypes, increase the non-tangible influence of Italy and in this way “better promote our national interests.” Six new cultural institutes will be added to the 84 already present, plus 13 “antennas” in cities where there was no space for an institute. The Ambassador concluded that interdependence is increasing all the time, and with it the awareness that the problems and cultural challenges arising from other peoples are becoming more and more present in the lives of Italians. It is up to the new structure to ensure that Italy’s concerns are equally present in the consciousness of others and in international organizations in particular.

So officially, Rome embraces the formula of soft power and the politics of identity. At a time when Google claims to list about 2.55 billion general references to the phrase "soft power," and Google Scholar cites about 3.66 million academic articles referencing the term (as of January 17, 2022), and when all major states and many minor ones have developed some form of strategy to express their own idea of what it means for them, Italy would not want to be left out. This reflects the fact that the game of intangible power is becoming ever more competitive and visible. While the projection of hard power—military, political, economic—is ever more costly and ever less credible for all but a tiny handful of ‘big stick’ powers, the rest are all searching for ways to enhance their own influence, if only to increase exports, attract more tourists and foreign direct investment, and generally assert their interests.

Enduring soft power success comes from a society’s ability to express its own distinctive and enduring synthesis of tradition and modernity.

The most obvious way this process is currently developing is by way of a new and more self-conscious round of nation branding. On channels such as BBC World, one can see ads for everywhere from Morocco to Senegal, from Singapore to the Wallonia region of Belgium. The latter has even put out a statement of what it means by its branding exercise. Italy, a land whose people have always been intensely aware of the impression they want to make on others, could not miss out on this trend. The ministry’s effort is titled "Italy is simply extraordinary" and can be found online in English.

With the benefit of years of experience, we can now see that the concept of soft power is the latter-day successor to the age-old notion of “prestige,” which meant—according to the original international relations theorist E. H. Carr in the 1930s—the ability of states to reach their objectives in foreign policy without the use of material pressures, of force. Today, unlike their historical predecessors, states don’t leave their prestige to chance. They use all the means made available by the digital revolution of the last 30 years to raise their profile and assert presence on the international stage.

Essentially their claim on our attention is based on the force of their example, or to put it in the words of Cambridge international relations experts Christopher Hill and Sarah Beadle (“The Art of Attraction,“ p. 7), the “power of attraction,” in which the attraction derives not from events such as sporting successes (e.g., at the Olympics) nor a unique cultural achievement (e.g., an Oscar) nor its intellectual equivalent (e.g., a Nobel Prize). Instead, write Hill and Beadle, it’s the lasting achievements over time of its civil society that make the difference: "Governments would be well advised to recognise that the key quality of soft power is its primary location in civil society. Soft power begins at home, as reputation and trust are both intimately linked to the nature of domestic achievements."

So while Italy has been named 2021 "country of the year" by The Economist, thanks to its current political leadership, its resilience in the pandemic, and its sporting and creative cultural successes in 2021, if there’s one truth that the country teaches, it is that enduring soft power success comes from a society’s ability to express its own distinctive and enduring synthesis of tradition and modernity. While Italy's new Directorate has committed itself to enhance the global presence of the nation’s cultural resources as a whole, it’s in the field of gastronomy above all that Italy, including its diplomatic network, has best demonstrated the intangible creative potential of this country.

The world presence of Italian cuisine has created stories, indicated new standards and given prominence to personalities that nations everywhere have wished to emulate—in restaurants, on TV, on social media and in the home. These days, the competition between gastronomic cultures demands the presence of experiences that offer both authenticity and accessibility or evoke places and traditions that are specific and exotic. In Italy, from the great food brands such as Barilla and Ferrero, including the numberless food fairs up and down the country, down to the newest pizzeria in a town center, the message is always the same: we combine tradition and innovation, or as the Italian multinational food company Barilla website puts it: "Our past is our future."

It’s up to Italy's foreign ministry now to give lasting expression to the challenge implicit in this concept and the realities that express it.