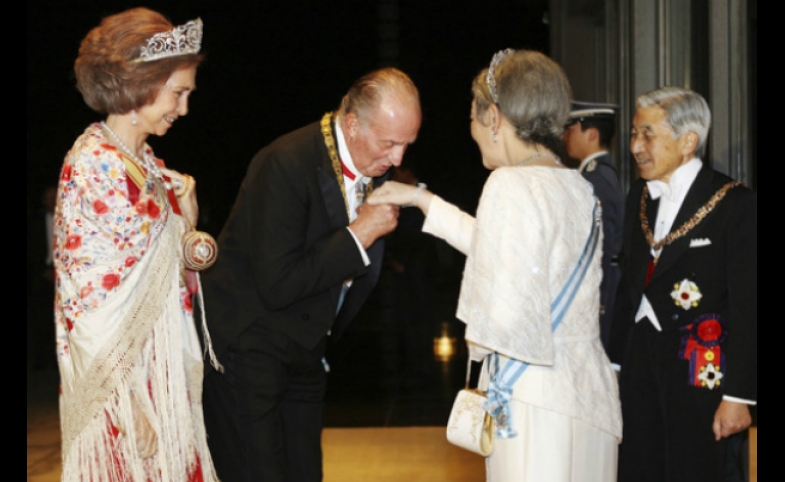 The pending abdication of King Juan Carlos I offers, among other things, an occasion to reflect on the Spanish monarch’s significant contribution to Spain’s soft power, both during the Franco era and in the subsequent period of democratization that he helped to usher in. Current news coverage duly notes Juan Carlos’ pivotal role in encouraging and preserving Spanish democracy in the years following the death of the geriatric dictator Francisco Franco in 1975. But the King is perceived in some quarters within and without Spain as tainted goods: a high-living hunter of Botswanan elephants in the midst of a national economic downturn, a less than uxorious royal spouse, saddled with a Marie Antoinette-esque daughter and larcenous son-in-law.

This frankly all seems a bit churlish, given the remarkable restraint—indeed, singular aptitude for subterfuge—Juan Carlos displayed as a prince. Franco carefully groomed him from the age of ten through adulthood as his successor, to the point of his publicly lauding the Nationalist (far-right) victory in the Spanish Civil War and pledging to uphold its authoritarian principles when in 1969 he accepted Franco’s succession offer.

In reality, nothing could have been further from the truth. Juan Carlos, who as prince met several times with democratic opposition figures sub rosa, used the throne after Franco died to aid Spain’s transition from dictatorship to democracy, rejecting caudillismo in favor of the model of other Western constitutional monarchies. He stood fast as rightist revanchists made several coup attempts, including the notorious 1981 “23-F” plot that British Prime Minister Margaret Thatcher denounced as a “terrorist act” and which, if it had succeeded, would doubtless have scuppered Spain’s efforts to join the EEC, the EU’s predecessor.

Juan Carlos, whose televised address in the midst of the 23-F coup ordering Spanish soldiers to remain in their barracks was replayed internationally, including in the U.S., became the embodiment of Spanish determination not to slip backwards toward quasi-fascist Franquismo. As such, his image was of a piece with such symbols of post-Franco Spain’s democratization and overall progress as artist Joan Miró’s famous Sol tourism graphic. The Spanish King was, in short, an avatar of post-Franco Spanish soft power, showing America and the world at large the attractive, indeed heroic, face of the new Spain.

But Juan Carlos’ contribution to Spain’s soft power did not begin with the country’s democratic transition. As I describe in my recently published book, Franco Sells Spain to America: Hollywood, Tourism and Public Relations as Postwar Spanish Soft Power, Francisco Franco and his minions worked assiduously in the quarter century following World War II to restore the dictatorship’s tattered reputation in the United States. The handsome and glamorous young Prince of Asturias Juan Carlos played a significant supporting role in that effort. For example, when the 20-year-old Principe paid a high-profile visit to Spain’s exhibition at the 1958 New York World’s Trade Fair, a major international commercial exposition, the New York Times described him as “tall, blond and charming” and “a human magnet” who attracted a swarm of women who swooned over him (one gushed, “Isn’t he cute?” while another pronounced him “stunning,” and a third asked “Is he single?”).

When Juan Carlos married Princess Sophia in 1962, the Times in its extensive coverage pronounced the lavish nuptials “a fairy story”—a phrase that especially resonated in an America where Camelot was currently a hit Broadway musical—and began its front-page article, “Once upon a time, a blue-eyed princess of Greece was married to a six-foot blond, curly-haired Spanish prince.” Indeed, the honeymooning royal couple spent two weeks in the United States, perpetually shadowed by reporters as they visited Cape Canaveral, New York (where among other activities Princess Sophia presented a trophy at the Aqueduct horse-racing track), and the White House for a meeting with another Camelot-tinged personage, President John F. Kennedy.

Other examples, widely covered in U.S. media, include Juan Carlos presiding in 1966 over the opening ceremonies at the 17th annual International Astronautical Congress in Madrid, whose setting was a coup for the Franco regime in its efforts to portray itself as an integral partner of the U.S. space program; the Prince and his family photographed arriving in New York late that same year for a multi-month stay in Manhattan; and a glowing 1968 New York Times profile of Juan Carlos that described him as both a man of learning—“In college he excelled in mathematics, physics, chemistry and economics”—and action—“He has often been photographed practicing karate, whacking a board in two with a bare hand.” And although he was seen as something of a political cipher when Francisco Franco announced in 1969 that he would be El Caudillo’s eventual successor, the Times’ Madrid correspondent recounted in detail his educational success and advanced military training, his service in multiple ministries and extensive international travel, his strong work ethic and, as always, his attractiveness: “He stands tall and erect at 6 feet and 2 inches and is handsomely blond.”

Juan Carlos served as an exemplar of the Franco regime’s sophisticated ongoing program to portray to Americans a Spain that, while under authoritarian rule, was nonetheless Western-oriented, outward-looking, modern, vibrant, prosperous and glamorous—all of which it increasingly became during the early postwar era, especially the 1960s. What Spain was not, and what Franco emphatically did not want Spain to be, was a democracy.

El Caudillo felt confident, in appointing the Prince of Asturias as the next Chief of State, that he had successfully groomed a kindred spirit who would anchor Spanish dictatorship after his death—but the Prince, once King, proved him wrong. It is a delicious irony that Juan Carlos, whose charisma and glamor were repeatedly utilized as a soft power asset by the Franco regime in its search for American approval, became a key player in ending Franquismo, and a heroic personification of the new, democratic Spain.

Global mobility is an important issue for all countries and multinational corporations. The ability to move employees easily has never been more important. Extending the influence of soft power beyond governments and into...