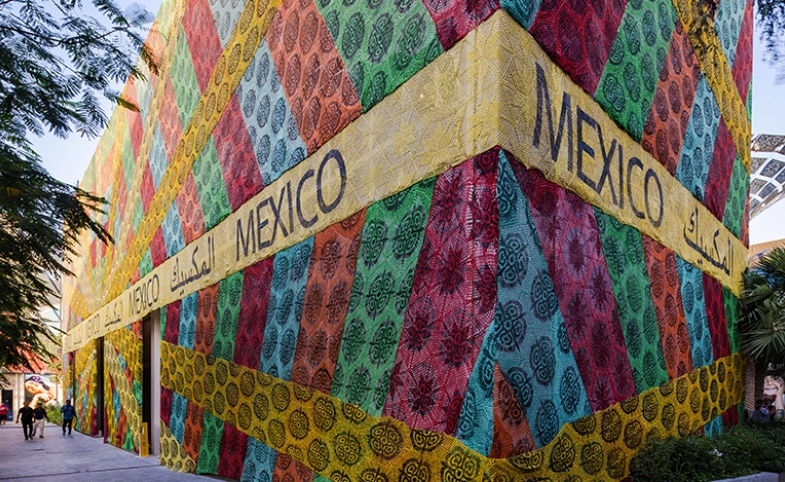 Mexico’s participation at Expo 2020 Dubai has been active in terms of public diplomacy. Mexico’s pavilion immensely displayed its culture, folklore and touristic destinations that are hallmarks of the country. Mexico’s pavilion, called Weaving Life Pavilion, had a seven-kilometer façade of intertwined raffia containing Mexican cultural symbols, totally handcrafted by Mexican women from Etzatlán, Jalisco. Mexico’s investment in its pavilion is also worthy of mentioning because of its scare budget, eight million USD, compared to other countries that invested way more in their pavilions, such as the United Kingdom's 57 million USD, Germany's 54 million USD, France's 36 million USD and New Zealand's 43 million USD. For Mexico, this investment meant an opportunity to promote culture, tourism and businesses in not only a distant country, but in a region that is far away from home and has a different culture. It also meant fostering diplomatic relations with a country that represents business opportunities beyond traditional markets.

The Weaving Life Pavilion presented part of Mexico’s vast culture, tourism and gastronomy. It was surrounded by cultural icons, which were reinforced by screenings of important touristic destinations in Mexico, pyramids and handcrafts. To promote culture more, Mexico implemented an attractive cultural program, presenting prestigious artists and singers such as Lila Downs, Tania Libertad and folkloric ballet by Amalia Hernández. Along with these performers, other cultural expressions were presented, including a Mexican popular art exhibit, visual art expositions, Mexican writers’ presentations, concerts, film screenings, gastronomic shows and fashion designer showcases. For the purpose of projecting Mexican culture and travel destinations, the Mexican pavilion functioned as a beacon of culture, traditions and imagery. It helped place Mexico’s culture in the minds of Middle East visitors who previously didn’t know about Mexico or had a negative impression of the country. On social networking platforms, visitors stated they were impressed by the immense culture of the country.

Regarding business promotion, Mexico organized a business program including fora and seminars to link Mexican businesspeople with investors from other countries. It created a business center and collaborated with 80 business centers from other countries, and it involved representatives from associations, private entities and academia. One of the main goals of this business center was to find more markets for Mexican products and position Mexico as a significant producer of textiles, fashion, alcoholic beverages, goods and tourism. Additionally, in collaboration with the Ajman Chamber of Commerce and the Lebanon Pavilion, companies and industry representatives from the countries involved were introduced to explore possible cooperation and partnerships, open new markets to participants and network. Mexico’s business center is an exemplar of public diplomacy activities whereby state representatives, companies, enterprises and organizations from Mexico interacted and exchanged ideas and business opportunities with state and business representatives from the host country in order to strengthen relationships.

All these exhibitions, fora, encounters, networking, sessions, seminars, shows, performances and symbols are instruments of public diplomacy that Mexico’s team implemented in order to win the hearts and minds of the different publics visiting Expo 2020 Dubai.

For the purpose of diplomacy, Expo 2020 Dubai also meant fostering relations with the United Arab Emirates (UAE) and other countries participating in the Expo. Mexico’s pavilion received different state representatives, including HH Sheikh Mohammed bin Rashid Al Maktoum, Vice President, Prime Minister and Ruler of Dubai; Rita Bissoonauth, Head of Mission of the African Union; and Paolo Glisenti, Expo Commissioner-General from Italy. Additionally, Mexico sent the Cuauhtémoc sail training ship, which is a training ship from the Mexican Navy, to celebrate the day of Mexico at Expo 2020 Dubai, symbolizing cooperation, security and fraternity between Mexico and the host country. Expo 2020 Dubai was also an opportunity to position and confirm Mexico as a strategic partner for the UAE and advance toward entering a big market. According to Mexico’s Secretariat of Foreign Affairs transparency website, the pavilion had more than 350,000 visitors and positioned Mexico as a strategic partner in the MEASA region. The UAE’s government and investors’ interests in Mexico are its strategic geographic location in North America and its diverse free trade agreements, which can be advantageous for doing business. For Mexico, a closer relationship means an opportunity to diversify commercial destinations, attract foreign direct investment and generate more opportunities for tourism.

Moreover, at Expo 2020 Dubai a variety of instruments of public diplomacy were implemented by the host country and the Bureau International des Expositions (BIE) as well. For example, the UAE Innovates Awards acknowledged impressive innovations regarding Opportunity, Mobility and Sustainability to the pavilions presented at Expo 2020 Dubai. The Best Innovation that Creates Opportunity Award was given to the Czech Republic’s pavilion for the S.A.W.E.R. water production system that consisted of collecting moisture from the environment and turning it into disposable water to spring the garden’s pavilion. This was an amazing innovation from the Czech Republic that allowed participants to appreciate a direct application of technology. Also, the BIE Prizes and Awards at Expo 2020 Dubai recognized three main aspects of pavilions, including categories such as architecture and landscape, exhibition design and theme interpretation. Mexico received a Gold Award for Exhibition Design, which acknowledges the ingenuity and creativity of the creators of the pavilion. This can be considered a sign of the success of Mexico’s investment of time, effort and resources toward Expo 2020 Dubai.

All these exhibitions, fora, encounters, networking, sessions, seminars, shows, performances and symbols are instruments of public diplomacy that Mexico’s team implemented in order to win the hearts and minds of the different publics visiting Expo 2020 Dubai. Not only civilian visitors were addressed, but also investors, companies and government representatives were reached using public diplomacy. Expo 2020 Dubai was filled with plenty of public diplomacy activities that brought closer state and non-state actors in a region that previously was disregarded.

Finally, Mexico’s participation at Expo 2020 Dubai reinforces the foreign policy approach of the López Obrador administration. Mexico’s current foreign policy has a vision of transparency, humanism and effectiveness, with an inclusive and feminist approach, and a focus on cultural promotion. In this sense, the Weaving Life Pavilion, apart from exercising inclusiveness and feminism by including women in the construction of the façade, was effective in using a moderate budget for promoting Mexicanness and was transparent by establishing a transparency website. Moreover, Mexico’s participation at Expo 2020 Dubai was a vigorous instrument not only for public diplomacy and cultural diplomacy, but also for advancing foreign policy goals oriented toward strengthening partnerships, increasing commerce and finding new markets.

Note from the CPD Blog Manager: This is part 3 of a photo essay series exploring Expo 2020 Dubai through historical context, individual country participation and public diplomacy opportunities through Expos. The author...