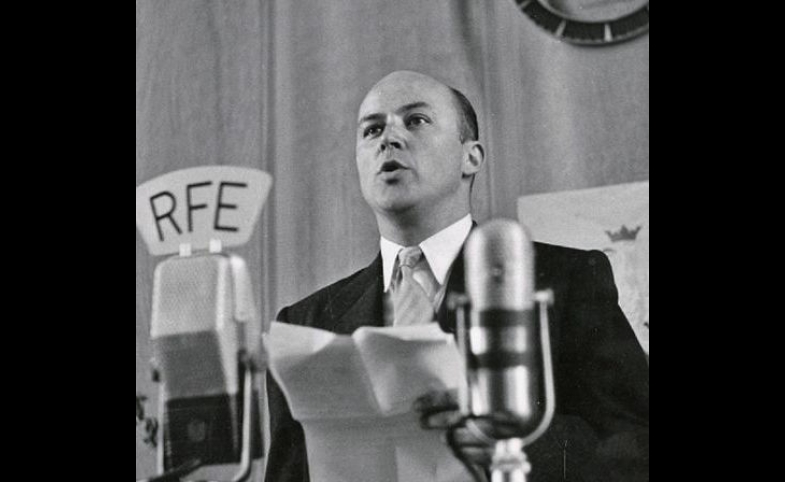 The Plus ça Change…

Having failed to pass reform in the last session, Congress is again deliberating how to restructure U.S. international broadcasting (USIB) to match the challenges facing American interests around the world. But the International Communications Reform Act, intended to “improve the missions, objectives and effectiveness of U.S. international broadcasters,” is once again stalled after enthusiastic passage out of the House Foreign Affairs Committee. And while the Senate has held hearings focused on USIB, just as before, no companion legislation has been introduced.

But in a recent speech declaring ineffective most U.S government efforts in response to messages from Russia, ISIS, China and others, Senators Rob Portman (R-OH) and Chris Murphy (D-CT) proposed the Countering Foreign Propaganda and Disinformation Act. It would create the Center for Information Analysis and Response and, ideally, “improve the ability of the United States to counter foreign propaganda and disinformation by leveraging existing expertise and empowering local communities to defend themselves from foreign manipulation.” Kim Andrew Elliott has written about their proposal elsewhere on this site. However ambitious, the Portman and Murphy effort is still just the latest in a series of condemnations of USIB’s perceived ineffectiveness in what scholars are calling a “global communications arms race.”

Amid the urgency of contemporary discussions, some historic context may be instructive. The truth is that today’s rhetoric about the need for effective messaging bears striking resemblance to a period 70 years ago when American political leadership was contemplating the merits of U.S. government-sponsored information activities in the post-war world.

In an executive order issued just days before Japan signed the instrument of surrender aboard the USS Missouri in Tokyo Bay, President Harry S. Truman called for postwar state-sponsored broadcasting that would present “a full and fair picture of American life and of the aims and policies of the United States Government.” The broadcasts would function as a source of accurate information about the United States in a complicated postwar world. But it was more than three years before passage of the Smith Mundt Act authorized such activities.

The delay brought heated public debate among individuals who held a range of views concerning the propriety of government involvement in such activities. Secretary of State James F. Byrnes declared, “Our purpose is, and will be, solely to supply the facts on which foreign peoples can arrive at a rational and accurate judgment.”[1] In contrast, James L. Knight derided as “ludicrously naïve” the idea that such efforts could promote democracy and the American way of life.[2]

Undergirding much of the talk about the need for messaging reform is the assumption that better articulation of American intentions abroad will solve many of the country’s foreign policy challenges.

It was only after what The Washington Post described as the “greatest legislative exploration in history”[3] in which dozens of U.S. representatives and senators traveled across Western Europe in late 1947 to evaluate the postwar environment, that horrified members discovered the Soviet Union was making significant inroads into public opinion across a continent that the United States had only recently helped liberate. Soon thereafter the newspaper declared “Almost without exception, members of Congress who toured Europe… have come back convinced of the necessity for expanding our international information program.”[4] Representative Karl Mundt (R-SD) summarized the results of the members’ travels saying, “We found in every country we visited that we are losing this war of words.” Upon passage of the legislation in early 1948, The Washington Post framed the bill’s success as “recognition of the significance of the battle of ideologies in which we are engaged.”[5]

Fast forward to today where House Foreign Affairs Committee Chair Ed Royce (R-CA) sounded very much like his colleagues from seven decades ago, declaring in The Wall Street Journal that Russia’s current misinformation campaign “may be more dangerous than any military, because no artillery can stop their lies from spreading and undermining American security interests in Europe.” Others supporting more effective messaging have framed the need in the context of newer, more transnational threats to American security. The Heritage Foundation highlighted the aggressiveness of foreign actors in spreading their own messages with the headline “Broadcasting Reform is Urgently Needed to Fight ISIS.”

Undergirding much of the talk about the need for messaging reform is the assumption that better articulation of American intentions abroad will solve many of the country’s foreign policy challenges. An op-ed appearing in The Wall Street Journal is indicative of this argument. In it, a former U.S. international broadcasting executive declared, “The U.S. has enduring interests in the world. We need to explain ourselves in the most persuasive way we can, and by the most effective means…”

And so, discussion about the need for the United States to talk about itself, its values and its views of the world has come full circle. The geopolitical landscape may look different. The technology may have changed. And there may be more competition for the attention of foreign audiences. But all such activity is still driven by an unquestioned assumption that the U.S. is merely misunderstood. Thus emerges a difficult question that few dare ask -- although it was first posed by John S. Knight almost exactly seventy years ago: “May I say that I sometimes wonder if the rest of the world is as eager to hear the American story as we think it is?”[6]

[6] Knight, John S. (16 April 1946). “World Freedom of Information: Press Associations Must Not Be Adjuncts of Diplomacy or National Policy,” Vital Speeches of the Day, p. 5.