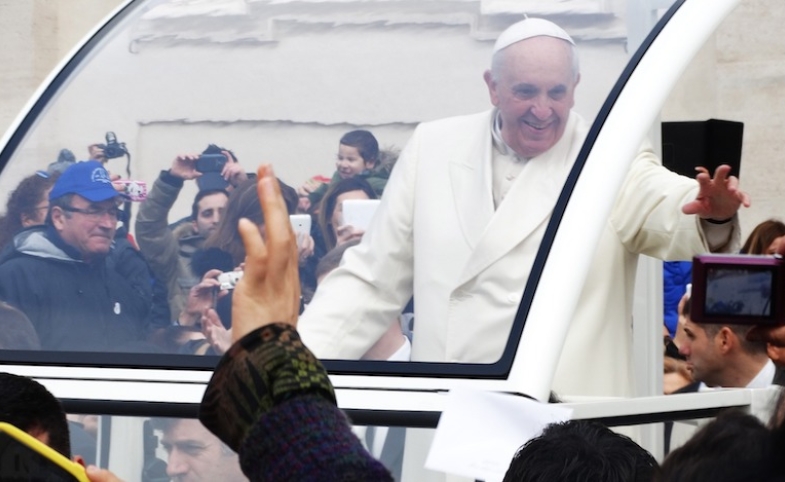 Some might find it surprising that the leader of the oldest institution in the Western world is determined to shape the course of tech development. Pope Francis is actively engaging with world leaders and corporations on using technologies to solve the most pressing challenges associated with climate change, poverty and migration (among others). The pope wants to create a culture in which tech innovation and social justice are fully integrated. The Vatican's strategy of direct engagement with the main tech innovators (e.g. Google and Facebook) has been largely successful because these organizations want to appear to be a solution to social problems, rather than their source.

The Pontifical Academy of Sciences, headquartered in Vatican City, is one of the primary forums that the pope uses for engaging with the global technology community. Pope Pius XI founded the modern Academy in 1936. Fundamentally, the Academy promotes scientific progress and evaluates the ethical and moral dimensions of scientific and technological developments. The Academy has had over 40 Nobel laureates among its members since 1936 and advises the pope on the latest developments in science and technology as well as the ethical challenges associated with them.

Pope Francis’s second encyclical Laudato Si’ (Praise Be to You) emphasized the social dimensions of technological transformation and unambiguously labeled climate change as a primarily human-made catastrophe. He went on to say that technology is a key contributor to the global environmental crisis and to human suffering around the world. He is greatly concerned about the increasing rapidity of scientific and technological developments and the potentially catastrophic impact that they might have on the world’s poorest populations. The pope does, however, believe that technology can also be used as a positive tool for social progress. This has been a central motivation for his direct engagement with the institutions and corporations that are the leading powers behind technological transformation in the world today.

Through direct engagement with the world’s innovation leaders, Vatican City has been transformed from a spectator into an active participant in shaping the path of technological evolution.

Since 2016, Pope Francis has personally met with the leaders of Facebook, Google, Microsoft and Apple. In each case, he implored them to foster technological progress with the goal of improving humanity’s condition. The pope presciently recognizes that engaging directly with corporate leaders is a more effective way of influencing the paradigm of technological change than attempting to work through government leaders who have a limited interest in affecting a primarily economic-centric model of technology investment.

Appearing to be attuned to issues of social justice and equality only enhances the public images of companies like Facebook that state their goal is to be a force for positive change in the world. Since the pope began engaging directly with tech leaders, a race has begun among the innovation giants (to include Facebook and Amazon) to develop satellites that can deliver Internet to the underserved regions of Africa. Clearly, Pope Francis’s tech diplomacy is having an effect.

In recent years, the pope has been taking direct steps to foster global technological innovation as well. In 2017, Vatican City served as a venue for a tech competition among startups attempting to develop solutions for climate change. Additionally, in 2018 Pope Francis hosted Vatican City’s first ever hackathon with over 120 students from 60 universities. Organizations have traditionally used hackathons to find “code-enabled solutions for everything from the opioid crisis to gerrymandering.” The Vatican’s hackathon objective was to find technological solutions that foster social inclusion, interfaith dialogue and assistance for migrants and refugees. The pope is exhorting young students and professionals in tech and science to create an environment in which social issues are a central rather than a peripheral consideration. Leading innovation tycoons in Silicon Valley have fully endorsed the Holy See's efforts.

Few would have expected the Vatican to become a central player in the rapid technological transformations taking place in the world today. The pope recognizes, however, that technological change is one of the most powerful forces affecting the human condition. Through direct engagement with the world’s innovation leaders, Vatican City has been transformed from a spectator into an active participant in shaping the path of technological evolution. Thus, the pope has been instrumental in creating a new model of innovation that elevates social justice above purely economic considerations.

Diplomacy in the Age of Artificial Intelligence

Note from the CPD Blog Manager: A previous version of this piece was originally published by the Elcano Royal Institute. Riding the waves of growing interest about artificial intelligence (AI) in international relations...

In the age of social media, limitless opportunities have emerged to use this landscape for public diplomacy. A highly capable yet under-utilized platform within this system is Instagram, which encourages user-generated...