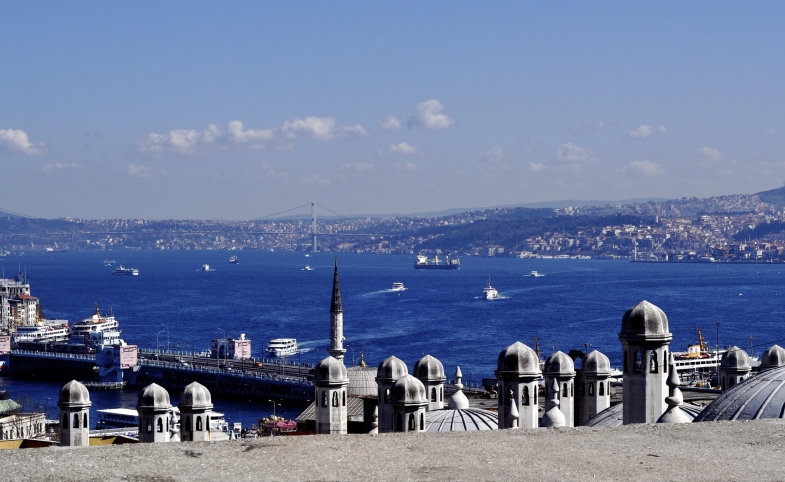 ISTANBUL --- While drinking tea by the Bosphorus a few days ago, I looked up and there sailing past me was the Moskva, a formidable-looking Russian missile cruiser returning home from its mission in support of Russia’s Syrian pal, Bashar Assad.

Amidst the steady stream of tankers and merchant ships crossing between the Mediterranean and the Black Sea, the Moskva was a reminder of the immense strategic value of this narrow stretch of water and Turkey more generally. Literally a bridge between Europe and Asia, Turkey possesses the political stability (a relative term), economic vitality, and military strength to play an ever greater role in its tumultuous region and beyond.

During the recent brawl between Iran and Saudi Arabia, Turkey was the adult on the scene. While numerous other countries in the region devoted themselves to diplomatic theater, Turkey embraced realism, telling its neighbors that they should not be executing people or storming embassies.

That is the kind of leadership Turkey could display more frequently. It often, however, prefers to chase its tail, waging war on Kurds and remaining obstinate in its relationships with Greece about the future of Cyprus and with Armenia about the realities of history. On a broader stage, Turkey’s role as the only Muslim nation that is a member of NATO means it will be increasingly relied upon as NATO finds itself focusing more intensely on the Middle East.

From Troy to Gallipoli to present-day strife, Turkey has been at the center of conflicts and other events that have changed the world. It now must decide what kind of continuing role it wants to play in that larger world.

When it comes to Turkey portraying itself to the world, its leaders say all the right things about public diplomacy and the country’s desire to be less insular. But despite having an alluring business environment and being a magnet for tourists, Turkey has yet to fully address more substantive matters related to its identity. Its leaders need to answer a big question: What does Turkey want?

It is a de facto regional power, but does it want to wield greater global influence? Will it continue to be a secular Muslim state, or will it drift into the more conservative religiosity of its neighbors? Despite being shunned for so long by the European Union, will it do more to help Europe manage the westward flow of Arab refugees? Will it act more forcefully to counter the influence of the Islamic State? How will Turkey position itself both within NATO and independently in response to Russia’s activity in the region?

Along with these “big issues” are more conventional public diplomacy matters. Educational exchanges with countries such as the United States are invaluable, but of the more than one million foreign students studying in the United States, fewer than 11,000 are from Turkey. (China has the most, more than 300,000.) Turkey is perceived as exotic, but its history and culture, covering many millennia, are appreciated by few outsiders. As with all democracies, it has its flaws, but it has done too little to display its strengths, even while the world’s news media are quick to highlight its weaknesses.

From Troy to Gallipoli to present-day strife, Turkey has been at the center of conflicts and other events that have changed the world. It now must decide what kind of continuing role it wants to play in that larger world. Monitoring the level of assertiveness in Turkey’s foreign policy and its public diplomacy may provide some hints about how willing it is to assume greater responsibilities.

I was in Istanbul recently to give a talk at a forum on Turkish public diplomacy co-hosted by NATO and Bahçeşehir University Centre for Security Studies. Titled “Changing Region: The Role of Turkish Foreign Policy and Soft...