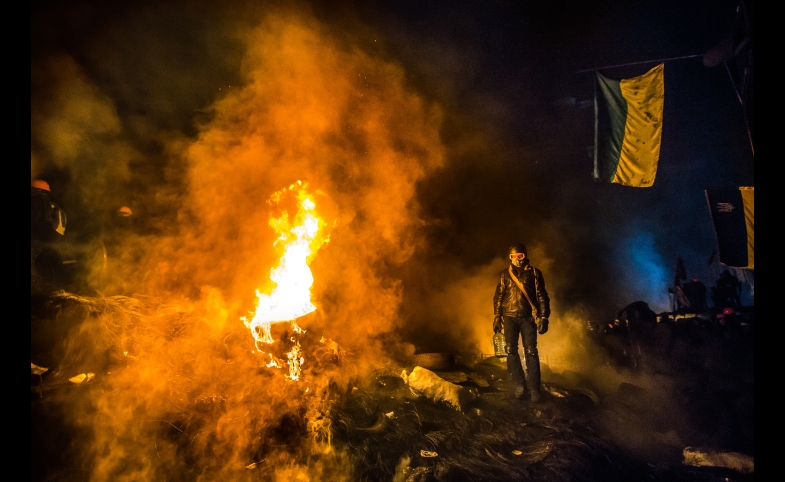 For Your Consideration: Ukraine

The Academy of Motion Picture Arts and Sciences awards its Oscars on Sunday, and one of the nominees in the category of Best Documentary Feature is “Winter on Fire: Ukraine’s Fight for Freedom,” a chronicle of the 2013-14 protests in Kyiv.

The competition for Best Documentary is always stiff, but the fact that a documentary film about the crisis in Ukraine was even nominated for an Oscar is an important achievement—and not just in filmmaking.  The attention that the Netflix production will receive—win or not—will educate and remind viewers about what happened in Ukraine following Viktor Yanukovych’s decision in November 2013 to bow to pressure from Moscow and not sign an association agreement with the European Union.

The resulting 93-day test of wills between unarmed protesters and heavily armed security police ended, in a sense, when Yanukovych fled Kyiv in the middle of the night on February 21, 2014 and was granted exile in Russia several days later by Vladimir Putin. “Winter on Fire” tells the story of these three months with extensive footage, including vignettes of some of the protesters who were gunned down by security police in the escalating violence.

"When a documentary is produced that gives a compelling history of what happened on Kyiv’s Independence Square, and that documentary is nominated for an Oscar, it becomes one of the few ways of getting the spotlight back on Ukraine."

Watching “Winter…” it’s hard not to share in the euphoria of the moment when the throng of protesters learns that their demands have been accepted, Yanukovych has left, and that new elections will be held.

Although this is the end of the movie, it was only the beginning of the off-screen challenges confronting Ukraine’s new government. Within weeks, Putin dispatched Russian troops to seize control of Ukraine’s Crimean Peninsula. A few weeks later, with Russian support and direction, rebels in Ukraine’s far east provinces of Luhansk and Donetsk declared their independence from Kyiv and formed “people’s republics.”

In fighting over the next 18 months, more than 9,000 people were killed and millions displaced from their homes. Hundreds of those casualties were Russian soldiers, who flooded across Ukraine’s eastern border, backed by Russian Federation military and intelligence resources.  Journalists, notably the BBC, courageously documented the conflict, but this “fight for freedom” still awaits full-length, comprehensive documentary treatment.

Now, of course, there’s an international cease-fire, which means that this “frozen conflict” has dropped off the radar of international news media.

We should remember that there’s nothing “frozen” about the information war still being waged by Moscow. Ukraine continues to be the target of an intense propaganda and disinformation campaign—part of a larger Russian media war on Europe and the West.

The Western response has been paltry: some aid for independent media in Ukraine and the region, but little ability to tell America’s story—much less Ukraine’s—within the confines of the Russian Federation.

When Brookings or CSIS or the Atlantic Council has a press conference, a Sputnik or RT correspondent is sure to be there.  Radio Liberty and VOA have had their bureaus in Moscow shut down, which diminishes their ability to report on what’s going on.

So the upshot is, when a documentary is produced that gives a compelling history of what happened on Kyiv’s Independence Square, and that documentary is nominated for an Oscar, it becomes one of the few ways of getting the spotlight back on Ukraine and helping to get word back to Russian society regarding what really happened in Kyiv during that “winter of fire” just two years ago. Since Netflix is a streaming service, it may be possible even to make it accessible in Russia. As filmmaking or public diplomacy, that’s worthy of consideration.

Photo by Sasha Maksymenko I CC 2.0