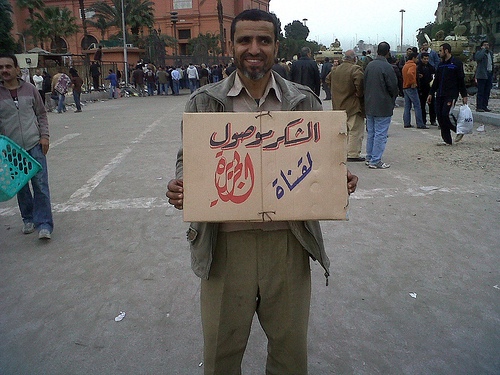 First, let’s be clear that this was the Egyptian Revolution, not the “Facebook Revolution” or the “Twitter Revolution.” Events of the past few weeks belong wholly to spirit of the Egyptian people, not technology. And although it was built on democratic aspirations, this was not a revolution that drew any inspiration from the United States.

Think about that. In China’s Tiananmen Square in 1989, there was a Statue of Liberty-like model and many signs written in English as protesters there looked toward the nation that was seen as a beacon of freedom, born of a revolution of its own. In 2011, in Cairo and Alexandria, the signs in English read, “Thank you, Al Jazeera.” When Egyptians in the streets commented about the United States, they were almost always critical of the country that had for so long propped up the corrupt and vicious regime of Hosni Mubarak.

Given all this, the relationship between the United States and the Egyptian people requires prompt and thoughtful rebuilding. There will be other suitors, such as Iran, and extremist voices will emerge. The Egyptians, however, are unlikely to entangle themselves with any outsiders unless it is clearly in their own interest to do so. That points the way toward a reconceived public diplomacy effort by the United States.

The U.S. State Department’s recently released Quadrennial Diplomacy and Development Review stresses the essential nature of development assistance in American foreign policy. In public diplomacy, this means there should be less emphasis on advertising the virtues of the United States and more effort devoted to serving the people to whom this diplomacy is directed. Job training, health care, and other such programs that will directly affect the lives of individuals are what matter. People want to earn a living, have clean water, and keep their children healthy. If the United States can escalate its work to accomplish those tasks, it will win friends.

Unfortunately, U.S. public diplomacy is not built along these lines. Its outlook is myopic, with a focus that extends no farther than practices rooted in Cold War philosophy. Consider the delivery of information in an increasingly Internet-centric world. A 2009 Harvard University study of Middle Eastern blogs found that the Arabic-language news channels Al Jazeera and Al Arabiya ranked near the top of the list of bloggers’ outward links. The U.S. government’s Al Hurra channel was number 2,871 on the list. Lots of U.S. taxpayers’ money is being spent to accomplish very little.

Egyptians and others in the Arab world will not be satisfied by communication without substance. President Barack Obama learned this when his magnificently written 2009 speech in Cairo produced only a temporary improvement in Muslim opinion of the United States because the follow up, in terms of policies that really mattered in people’s lives, was mostly non-existent.

Public diplomacy is not an exercise in altruism; it should serve the national interest. But it cannot do so as long as much of U.S. public diplomacy is seen by the rest of the world as self-serving propaganda, and is dismissed as irrelevant. To begin to fix this, Secretary of State Hillary Clinton should order a top-to-bottom review of U.S. public diplomacy, searching for successful efforts that can be used as models and finding the deadwood that should be tossed aside.

Above all, the philosophy of U.S. public diplomacy should be altered to put greater emphasis on service to the individuals around the world whom America wants to court. This is the only way public diplomacy will work in the new Egypt.

Philip Seib is a professor at the University of Southern California and is director of USC’s Center on Public Diplomacy.