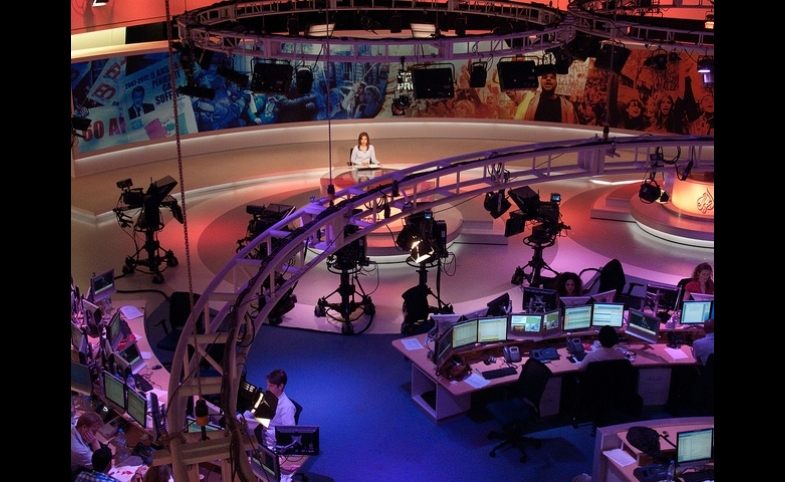 China and Russia are fighting a heated war with the United States. It is an intense battle of words and ideas fought between state-sponsored broadcasters, on the airwaves, and online.

In 2011, then-Secretary of State Hillary Clinton said straightforwardly that the U.S. is “engaged in an information war.” She concluded her analysis to the Senate Committee on Foreign Relations by saying that in the fight against emerging international broadcasters, “we are losing that war.”

As Clinton knows, the rules of engagement have changed with new information technology and in the new information ecology. During the Cold War – pre-Internet, of course – American and allied broadcasters used antenna-based systems that allowed Western news and entertainment programming to cross the Iron Curtain and get beyond authoritarian state borders.

The general consensus is that the steady drumbeat of credible Western broadcast news critical of the communist regimes during the Cold War helped bring about the fall of the Berlin Wall and the dissolution of the Soviet Union. But the impact of Voice of America, Radio Free Europe, Radio Marti, Radio Free Asia and others is now being challenged by growing competition in the struggle to dominate global news narratives.

In Britain, the BBC and its World Service has been cutting back and is under growing budgetary pressure. In the U.S., lawmakers argue that the organizations underwritten with American taxpayer dollars, and managed by a relatively independent and sometimes feckless Broadcasting Board of Governors, have been unable to keep up with the times or meet post-Cold War challenges. This shift occurs at the same time that traditional market-based media properties – newspapers and magazines, primarily – are experiencing a business model collapse. Their foreign correspondents and bureaus are now mostly part of a quaint and romantic recent past.

Partly in reaction to the dynamic shift in global newsgathering and distribution systems, the chairman of the House Committee on Foreign Affairs, California Republican Ed Royce and ranking committee Democrat Eliot Engel of New York, co-sponsored a bill to harness American international broadcasting operations, dissolve the Broadcasting Board of Governors, and make government-sponsored news and information services more nimble, responsive and forward-leaning in their offerings. They would like these resources to be more focused on “public diplomacy” and serve America’s national goals abroad.

The bill passed unanimously out of committee last month. Its goal is to create a “Freedom News Network” to counter contemporary challengers, and to make sure that America’s perspective and foreign policy goals are more systematically promoted and propagated. To date, and with varying degrees of success, these U.S. broadcasting entities have operated independently and with journalistic integrity.

The bill’s intent, according to Engel, is to make sure that American broadcasters remain trustworthy. “It’s absolutely critical that the news be accurate and seen as credible by the foreign audiences we’re trying to reach,” Engel said at the House hearing in April, and that they function “not simply as a mouthpiece for U.S. foreign policy.”

American leaders fear that the growth of international broadcasters mainly from Russia and China – although there are a few others, like Iran and Qatar – are battling for a portion of the ideological high ground. They sense that these new global news networks aim to instill their values, interests, and preferred policy narratives to a more susceptible global audience. Western policymakers see a troubling trend with global public attitudes slowly shifting and people aligning with competing systems and away from American ideals and values.

New broadcast entities with counter narratives are not the main reason for any ideological shift away from America: the wars in Iraq and Afghanistan and the global economic recession make up a big part. It is not just who tells a story, or even how you tell a story. First and foremost, it is making sure you have a good story to tell, and America’s recent wars were bad stories and worse realities.

Regardless, at the same time as this public realignment of attitudes and beliefs, there is also a global move away from dependence on formerly dominant and traditionally trusted, authoritative Western news sources. Unlike in the past, a more globally interconnected public raises the question of whether Al-Jazeera or Voice of America is a better source for news regarding Egypt, Syria, Libya, Iraq and Afghanistan. They ask whether Russia Today, with its high profile Web presence and competitive television offerings, is presenting a more balanced story than Radio Free Europe about Ukraine, Poland, Hungary, Slovakia and Bulgaria.

In every one of the countries listed above, the United States is invested in material terms or somehow militarily engaged. In none of the countries was there a credible alternative global news source in existence a generation ago. In the new communications world where news and information is loudly and sometimes credibly contested, who does one trust?

Important and reliable commercial international broadcasters like CNN have been mostly motivated by nothing other than expanded reach in order to sell more – and more expensive – advertising. State-sponsored broadcasters, however, are engaged in financially unprofitable activities that range from informing a distant diaspora to organizing dissent and fueling, if not outright inciting, revolution.

My work in the 1980s and 1990s at international broadcasters, including Radio Sweden International and Germany’s Deutsche Welle, exposed me to how national foreign policy goals are pursued and what is considered a return on state broadcast investment. I also learned what was considered a bad investment. In one instance, I produced a shortwave radio program that was hypercritical of Swedish political practice and, as a result, a station director told me the Foreign Ministry heard it and strongly disapproved. I got the message.

The battle for the eyes and ears – and perhaps a path to the hearts and minds of a nation – advanced on New Year’s Day 2013 when Al-Jazeera was announced as the buyer of the Current TV network. Al-Jazeera, the Qatar-based network that is at times derisively referred to as the al-Qaida network because it received and aired Osama bin Laden video messages, had been trying to break into the American television market for years. The reported $500 million purchase of Current TV not only made the owners, former Vice President Al Gore and his colleagues, a little richer, it gave the broadcast award-winning Al-Jazeera the coveted American national distribution it long sought.

While money may appear to be no object for the Qatari emir, the question that hangs in the air is this: Why would anyone buy a money-bleeding enterprise like Current TV? Why, for that matter, does any state broadcaster expend billions of dollars annually to achieve a marginal global viewership for programming that is often considered by viewers to be flat-out propaganda?

Influence is key. A nation can deploy these networks and their programming to gain a more favorable view of its own culture, history, society, economic system and government leadership while having a profound impact on international agendas and policies. This is called “soft power.”

If “hard power” is the traditional understanding of boots on the ground, aircraft carriers at sea and B-2 bombers flying overhead to make other countries do what you want them to do; then soft power is that intangible ability to get other countries to want what you want through persuasion. One is coercive; the other is attractive. Together they are a carrot-and-stick approach that has come to be known as “smart power.”

Political leaders around the world are looking to find that perfect combination of hard and soft power to get their smart outcomes. On the power spectrum, broadcasting and state-sponsored social media fall firmly on the soft power end. The theory that some public diplomacy practitioners push is that nations can use smart power to avoid tough military or diplomatic confrontation. They believe that international cultural and educational exchange, language learning and big broadcast networks are effective soft power tools. In their worldview, if information is power, then the smart use of information can be very powerful.

Al-Jazeera’s pursuit of a broader global audience has a Moscow parallel, Russia Today, which is also making a push to expand its network, programming and distribution. A direct descendant of an earlier, clunky Soviet propaganda service, the slicker Russian international broadcaster has made huge inroads with overseas audiences, in particular online.

Tune in to Russia Today and you can watch conventional programs like “Larry King Now” or “Venture Capital.” On some recent programming, however, Russia Today’s party line bias was so heavy-handed that it prompted one anchor to resign on-air in protest over the Kremlin’s Ukraine policy. D.C.-based Liz Wahl went off script on the RT-America program, saying, “I cannot be part of a network funded by the Russian government that whitewashes the actions of Putin. I’m proud to be an American and believe in disseminating the truth, and that is why, after this newscast, I’m resigning.” Another RT host, Abby Martin, strayed from the party line, going rogue on-air by saying, “Russian intervention in the Crimea is wrong.” Even some Russian diplomats privately complain that the channel’s over-the-top Kremlin favoritism is counterproductive.

Western politicians know there is one country in particular that has learned the lessons of a strong international broadcast presence: China.

Chinese state policies are focused on growing the print, broadcast, Web and mobile networks of state-run Xinhua news agency and China Central Television, CCTV. Beijing is fueling a dramatic increase in foreign corresponding bureaus, reporters, editors and broadcast stations, as well as information gathering and dissemination infrastructure around the world. The investment is leading to exponential growth of presence and production. As Orville Schell, director of the Center on U.S.-China Relations at the Asia Society, once put it: “While our media empires are melting away like the Himalayan glaciers, China’s are expanding.”

For sheer size, ambition and growth, the combined behemoth of China’s Xinhua and CCTV stands alone. In fact, according to the Columbia Journalism Review, the Chinese government has already “built the world’s largest news organization” with a well-funded effort estimated to be “19 times the annual budget of BBC.”

Congress is taking baby steps to catch up and harness the public diplomacy power of America’s international broadcasters, but a future where Western values and interests predominate will also depend greatly on the survival and success of American private journalistic institutions. That outcome is far from assured. In the meantime, China and Russia are investing heavily to win the information war and they are doing it right in front of our eyes.

This piece was originally published by The Sacramento Bee.