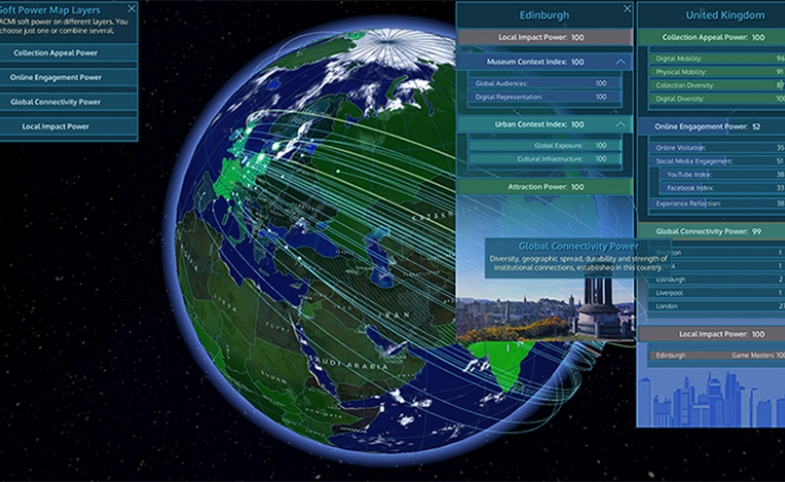 In recent years, Joseph Nye’s concept of soft power, defined as a country’s ability to influence the behavior of others through persuasion and attraction, has gained strong international popularity.

Soft power offers an alternative solution to addressing the complexity of international relations by employing culture as the foundation of international influence. A country on the international stage can achieve this influence by building networks, communicating compelling narratives, establishing international rules and drawing on key resources that make it naturally attractive to the world.

Interestingly, soft power as a concept started to be employed not only in relation to countries as main actors on the world stage, but also to non-state actors, such as museums. Appropriating the concept of soft power, museum studies scholars look at contemporary museums as key actors in the international arena that are capable of exerting significant economic, cultural and social impacts within and beyond national borders. For example, Gail Lord and Ngaire Blankenberg in their recent book, Museums, Cities and Soft Power, stress that in the 21st century, museums turn from sites of branded experience to “places of soft power.” Tristram Hunt, Director of the Victoria and Albert Museum (V&A), in a recent CPD Blog post argued that the museum’s international collections across sites and loan venues in different countries are a tool of diplomacy. He stressed that the V&A touring exhibitions, reaching a million visitors across many countries, as well as numerous partnerships across cultural institutions and civil society at home and abroad, generate soft power. They “provide an innovative, and often revolutionary, sense of what contemporary British culture and identity can offer.”

Though the concept of soft power has been increasingly employed by museums to explore their growing visibility, reach and impact beyond their home sites, there is still not a clear understanding of what museum soft power is, which museum resources and activities accumulate soft power and what social-demographic factors maximize this power in different geographic locations. Another important question that has not yet been raised either in academia or in the professional museum world is: How could we explore and demonstrate museums’ soft power without putting them in opposition to each other as competitive actors on the world stage, especially considering their complex institutional ecosystems? International exhibitions and blockbusters, franchise branches in different cities, and professional exchanges and collection loans, which are the key sources of museum soft power, are not really possible without strong partnerships across institutions, local governments and civil society.

This project reveals that soft power is not a universal “omni-force,” equally impacting audiences across the world, but a variable, shaped by local social-demographic, cultural and economic factors.

My research-creation project, “Deep Mapping: Creating a Dynamic Web Application Museum ‘Soft Power’ Map,” addresses these questions by developing new computational methods that can map and assess museum influence and attraction power in different geographic locations. Developed in collaboration with the Australian Centre of the Moving Image (ACMI), the project successfully trialed a pilot web application, ACMI Soft Power Map. It is a focused, single-museum online tool to geo-visualize and assess the ACMI’s “attraction power” in Melbourne and abroad.

Having its roots in the State Film Centre, which was established in 1946 to maintain a film archive for public use, ACMI houses the nation’s largest collection of moving image documents. It was founded in 2002 in Federation Square, the so-called heart of Melbourne, and has become an iconic city landmark that attracts around 1.5 million visitors each year. With a diverse collection of hundreds of foreign language films representing a wide variety of cultures across the globe, ACMI runs dozens  of international tours and projects annually to pursue its vision to “be the leading global museum of the moving image.” For example, in the last decade, two of its famous blockbusters, such as Game Masters and DreamWorks Animation, toured 16 host cities across the Asia-Pacific, Europe and the Americas, building its international brand and “reputation for world class exhibition experiences.”

With a strong ambition and a well-established strategic program to transcend the geographic boundaries of its global reach and visibility, ACMI, as a partner in the project, provided rich geo-spatial data that allowed the development of the multilayered mapping system. The pilot web application, ACMI Soft Power Map, advances the current measurement framework by combining traditional approaches to public diplomacy and soft power evaluation, including measuring resources and evaluating outputs in terms of audiences and activities, with analyzing networks. Employing geo-visualization, the digital platform exposes and explores correlation in geographical layers of museum data on several levels, including collections, online and onsite audiences, international activities and constituencies. This multilayered mapping not only identifies measurable sources of museum soft power, but, most importantly, it reveals how exactly they relate to local factors, which shape the social-demographic contexts of museum influence.

This multilayered mapping system aggregates and correlates a large amount of data to visualize institutions’ global ecologies through the geography of each’s collections, programs, audiences, partners and stakeholders. At the same time, it reveals multiple factors, including linguistic, cultural, economic or socio-demographic, that define the degree of soft power generated in different locations. The power impact is calculated across layers for each country as a weighted sum of multiple variables. It is represented through an index (ranging from 0 to 100) and is visualized on the global map with color coding. The mapping framework advances existing systems of soft power measurements by visualizing soft power’s geographical reach, an important variable that is usually missing in existing soft power evaluation dashboards systems, like Portland's Soft Power 30.

The museum soft power mapping system employs the cultural analytics and census statistics of a specific location to evaluate the soft power appeal to people living in this area, considering it is a politically, culturally and economically defined locale. This project reveals that soft power is not a universal “omni-force,” equally impacting audiences across the world, but a variable, shaped by local social-demographic, cultural and economic factors. This focus on the geographic diversity of soft power’s impact across countries reconfigures the competitive framework of soft power evaluation that implies that institutional actors on the global stage are rivals. Instead, the system reveals and emphasizes institutional interdependencies and complex interconnections by visualizing multiple links that exist between the museum and its institutional partners across the globe.

While the pilot project offers a thought-provoking approach examining museum soft power in the 21st century, it is only a first stage in the development of the soft power mapping app for a universal use among museums. Plans are now underway for this pilot to be further re-designed in collaboration with museums around the world.