Home|Independence Movements in Scotland and California 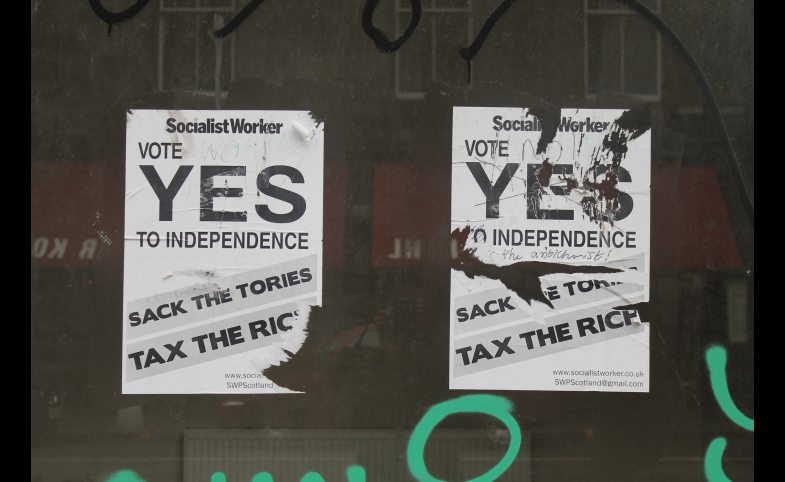 Boris Johnson is the colorful mayor of London who wanted to be “World King” when he grew up. Boris, as locals refer to him, promotes a more inclusive London and open policies that would throw open the doors to foreigners, saying, “I’m one of the politicians willing to stand up for immigration."

London is a hyper-cosmopolitan capital where you are as likely to see hijab scarf-covered women browsing around Harrods as you are to see a bloke eating a banger breakfast at a local pub. Russian oligarchs and Saudi princes are exclusive London club habitues and scoop up seven-figure flats in the poshest neighborhoods. It is a London that looks like the world, is open to the world and is expanding its reach toward the rest of the world.

As London reaches out and globalizes, however, there are reactive domestic political forces that prefer to look inward. Some movements in the United Kingdom – and elsewhere around the world – aim to slow things down, make them more native and comprehensible, while pushing for more limited, defined identities and smaller political, economic and cultural boundaries. To do so, these forces look to blow up existing structures.

The widely witnessed reaction to uncontrollable modern pressures is often a cry by the increasingly hopeless and powerless for more control over their societies and systems, and against rapid global change. It is a call for control fed by fear.

In the United Kingdom, the Scottish independence movement is in full swing and racing toward a Sept. 18 referendum vote. A “yes” outcome turns Scotland into an independent country. And while Scotland may want to be alone, it is not alone in its desire for more autonomy from larger, more globalizing forces and institutions. There are popular British calls for England to divorce itself via referendum from the European Union. Conservative Prime Minister David Cameron says, “I will hold that referendum before the end of 2017 and respect the decision.”

Lest one believe these separatist movements are old-world artifacts and rarified reactions to globalization, young and dynamic California is on the independence bandwagon with its November 2016 referendum election for “Six Californias,” an attempt to break up the state six ways.

In Scotland, the referendum election outcome is considered a toss-up, which is why the United Kingdom unity movement is bringing out celebrities like singer David Bowie, author J.K. Rowling and actress Emma Thompson to campaign against Scottish separation. Going brogue and supporting a “yes” vote for independence is heavy-hitting “007” actor Sean Connery.

In both the “Six Californias” and Scottish referenda, an affirmative vote would lead to both winners and losers, be a seismic political shift and have perilous consequences. Representation would be more direct, but perhaps have fewer checks. The electorate may feel more proximate to its leadership, but not necessarily engaged. In Scotland, questions abound. Will it need its own new currency? Will it remain a part of the European Union? There are more unknowns than there are knowns.

Ultimately, if the Scots decide to stick with the U.K., it will be a vote for a Britain that looks and behaves a bit more like London. In California, a vote for unity will be for a future that resembles a cosmopolitan Los Angeles. Regardless of any ostensible breakup benefits, a continuously integral and unified California will be a state with the great throw weight it currently has at home and abroad.

In an odd way, popular electoral reaction to modernization, growth and globalization is similar – though vastly different in scale and intensity – to the extremely violent reactionary forces dominating today’s headlines.

The armed Sunni militias of the Islamic State of Iraq and Syria are fighting against any threat to their idealized caliphate and against all things “infidel.” Similarly, reactionary Shiite forces brought Ayatollah Ruhollah Khomeini to power in Iran in 1979, bringing down a tyrannical shah and modern Tehran. The widely witnessed reaction to uncontrollable modern pressures is often a cry by the increasingly hopeless and powerless for more control over their societies and systems, and against rapid global change. It is a call for control fed by fear.

In the U.K., London has led the country into its globalized present in much the same way that California has led the world into the future. If Boris represents anything, it is a willingness to lead where others sometimes fear to tread and say things others dread. Scotland may miss its independent traditions, have historic grievances and harbor contemporary fears, but deep down, Scots need to know there is no turning back. Boris hopes to show the way if his leadership dreams eventually get him to No. 10 Downing St.

Similarly, Californians must know that their future is not in the novelty of a split-up superstate but rather as part of an even larger regional reality that eventually erases borders between itself, neighboring states and even other nations – the way that California-created technology has erased communications borders between all peoples. For further validation, Skype a friend in Scotland to see what she thinks.

This article originally appeared in The Sacramento Bee.