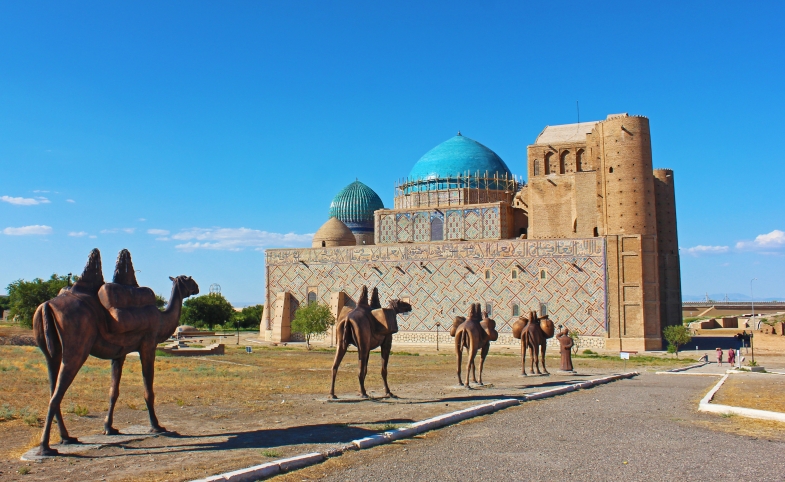 Recently, while surfing around the Korean internet, I bumped into one fascinating ad. It said that the new Korean International University in Ferghana (KIUF) in Fergana, Uzbekistan was about to open its doors, and new professors and instructors were wanted.

It is not a new phenomenon for Uzbekistan to host international campuses of universities based abroad. Universities from Russia, Singapore, Italy, Korea and the UK already have founded international branches in the capital city of Tashkent. But the Korean International University in Ferghana (KIUF) is the first international higher education institution that is based in the city with a population of approximately 280,000, of whom about 40 percent are under the age of 25. It is relevant to assume that this kind of education facility will educate young people who either will continue their educational career in Korea or will find jobs in Uzbekistan with companies that are funded or operated by Korean stakeholders.

The overall relationships between Korea and Central Asian countries (Kazakhstan, Kyrgyzstan, Tajikistan, Turkmenistan, Uzbekistan) are exceptional, and education plays a very significant role. Exchange programs are usually counted as instruments of public diplomacy that operate within a framework of education. However, education can be a tool for a country’s public diplomacy in quite a broad range, and it is not limited to exchange programs.

Korean use of education as a tool to approach Central Asian publics is very diversified, from quite massive to very selective, targeting different types of age groups from different regions.

Korea’s approach towards Central Asian republics seems to be quite diversified and innovative. I could identify seven different types of education channels through which Korea exercises its public diplomacy and approaches carefully selected individuals as well as wider segments of populations.

It is the flagman scholarship program that targets international undergraduate and graduate students. The program covers all expenses, and students are supposed to complete a language course in Korea and then obtain an academic degree from one of the selected Korean universities. One of the main goals of the program is to generate a pro-Korean international network around the world who would further contribute to Korea’s success in foreign countries. On the other hand, the program does not require graduated students to return to home countries, and they either stay in Korea or go to other countries. Additionally, the program is quite selective, and the amount of students coming from Central Asian countries ranges from 5 to 25, depending on a quota for each county.

The Korea International Cooperation Agency (KOICA) is the central organization that conducts and supervises Korea’s activities aimed at helping developing countries eliminate poverty and encourage socio-economic growth. KOICA, as a leading organization focusing on international development and cooperation, is in charge of Korea’s ODA implementation. KOICA mainly runs vocational and tertiary educational projects around the world. Educational programs might include degree and non-degree short-term and long-term training. One of the main KOICA tertiary education programs is CIAT. The CIAT is a highly competitive program for citizens from developing countries already enrolled in governing structures and research institutes, and who will continue working after completion of their studies. Hence, graduates of these programs facilitate government-supported projects between Korea and home countries.

Another quite selective program is targeting ethnic Koreans whose ancestors were transferred to Central Asia during the Soviet era. Young ethnic Koreans are offered opportunities to gain higher, additional or vocational education in Korea. OKF executes a set of cultural programs locally, like providing Korean schools and Korean language schools with textbooks, other necessary materials, financial assistance and more. In this regard, Korea considers ethnic Koreans from Central Asian countries not only in terms of return migration and demands of the labor force in Korea but also as a connecting element between the Korean government, Central Asian governments and publics.

Transnational education is a less selective approach that reaches wider masses and facilitates cooperation in areas relevant not only to big corporations, but rather SMEs (small and medium-sized enterprises). So far, three Korean higher education institutions have opened branches in Uzbekistan, but the effect can be spread regionally because international students can enroll. This practice is rather new, and the first international campus of Korea’s university (Inha) opened only in 2014.

Another type of education that also can fall into the folder of transnational education is vocational education. Vocational Education Training (VET) centers do not provide the graduate with a degree; however, they re-educate, train an individual, and certify a person’s professional skills. Korea built several VETs in Uzbekistan (three constructed), and three more are not open yet (two in Uzbekistan and one in Turkmenistan). VETs contribute to the creation of a qualified workforce necessary for Korean enterprises operating in Korea and Central Asia and for local needs.

The core institutions providing language and culture education and promoting Korean education on behalf of the Korean government are King Sejong Institutes and Korean Education Centers. The Korean language is also taught in HEIs around the region, in secondary education institutions like schools, colleges, and lyceums, in numerous language centers and by private tutors. So far, King Sejong Institutes are active in all Central Asian countries, except Turkmenistan, but the first one is expected to be opened soon. Korean Education Centers work in Kazakhstan, Kyrgyzstan and Uzbekistan. Through these types of institutions, Korea promotes, teaches and raises awareness about Korean language and culture among the broader audience across the region.

Finally, the emerging area in this domain is pre-school education. In Uzbekistan, the first experimental kindergarten was reconstructed following Korean standards, and instructors received training from specialized Korean institutions. Through this pre-school approach, Korea might find ways to the hearts and minds of Uzbekistan families whose children attend this kindergarten. It is yet unclear whether children will be studying the Korean language (so far the study program includes English and Russian), but they are taking first steps in becoming aware of Korean culture because they will have a class where they can play different national instruments, including Korean ones.

Korean use of education as a tool to approach Central Asian publics is very diversified, from quite massive to very selective, targeting different types of age groups from different regions. Korea approaches not only individuals who will become decision-makers in government and private organizations, but also their families because education can turn into better job opportunities for breadwinners (i.e., higher incomes for households). It is difficult to harvest outcomes of such complex public diplomacy through educational means, but it is fair to expect growth of Korea-related businesses in the region where Central Asian citizens will be employed, and greater awareness about Korea among Central Asian citizens.